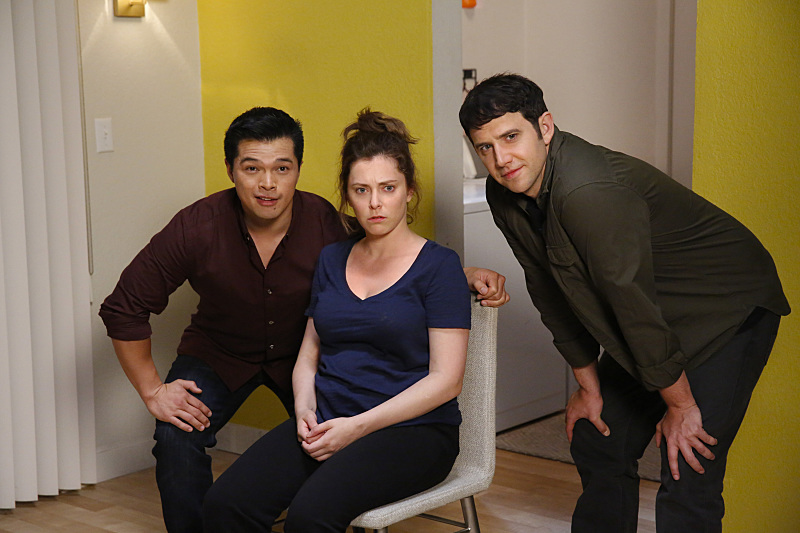 Crazy Ex-Girlfriend Season 2 Episode 4 Review: When Will Josh and His Friend Leave Me Alone?

Spoiler Alert: THIS EPISODE WAS AWESOME! Yes, the episode is awesome and could quite possibly be the best episode in the series thus far. With that being said, this review will contain a ton of spoilers so be warned.

In the last episode of Crazy Ex-Girlfriend, we learned that Greg was leaving for Atlanta. We see Rebecca rushing to the airport hoping to convince Greg to stay. That is precisely where this episode opens. Greg admits that he loves Rebecca but says that he must move on. He proceeds to sing “Shitshow” which describes Greg’s and Rebecca’s on again, off again relationship to a T.

Despite sharing a very heartfelt moment through this comedic song, Greg leaves for Atlanta and Rebecca returns to her apartment upset. Rebecca turns to Paula for support but feels like Paula can’t relate to her current situation. This makes Paula feel uncomfortable because she is dealing with her own struggle of whether or not she can go to law school while being pregnant. Paula returns home only to be met with more frustration. Her one son has gotten suspended and her husband Scott refuses to help out around the house.

Meanwhile, Rebecca is at home trying to understand what is going on with her life and why Josh and Greg don’t want to be with her. Greg and Josh appear in ghost form or as Greg puts it as Polterguys. The two sing “We Tapped That Ass” and after which Rebecca decides to get rid of all Greg’s and Josh’s belongings. She tries to burn their stuff in her sink, but the fire quickly spirals out of control causing half of her apartment to go up in smoke. 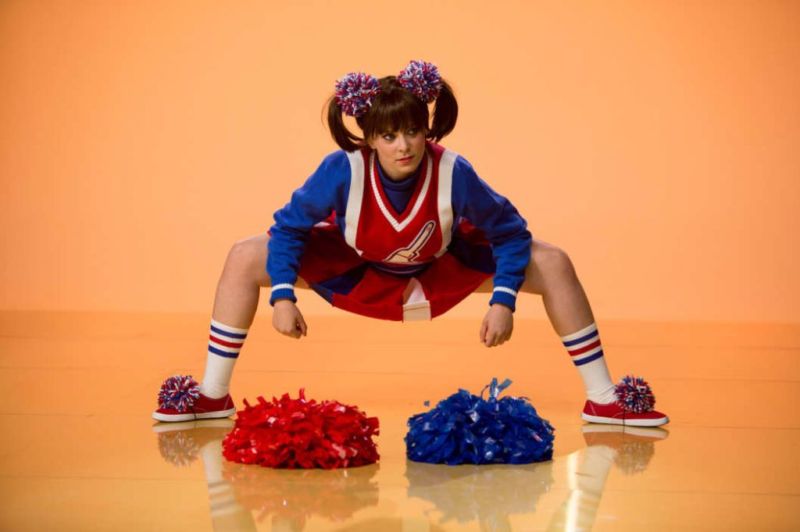 With nowhere else to go, Rebecca knocks on Heather’s door to see if she can spend the night. Heather allows Rebecca to stay and we learn that Heather still lives with her parents. Heather’s parents welcome Rebecca into their home with open arms. The next morning, Rebecca heads back to the law office where she learns that her 9/11 call about her burning down the apartment has become a viral video. That very same morning, Rebecca and the rest of the law firm meet with Miss Douche who has hired the firm to help rebrand her imagine.

Rebecca becomes inspired by the idea of rebranding and instead of representing the case passes it onto Paula while she decides it is time for a makeover. As Paula begins to work hard on this case, her husband Scott is trying to take on more responsibilities at home. Sadly, Scott isn’t doing a great job, therefore, causing Paula to make a decision about her future law school endeavors. She decides that she is going to give up on her dream of going back to school because she feels her family can barely function as it is.

Going back to Rebecca, she is planning for her makeover with the help of Heather’s parents. She wants to do the makeover because she plans to enter the Miss Douche contest. While getting her makeover, Rebecca sings a song about getting a makeover. She returns to the office with a new hairstyle and look. Paula isn’t overly impressed and kind of brushes Rebecca off since she is dealing with her decision to give up her law school dream.

While walking back to Heather’s home, Rebecca runs into Josh on the street. Josh doesn’t know who she is at first, but after removing her sunglasses, Josh says hi. Rebecca tries to sell her makeover to Josh and says that she is doing better than ever. Josh doesn’t buy into it and attempts to apologize for whatever she is going through. As expected, Rebecca ignores that Josh can see through her makeover act and pretends to be fine. She returns to Heather’s place where she sleeps on the couch for two days leading up the Miss Douche pageant. 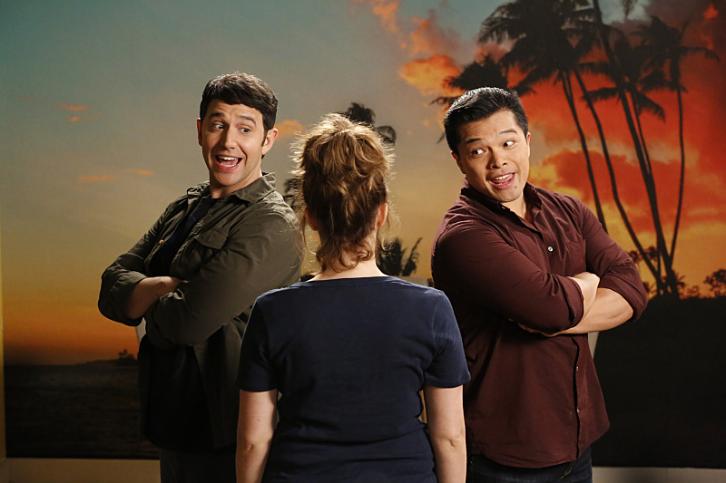 The day of the pageant, Rebecca refuses to go, but Heather pushes her to. While on-stage Rebecca is asked why she wants to become the next Miss Douche while also being questioned who she is as a person. Rebecca doesn’t know how to answer and freezes up. While all this is going on Paula is trying to handle her first court case even though she isn’t a certified lawyer. As Rebecca is being asked who she is, Paula’s is being questioned as well. Rebecca admits that she isn’t ok while Paula admits that she doesn’t have a law degree. Paula explains her situation to the court petitioner and begs him to read her report. The petitioner surprises her and says he already read it and states that he feels she would make a great lawyer.

Back at the Miss Douche pageant, Rebecca steps down as a contestant and points out that Heather should be considered instead. Heather wins the pageant and announces to her parents that she will be moving out because she has grown tired of them being so passive about her doing nothing with her life. Heather tells Rebecca that the two of them are going to move into a new place together because she needs her and Heather needs her credit.

After receiving confirmation that she has what it takes to become a great lawyer, Paula takes the day off from work to get an abortion. This is something that was briefly addressed earlier in the episode, but at that time, Paula decided to keep the child and give up her dream as discussed above. While resting, Rebecca comes over to check up on Paula to see why she took the day off. Rebecca asks Paula what is going on. Paula doesn’t tell Rebecca that she had an abortion nor has she ever told Rebecca that she was pregnant in the first place. Paula brushes off the whole conversation by saying that she just had personal issues to deal with at home and Rebecca seems to accept that as the answer.

Rebecca returns to her old apartment where she tries to talk to Greg in spirit. She tells Greg that she wants to move on from him and say goodbye. She admits that she needs to let go of the past and the only way to do so is by letting go of him. Rebecca leaves her old apartment and meets up with Heather at the local boba tea spot where they begin to look for their new place to live. They see Valencia at the counter shoving a donut in her mouth which prompts Rebecca to go over and say hello. This is how the episode ends, therefore, making next week’s episode all about the return of Valencia into the show.

After viewing this episode, I must admit that this is hands down the best episode of the series so far. While the show has proven itself to be consistently funny and witty, this episode, in particular, was incredibly funny, had incredible musical numbers, and even managed to showcase several of the show’s characters owning up to their fears and making tough decisions. Everyone involved with this episode should be giving themselves a pat on the back because this is the episode to beat moving forward. It was such a well structured and thought out episode. I loved every single moment of it.

There were a total of three musical numbers in this episode and while I feel like I say this about every other episode, the song “We Tapped That Ass” is now my favorite song of the series. I think it honestly tops the “I Gave You a UTI” song. “Tap that Ass” is so hilarious and filled with sexual humor as well as a classic tap dancing interlude. I just couldn’t help but crack up laughing while falling in love with the amount of talent behind every aspect of this song. It’s brilliant and I hope the Emmys have enough guts to nominate this song next year.

While I could keep praising so many things about this episode including it addresses a married woman with two kids having an abortion so that she can go back to school, I have to bring up the elephant in the room. It is incredibly sad to learn that Santino Fontana‘s Greg will no longer be part of the series. When I reviewed last week’s episode, I had a fear that Fontana would be leaving the show but was hoping that he would be shown in Atlanta from time to time. It has been reported that this isn’t the case. Greg has been confirmed to no longer be part of the series which honestly leaves a pretty big hole to fill for Bloom, McKenna, and the rest of the writers. I know I should have faith in a show that I love so much, but it’s so incredibly rare that once one of the main characters leaves a show that the vibe of the show remains the same. I love the direction that this season is going but losing Greg definitely stings a bit.

In closing, I will leave you with this video which is nothing short of wonderful. Goodbye Greg, I hope you come back some day.