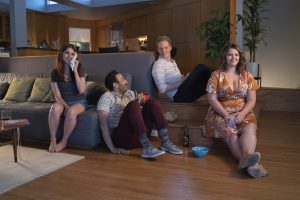 You’re The Worst has come a long way in five years. Jimmy (Chris Geere) and Gretchen (Aya Cash) are planning their wedding, but it took several years of on again/off again, will they/won’t they including some harsh breakups. Edgar (Desmin Borges) is having casual sex with Lindsay (Kether Donohue), who now has a thriving career.

This is the final season of You’re the Worst and the cast gave one final panel for the Television Critics Association last summer. After the panel, I spoke with Cash and Borges for a few minutes. You’re the Worst airs Wednesday nights at 10 PM on FXX.

WLE: What are your emotions right now?

Desmin Borges: Hopeful with a large level of excitement while I’m just trying to keep any thought or emotion of “oh sh*t, we’re not going to be doing this in two months from now” at bay underneath. 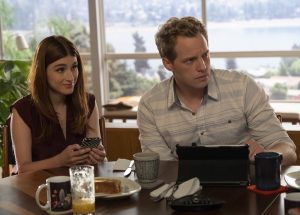 Aya Cash: Deep denial. I am in deep, deep denial. All I want is another this, so I don’t know how to move forward exactly.

WLE: Where did Jimmy and Gretchen drive off to at the end of last season?

Aya Cash: I don’t think we ever find out. I think we just go home.

WLE: Could there be a happy ending for these characters? 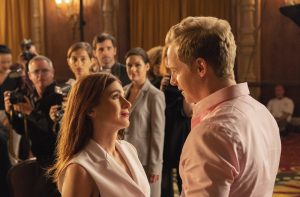 Aya Cash: We haven’t read the last block but we know what’s going to happen. I think it’s going to be satisfying. I think happy, sometimes we have this sense that you’re supposed to be happy, but the truth is satisfaction is also just as good. I think we’re going to be satisfied, even if it’s not pure happiness.

Desmin Borges: The level of growth that Edgar’s had so far and where I think he’s going to end up, he’s going to find himself in a place with the most confidence and independence he’s had since we started. That’s a huge win for him. 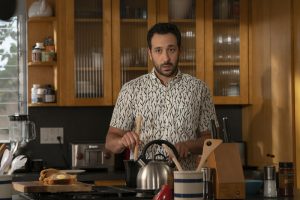 WLE: Have they found ways to top season four?

Desmin Borges: Oh yeah, we pulled out some new positions for season five so there’s some funny sh*t going on in the bedroom.

WLE: Is that like doing a stunt or an action scene?

Desmin Borges: It’s probably harder than doing anything else because you have people that are watching you while you’re basically naked. Like, I’m just wearing a cock sock and she has some padding on. It’s like doing the most intimate and awkward dance ever. You’ve just got to keep it light, keep it fun. We’re pretty good about only doing a few takes and nailing it. Our camera guys are on it.

WLE: Would you do another series again?

Desmin Borges: Oh yeah. The landscape for television is evolving it seems like every day. There’s just great things being produced and new voices. Particularly women and people of color are starting to showrun more shows and giving an opportunity for a wider range of stories to be told. I’m really looking forward to the next time I’m able to be part of a family that’s similar to this, telling hopefully a similarly great story. 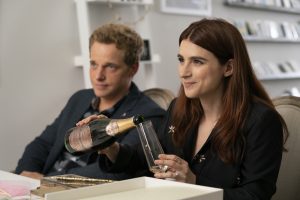 Aya Cash: Oh, in a heartbeat. I don’t have any specific plan. I just want to go where good work is with good people. If that’s on the pretapes of P90X, I’ll do that. Whatever TV means these days, I’m up for it.

WLE: Have you started looking?

Aya Cash: I haven’t found the right thing yet but I’m hoping there’ll be something this year. If not, that I can keep my worker bee under control and wait for something good.

Desmin Borges: Yeah, there’s been some stuff along but I don’t know. One of the greatest things about me being based and living in New York City is that I have the theater world, the film world there as well. I haven’t been on stage in a while so if everything goes to plan, I think my next project will be on the New York Stage. Then we’ll see where we go from there.