The Clover-verse Grows Even Larger in ‘10 Cloverfield Lane’

Taking major leaps and bounds away from the nauseating found-footage gimmick of 2008’s Cloverfield, 10 Cloverfield Lane is an unexpected spiritual successor with a fresh canvas of terror and claustrophobia. All the J.J. Abrams produced feature loosely shares with the 2008 monster film is simply a title and an equally mysterious viral campaign.

From the film’s tense opening sequence of 10 Cloverfield Lane, there are vast winds of change from the 2008 film. In a traditional third person standpoint, we see Michelle (Mary Elizabeth Winstead), a young woman from Lousiana in a hurry to leave her apartment, engagement ring and her unseen fiance, Ben. She flees in her car down a rural road. To where, we don’t exactly know. But she fails to reach her destination after an unforseen car accident. She wakes up, chained to the wall in a concrete underground bunker.

Michelle’s captor, Howard (John Goodman) divulges information about an unknown attack and blackout, which is the reason why he brought her there in the first place. She’s skeptical of Howard’s story, demanding access to her phone or other means of communication. He insists that everyone that she’s come to care for on the surface is dead. She doubts his claims, but information from a second captor (John Gallagher Jr.) seals the deal.

First-time feature director, Dan Trachtenberg is a godsend for 10 Cloverfield Lane, capturing the nail-biting elements of claustrophobia and paranoia with such fine precision. He takes over in the director’s chair for Matt Reeves, who’s a solid director in his own right with Let Me In and Dawn of the Planet of the Apes. Still, Reeves was given less superb material to work scrounge around with in Cloverfield. With Trachtenberg at the helm, J.J. Abrams once again producing and Whiplash’s Damien Chezelle as one of the co-writers, 10 Cloverfield Lane is in some of the best hands imaginable.

Locking the film down to primarily one location might drag the film along to a screeching halt, but that is impressively never the case. The majority of 10 Cloverfield Lane is confined to the underground bunker where every scene grips the page. Props go out to the art direction team for allowing the bunker to be character all to its own. A safe haven. An asylum. Whichever interpretation you prefer alongside its crazed owner, there’s something to be said about the pivotal role it plays.

An off-hinged Goodman is the ideal foil for the ever-resourceful Winstead, who always tries to be one step ahead of the game and closer to escape. You never know when or how Goodman’s Howard is going to turn on a dime. During one scene, the trio are playing a game and he transforms a concept so innocent into something twisted and deranged and back again. Throughout the film, one has to gauge whether or not Howard is an intimidating monster or a survivor that’s willing to do what’s necessary. Goodman is the scene-stealer here, proving his versatility can stretch from Roseanne to here. The film’s tagline is “monsters come in many forms.” They weren’t kidding either.

While Howard attempts to fashion Michelle as a more vulnerbable captive, she’s devising her own plan making use of what she has available. The edgy screenplay, co-written by Chezelle, Josh Campbell and Matt Stuecken, subtly drops clues throughout the film of how to overcome her dire situation. Smartly crafted, the dialogue between Goodman and Winstead and even Gallagher Jr. at times is the linchpin in ensuring 10 Cloverfield Lane ticks.

Though when the final act veers in a completely different direction, albeit staying firm to core character’s traits, there is a greater dependency on transforming the film from an interpersonal battle of wills to a budgeted spectacle. At least the sound design is allowed to shine even greater during the climax, leaving a substantial amount of thrills to very end.

To be perfect honest, it wasn’t mandatory for 10 Cloverfield Lane to take on the mantle of the Cloverfield brand, which it bears little resemblance to the first film except in name only. Even as its own cinemtic property, this spiritual successor has more than enough electrifying resonance to act on its own. 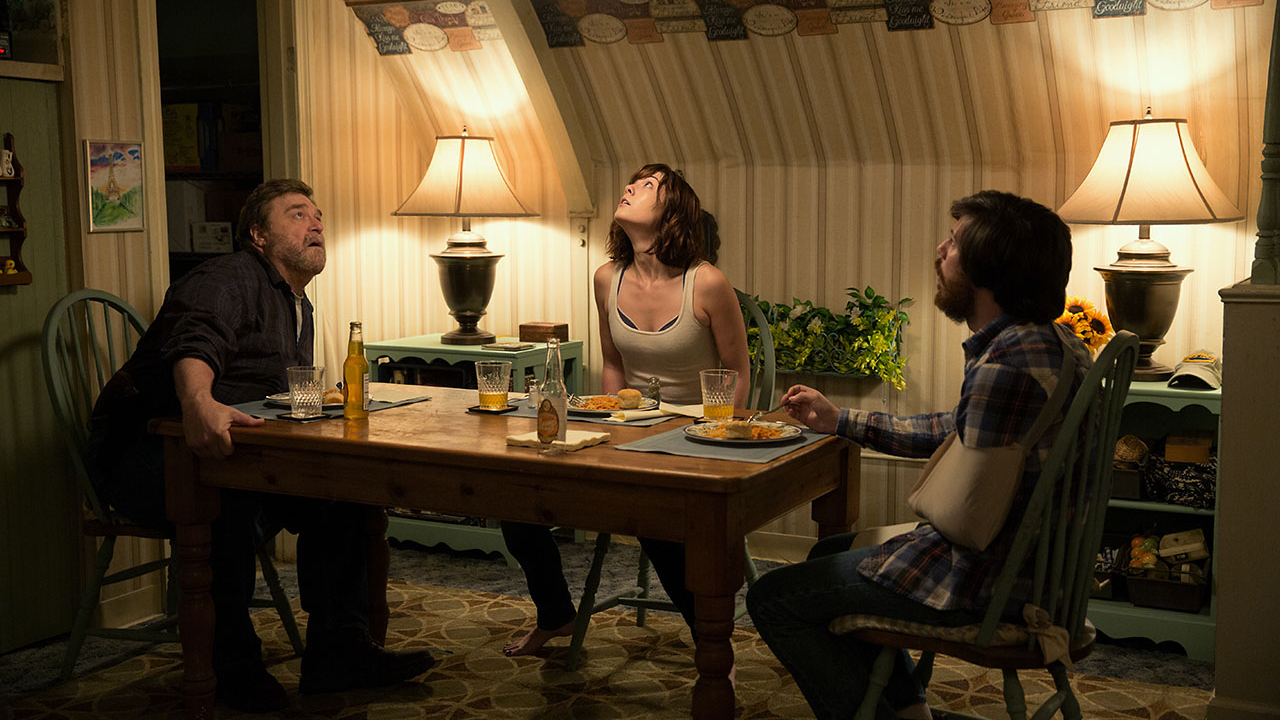 A gritty, claustrophobic film, 10 Cloverfield Lane is fairly solid with its 1080p Blu-ray transfer. As stated in the review above, much of the film occurs in Howard’s underground bunker, which never feels overpowered in its color palette. Despite some night scenes depicting an excessive amount of noise, the overall scheme of this transfer remains a positive one. Characters are highly detailed from their clothes, skin and hair. Overall, it’s a fairly effect release for Paramount Home Entertainment.

Paramount is going light on the supplements for 10 Cloverfield Lane. Between the audio commentary and the seven featurettes, there’s very little to consume after watching the film. The longest of the bunch running about 9 minutes is Cloverfield Too, which the cast and crew discuss the plot and other elements of the film. Fans of the film’s score will enjoy Fine Tuned, a 6 minute featurette about how the music affects the overall film. There’s so much we want to know about 10 Cloverfield Lane, but like the film itself we’re not getting nearly the pieces to the puzzle.

Blu-ray Review: “10 Cloverfield Lane” Brings Out the Monster Within