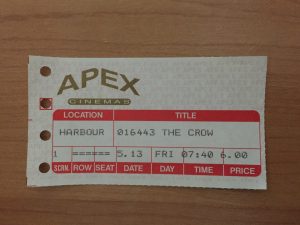 25 years ago I finally got to see Brandon Lee’s final film. He’d died 26 years ago filming The Crow and for a while it was unsure whether the film could or would be finished. I had only just discovered Lee in Showdown in Little Tokyo and Rapid Fire and was looking forward to following his long career. His death on the set of The Crow was difficult to reconcile. How could someone so young be gone so suddenly? How could someone be fatally shot making a movie? How could a film set be so negligent? My loss was nothing compared to the Lee family and his fiancé, Eliza Hutton, but it was still a mourning I wasn’t expecting to process so soon. 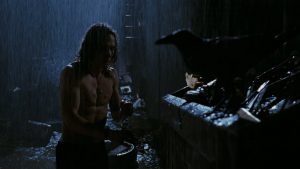 The nature of the film became inextricably linked to the real life death. One year after his real death, we watched Brandon Lee climb out of a grave, brought back by a crow. It made the movie feel like one last chance to say goodbye.

Now it’s been 25 years and the story of Lee’s death is cemented in Hollywood canon. It’s no longer surreal to watch him resurrected. I’ve lived more than half my life missing Brandon Lee and I suppose I‘ve processed the end of the story. I still remember the chills I got all four times I watched it in 1994. 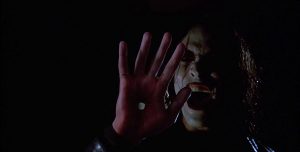 There may have been a world in which The Crow never got finished. Had that happened a lot of people might not have connected as much to the loss. Not everyone appreciates the depth of action vehicles like I did Showdown and Rapid Fire, but The Crow showed everybody the ferocity Lee brought to the performance: his glee at discovering his powers, his determination confronting each villain and his sensitivity to the tragedy, his own and the others his story touches. Look at his face when he tells Albrecht (Ernie Hudson) he’s just going to use the front door. And look at his frustration going through the motions of his healing powers with Funboy (Michael Massee, who never really got over pulling the trigger on the prop gun which was totally not his fault, but how does one cope with that?) 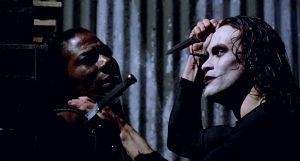 When I was 16 I probably still believed in revenge. At 41, The Crow illustrates some of the issues with any revenge narrative and takes them to the next level. Sure, it’s a fantasy that the murdered could return to avenge their own death, but how does that help the living? None of us are going to get to return so it’s just a story. Compounding that, the murders of Eric (Lee) and Shelly (Sofia Shinas) involve the criminals raping Shelly. Killing them doesn’t erase the scars an attack like rape leaves. Given this mythology says the afterlife exists, those scars could be with Shelly for eternity. 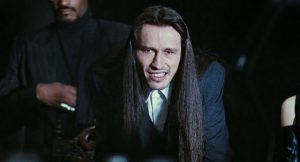 There is the fact that these scum are going to hurt more people so they need to be stopped. Perhaps the only one who can stop them is an immortal avenger. The crow powers allow Eric to transfer all the pain they experienced to Top Dollar (Michael Wincott). That’s something only magic can do. In real life most people who do such harm lack the empathy that could ever allow them to feel the harm they’ve caused. 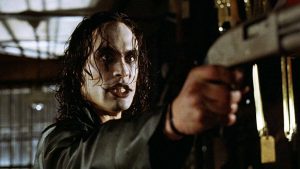 Eric and Shelly were fighting evictions by their slumlords. I suppose it’s a plot device to organize the villains in a hierarchy but it also seems relevant. The Crow is a heightened comic book world but who’s to say real shady landlords won’t try to scare renters into leaving with violence? And today we see people being killed fighting righteous causes. People died protesting Nazis in Charlottesville. Violent crime can happen to anybody randomly too and The Crow would be just as relevant avenging that. I guess the point of The Crow is you never know when, how or why violence might enter your life. The inspiration for James O’Barr’s comic was a drunk driving accident which is just as tragic. 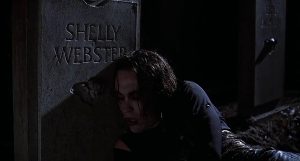 Likewise the release of the movie helped a fan like me cope with Lee’s death, but was that a hollow sentiment? Again, after The Crow, Lee is still gone. There have been no new Brandon Lee films in the last 25 years. (Sex, Lies and Video Violence, for which he filmed a cameo, was completed in 2000). This movie is the reason his life and career, more specifically the negligence of the propmaster and firearms supervisors. In the end, Eric returns to Shelly but Brandon didn’t get to return to Eliza. She still had to cope with this senseless loss. It was nice to see her post a few years ago that she’d married, although I can’t find her post anymore to link to it. 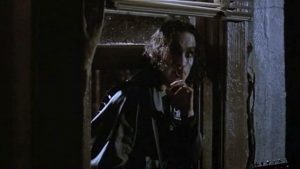 Man, that dialogue is catchy though. I love the wordplay of action tropes when officer Albrecht says, “Move and you’re dead” and Eric reverses it as “I’m dead and I move.” But I also love the portrayal of love, when Shelly says I love you and he likes it so much he asks her to say it again. It doesn’t feel like “men avoid saying it back” to me. He’s clearly a guy who says it too. My favorite line was always “It’s not a good day to be a bad guy,” but of course the theme “It can’t rain all the time” is more universal and hopeful. 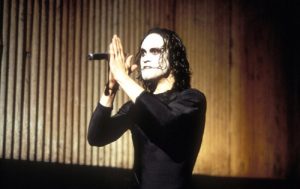 No doubt The Crow would have been a good movie had it been completed tragedy free. There’s just no way to view it independently now. As such, it is the only exception to my Franchise Fred rule. When the first film causes the death of its star then they really shouldn’t capitalize on its success. That didn’t stop them though. There were three sequels and a TV series, although attempts to remake it have been mired for the last five years. That’s for the best. The Crow was Brandon Lee and it only exists as a monument to him.