When I saw Unbreakable in 2000, all I wanted to see was Unbreakable 2. I should have told young Franchise Fred to be patient. It would take 19 years for Glass, including making an entirely separate movie for M. Night Shyamalan to complete his Unbreakable trilogy and that’s true to the format. You may begin with ideas for a trilogy, but the reality makes an immediate sequel unfeasible. Life and experience and other stories are what make sequels possible, like Rocky and Creed, another Philadelphia saga. See what I did there?

Glass offers the Unbreakable 2 and Split 2 that either fan would want. David Dunn (Bruce Willis) and his son Joseph (Spencer Treat Clark) are organized in their crime fighting now. Kevin (James McAvoy) and his alters are still kidnapping young girls to put through trials for The Beast. McAvoy still does a string of all his alters in a row in several scenes.

Even with both characters revealed, at first it’s still the Shyamalan way of suggesting the extraordinary without fully revealing it. That is exactly how I wanted to see Unbreakable continue. It doesn’t suddenly become a Marvel movie. I just love the scenes where David uses his power, trying to do a little good in the world.

But even when Shyamalan lets his superheroes lose, there’s no more tease but it’s still elegant. I would love a Marvel movie to film their battles the way Shyamalan does. He can show extraordinary feats while obscuring some aspect of it to activate the viewer’s own imagination. He still chooses the point of view. It can be from bystanders’ or prisoners’ obscured point of view, or it can be a security camera if that’s the most effective. It’s not just a full frontal splash page, although even comic books didn’t always draw everything in the foreground. Cinema and graphic novels have that in common. 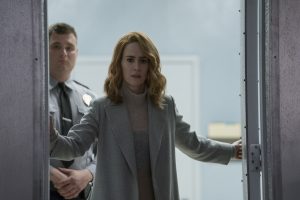 This is not just Unbreakable 2 and Split 2, of course. This is Glass so the Dunn and Beast stories converge when Dr. Ellie Staple (Sarah Paulson) places Dunn and Kevin in her own real world Arkham Asylum. She has three days to treat them and convince them there’s a rational explanation for their powers. Even if she’s right, three days isn’t enough time for good psychology, but this is a movie timetable we’re dealing with. Years of therapy aren’t narratively compelling. 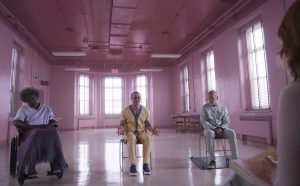 Shyamalan’s ultimate twist could be that Dr. Staple would debunk the very mythology of his trilogy. Of course this movie needs an antagonist, but I think she’s relevant outside the Unbreakable mythology too. it’s true of every story in life. If the Unbreakable mythology is real, it would never be without a skeptic and a nonbeliever standing in the way of the extraordinary. The hero doesn’t overcome one and then get celebrated forever after. It’s a constant battle to prove what you’ve already proven all over again, and Glass speaks to that. 19 years after we met David Dunn it’s still his battle. 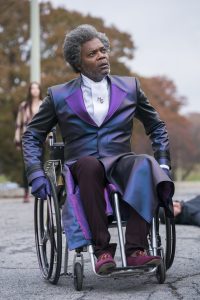 Mr. Glass (Samuel L. Jackson) is teased throughout the movie like the shark from Jaws. This fragile wheelchair bound man is still the deadliest villain in a movie with a jacked up Beast who can climb the ceiling.

Other characters from Unbreakable and Split are important to Glass too (and some aren’t important but they’re still fun!). It’s great to explore a grown up Joseph dealing with his father. Casey (Anya Taylor-Joy) is a saint just for even being part of this story again. She survived. She of all people gets to peace out of future adventures, let alone have the capacity for compassion. 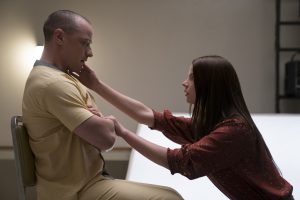 Glass even rewards aspects of the Unbreakable mythology that weren’t originally in the film. If you watched all the extras on the Unbreakable DVD, you’ll recognize things in Glass. All of it was truly part of the saga.  Since some of them took 19 years to pay off, he was truly playing the long game.