This week, the jury of the Cannes Film Festival debated the controversy about requiring theatrical exhibition for future Cannes entries. Last month, big guns like Steven Spielberg himself visited the fancy new Universal Citiwalk movie theater to tout going to see movies in cinemas. Last year, declarations of the death of Cinema were refuted at Telluride. The movies aren’t dying, but movie theaters are.

Movie theaters used to be my favorite place to go. Now I dread going and If it weren’t my job I would see very little in a theater. It shouldn’t be this way. I should be willing to give any movie a chance and enjoy the experience. So I write this Freditorial as a plea to movie theaters to become destinations again.

Here are a few things they could do. 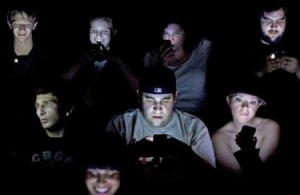 I’m glad they’ve backed off the idea of encouraging texting in theaters, but this changes little as theaters already do nothing to stop it. I would like to say we’re all grown up enough to behave ourselves in public but here we are. People pay money to not watch what they’re paying for, and they disturb others.

Movie theaters are going to have to create a position of Theater Monitors to watch over screenings. It’s an added cost of employees but this is what needs to happen for avid moviegoers to embrace the cinemas again. You can use the money you’re no longer have to pay skilled projectionists since digital projectors run themselves.

These monitors will, politely, caution people who are starting to disrupt the audience. Repeated offenses are cause for ejection, no refunds. I’m afraid a monitor for every theater is required. Just having someone pop in for a few minutes will only cause disrupters to wait until they leave. Perhaps this will only be a temporary necessity and after a few years people won’t need to be babysat in public anymore. For now, we have bouncers in bars, and it seems we need them in movie theaters too. 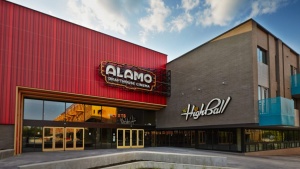 Alamo Drafthouse has it down. They have a system to notify a manager without leaving your seat (using the same order cards for your meal and drinks), and no one will know you’re the one who reported them. This policy basically renders itself obsolete because the customers know this is a movie theater that doesn’t tolerate disturbances, so people who go there don’t even try (except for that rare hilarious voicemail from a texter who didn’t know.)

We do not want audiences to police themselves. That is dangerous and will start fights. Make it the movie theaters’ responsibility. We are paying them and they have insurance. You have to protect your guests from disrupters because if someone is already inconsiderate in public, they may very well have more dangerous tendencies too. Texting and talking could be an indicator of sociopathic behavior, and we’ve seen people get violent simply for being asked to follow the rules. Plus, free for all shouting at offenders creates more disturbances that will bother others.

Not to overreact. Little nuisances can be ignored and the tolerance of that is personal judgment but we need to address the big cultural pictures. If movie theaters would ensure a peaceful experience, the below would be forgive able. But let’s aim higher and fix everything.

This is not against the communal experience either. The joy of movie theaters should be laughing or gasping with 300 other strangers. It’s just 50 or so of those strangers now are selfish and we have to adapt. Otherwise they ruin it for everyone.

2. Be A Place To Watch Movies, And ONLY Movies. 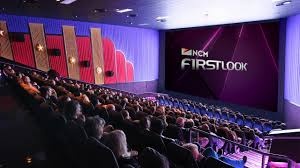 I don’t go to many movies in regular theaters anymore because my job requires early screenings. But last time I went out with a friend, he complained about the 25 minute loop of ads before the movie and another 25 of trailers and more sponsored ads when the lights dim. I don’t think about that much because I rarely have the consumer experience, but he’s right.

If this was what I had to sit through every time I watched a movie, I’d vacate theaters too. Audiences may tolerate commercials on television because they know they didn’t pay to watch the show. They no longer have to watch all the commercials either thanks to streaming and DVR (I was skipping commercials back on VHS). This is a venue people are paying to enter. You can only push them so far before they migrate to better options. On Netflix, the movie starts as soon as you push play.

We already know movie theaters make the bulk of their money on food. Most of ticket sales go to the studios, which is what keeps funding these enormous blockbuster budgets. If concessions sales aren’t enough to keep theaters in business, that they have to sell 25 minutes worth of ads, that’s a huge problem with the business model. If Hollywood is serious about making theaters lucrative again, they need to fix this.

Does that mean subsidizing theaters? At least cutting their rental fee to screen movies? Digital costs them nothing compared to producing film prints but the fees to theaters have not been reduced. Perhaps a more equitable share of ticket sales, which might in turn mean Hollywood has to lower the budgets of their movies if they’re sharing more of the revenues. 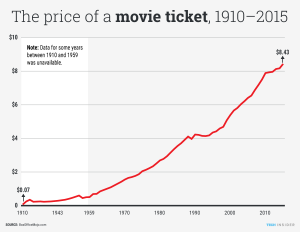 Reports that average ticket prices are under $10 are bogus. There’d have to be theaters charging $1 to balance out those charging $20. You’re not counting dollar theaters in average ticket prices. We’re talking first run movies, when it counts, opening weekends. And then, what theaters are charging negative dollars to counteract the premium houses that charge well over $20?

Hollywood loves their big opening weekends but there’s a limit to how much more a movie can make. How much higher do you go after $200 million in four days? Eventually you price your entire audience out.

I’d like to think that if you cut prices in half you could triple attendance. I have no way to test that, but certainly if the premiere theater’s are not even offering a premium experience, you’ve got to think about supply and demand.

When I worked at a movie theater in the ’90s the owner said he only needed to have 30 customers per block of shows to break even. They had nine screens. Now that’s anecdotal and I know there’s inflation and the economy has changed but the cost of tickets has far surpassed the value of the theater experience.

Roger Ebert used to complain that theaters were dimming projector bulbs to make them last longer and save on replacement costs. That’s irrelevant now as film projectors have been replaced by digital. The DCPs should come with standard presets so that every showing of a single movie is up to the same specs. I still notice dim pictures, films that look much better on blu Ray. Worse is the sound.

For all the theaters offering premium tickets for extra features, the sound is still muffled. What’s the point of having speakers all over the walls and ceilings if all the sound still comes from one muted speaker behind the screen? Even upper tier theaters like Arclight have grown run down and standardized, although at least they don’t do the commercial pre-show. 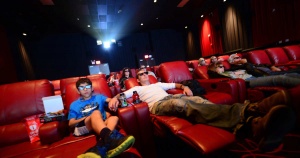 Stadium seating is standard now. Recliners are becoming the norm. I don’t think average moviegoers are that drawn to posh experiences. They just don’t want to pay to be subjected to a worse experience.

35mm ain’t coming back. What movie theaters forgot is with film they had something most people can’t watch at home. Digital may be higher res and bigger than most homes but it’s still similar to our blu Rays and DVDs. Those horrible Fathom events invite people to see classics on the big screen, but their satellite feed looks worse than a DVD. If you were showing a film print, that would be something historic you could advertise to the classic film buff.

The Afterlife of Cinema

Movies will continue as an art form. People will be happy to watch movies at home or on tablets. Filmmakers hate this but they need to get used to it. Our eyes have been trained for small screens. A big screen itself is not enough of a draw. You have to sell them on the experience of going out, and movie theaters will have to prove themselves superior. 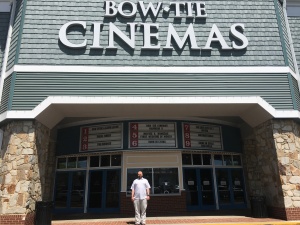 I want cinemas to step up and become a place I want to visit again. Alamo Drafthouse is the ideal but it’s not reproducible on a mass scale. If it got so big it had thousands of locations, they couldn’t keep the personalized atmosphere.

Most of all, the movies still have to be good. That will always be the case, but now there are good movies all over the place. While home viewing has improved and personal devices have adapted, movie theaters cannot afford to regress. If filmmakers are serious about having their movies seen on the big screen, they should get involved with exhibitors, and get their studios involved too, and work on making movie theaters places they’d be proud to show their films.

Freditorial: How Movie Theaters Can Save Cinema