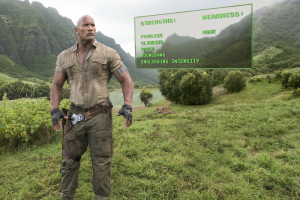 Franchise Fred was worried that the Jumanji: Welcome to the Jungle was missing the point of the original by turning the board game into a video game. Games evolve in 20 years and so does Jumanji so Jumanji: Welcome to the Jungle is a natural evolution of the game. I mean, we already have two movies about a board game (never forget Zathura.) It’s time for Jumanji to take over console gaming too.

Spencer (Alex Wolff), Fridge (Ser’Darius Blain), Bethany (Madison Iseman) and Martha (Morgan Turner) get detention and find an old Atari-style console with the game Jumanji. Weird that Sony wouldn’t make it a Playstation game, but anyway it sucks them into the jungle where they become their avatars. Spencer is Dwayne Johnson, Fridge is Kevin Hart, Bethany is Jack Black and Martha is Karen Gillan. 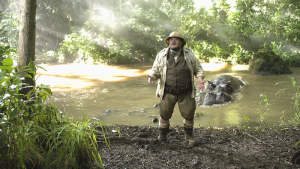 It is kind of a bummer that the group begins as two boys and two girls and ends up three men and a woman, but they almost earn the disparity for having Black play Bethany. It turns out a teenage girl is the role Jack Black was born to play.

Jumanji: Welcome to the Jungle had Franchise Fred at the organic callbacks to the original Jumanji. This is decidedly a sequel, only a generation later. I could call out that because Robin Williams and Kirsten Dunst won their game, it reset the timeline to before they ever played. But I could also infer that the game still remembers them, even if the real world reset. Plus, it’s worth it to see how they developed the mythology. 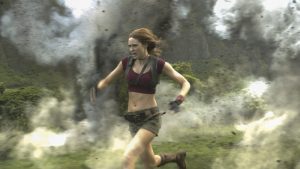 Somehow in 20 years, the CGI of Welcome to the Jungle feels more disconnected than the primitive 1995 CGI of the original. Perhaps that’s a matter of CGI becoming so pervasive, I just don’t feel excited by actors wrestling imaginary animals. Perhaps it’s that if they’re supposedly in a jungle, I’d like to see actual jungle stunts. But probably it’s just that the 1995 Jumanji brought fantasy elements into the real world, so the real world was the baseline. Now all the CGI looks like you’re really watching a video game, but that’s how all movies look now. 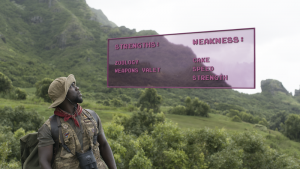 It is really good for kids to see the characters empower each other, both in the game world and in real life. Through their avatars they teach each other real world skills, and celebrate the sometimes absurd skills their characters possess.

Jumanji: Welcome to the Jungle feels like the kind of family friendly adventure I loved as a kid, and would love to take my future children to. Hopefully if the kids like it, their parents can show them the original and say, “This is how we used to play games in the olden days.” I just hope this one gets a sequel where Martha gives birth to a superhero. She definitely has a future as a superhero’s mother.