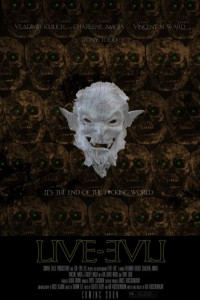 Gather around horror fiends and let me tell you a tale. A college town police station contains a supernatural force within a holding cell. This force taps into people’s fears and exploits them, making them do evil things. It is up to Deputy Hancock, Sheriff Pete, and a few other townsfolk to figure out how to stop this evil. Along the way, the group crosses paths with an inept college dean, the FBI, and a priest. They fight an ever-growing force of undead who have risen from their graves for a mysterious purpose.

The beginning of Live-Evil feels like it going to be a horror comedy along the lines of Zombieland but just when you think you have the film figured out, it takes a more serious supernatural spin. It is not long before it moves into the territory of Night of the Living Dead and soon the viewer realizes they are on a horror movie roller coaster ride that has its own identity. 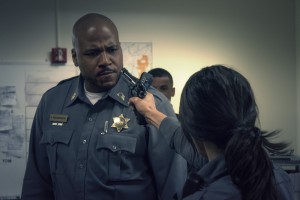 Director and writer Ari Kirschenbaum created a strong female character in the form of Deputy Hancock, who is more quick to figure things out  than your standard horror movie law enforcement officer. Charlene Amoia (HOW I MET YOUR MOTHER) plays Deputy Hancock with just the right amount of attitude and strength for a leading character. The supporting cast also put in solid performances, namely Vince Ward (THE WALKING DEAD) and Tony Todd. Vince Ward has a particularly humorous scene on the roof of the police station. Tony Todd made the most out of the short screen time he had as the priest of the small town.

Humor is sprinkled throughout this film. It is usually delivered subtlely and shows up in places you might not expect. It does not reach a goofy level as many horror movies can easily do. One moment I found particularly funny takes place in the morgue and it involved the opening of a mouth.

The first part of Live-Evil has a classic horror feel due to being primarily in black and white. When the supernatural force taps into its victim’s fears, the scenes change to color. This helps give the fear scenes a surreal, dreamlike quality because of the drastic visual transition.

The cinematography of Russ De Jong stood out to me as one of the highlights to the film with the fluid tracking and wide angles. The practical makeup effects were especially creepy. The quality of the CGI effects was inconsistent. There were excellent glowing eyes, to a fair-looking fire, and to a shot of a gravestone that I think could have looked better. Live-Evil does not contain a large amount of gore, but they did a good job when blood was shown. There is some nudity but it did not feel like it was there just for shock value. It does end a bit abruptly, almost as if they may want to do a sequel. While this did not bother me, I had hoped for the ending to be a bit more tidy.

Not everything is explained to the viewer, which may turn some people away. That is not to say the film does not make sense. On the contrary, if the audience simply pays attention to what is being presented they will be able to put together what is going on.

Live-Evil is a unique, visually entertaining film that has little something for every horror fan.  With a high budget look, solid performances, and original script, Live-Evil surpasses the stale horror currently being produced by Hollywood studios. I recommend it to all fans of independent horror films.

Live-Evil (2015) Gather around horror fiends and let me tell you a tale. A college town police station contains a supernatural force within a holding cell. This force taps into people’s fears and exploits them, making them do evil th...
0
Average User Rating
0 votes
Please sign in to rate.