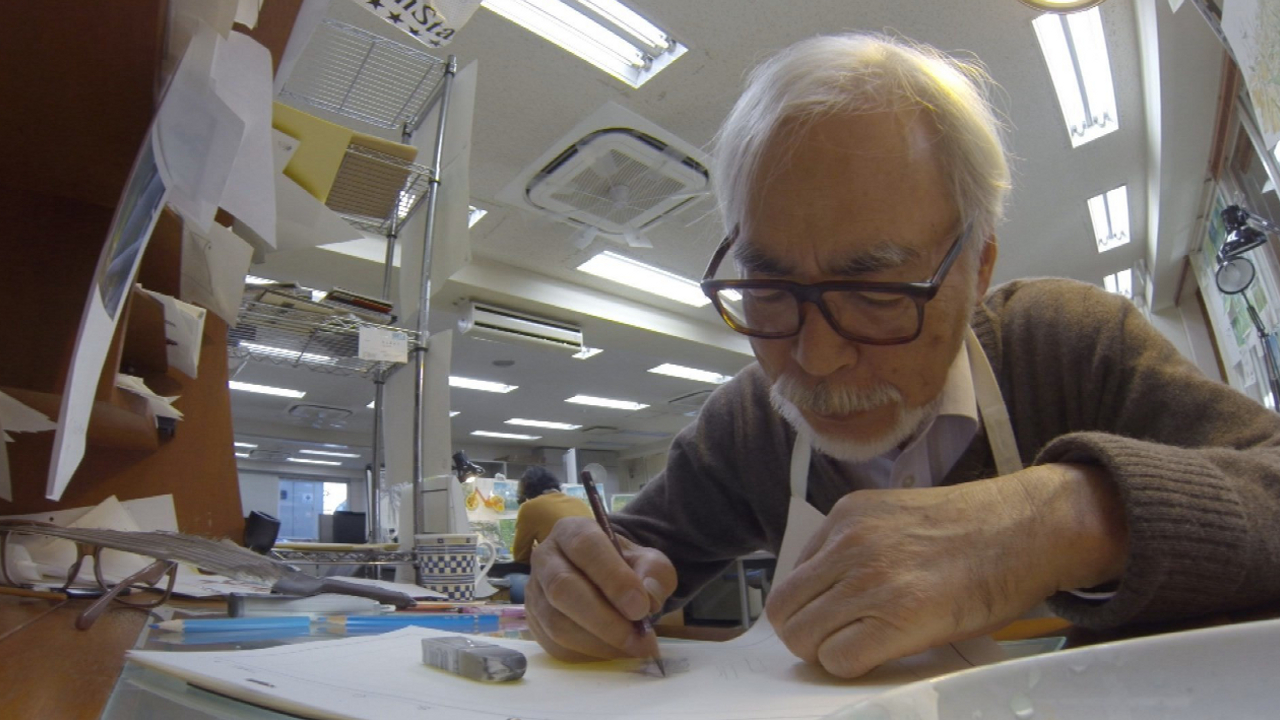 For close to 30 years, visionary auteur Hayao Miyazaki shaped the world of anime as one of the leading innovative minds behind Studio Ghibli. The man who brought us My Neighbor Totoro, Princess Mononoke and Spirited Away generated a beautiful magic like no other. In 2013, Miyazaki announced his retirement to the public – a sad day for anime fans across the globe. Feeling incomplete, the acclaimed director reconsidered his decision to some extended, truly becoming a never-ending man.

Originally released as a 2016 television documentary, Never-Ending Man: Hayao Miyazaki has found its way onto the big screen. Treated as more of a snapshot than a lifelong canvas, Never-Ending Man zooms in on Miyazaki’s life post retirement. The first few minutes of Kaku Arakawa’s documentary return viewers back to his retirement speech in 2013. It’s absolutely heartbreaking to see one of the most praised creative minds state he’s wrapping up his illustrious career. Throughout the years, Miyazaki claimed to be finished, only to seek out one more project. Despite fan skepticism over the years, the 2013 speech came across as definitive.

As the wheels inside Miyazaki’s mind turned a few years later, it was obvious that finality was nonexistent. Now in his 70’s, the Academy Award-winning director finds comfort in “trudging along” or moving forward creatively. To Miyazaki, there’s no satisfaction in retirement, simply standing around and doing nothing. Never-Ending Man depicts him demanding 110% from himself as well as from the latest generation of anime creatives. Anything less is unacceptable. Limits are pushed, but the end result is nothing short of magnificent. Anyone who’s seen his early works to 2013’s The Wind Rises knows Miyazaki doesn’t just deliver film, it’s pure art.

Arakawa breaks up Never-Ending Man into seven snippets with a majority of documentary highlighting the creative development of the auteur’s latest short, Boro the Caterpillar. For Miyazaki, Boro attempts to fuse the old school with the new school. As animation studios such as Pixar and DreamWorks evolved towards CGI becoming the norm, Miyazaki refused to budge. He remained true to his pencil and paper. Realizing not everything can be accomplished by hand, Miyazaki attempts his hand at the technology. Boro was produced utilizing contemporary CGI tools, but a disconnect lingers. That becomes more evident when Miyazaki sits in on a demonstration of AI painting images, which repulses him. His perfectionist demeanor surfaces in other meetings, zoning in on the little details that don’t feel natural. Whether it be how fast a head turns or the length of hairs on a caterpillar, Miyazaki is certain to point it out.

Never-Ending Man confidently channels itself around such a remarkable legacy, albeit one cemented by being a workaholic. We’re treated to glimpses of how he views his own legacy – precision, uncertainty, even dominance at times. It’s almost fitting that as he talked about devouring young talent, Arkawa cuts to No-Face devouring the bath house patrons in Spirited Away. Small moments like that help shape and reflect the legacy of the man we see over the course of a year. This is a documentary designed for the fans, curious what has occurred in Miyazaki’s personal and professional life. The more aware one is with Miyazaki’s contributions to anime, the less need there is to tackle the entire scope of his career. Perhaps that is a documentary for a different time. But for now, it’s intriguing to sneak inside his psyche at this exact point in his career.

Arkawa illustrates moments where we understand why another full-length production seems like an unrealistic endeavor. Since the 2016 television release, Miyazaki has been working on an adaptation of Yoshino Genzaburo’s book, How Do You Live? Both Boro and then-untitled, How Do You Live? never reach completion within the film. Still, the grueling creative process is a more critical driving force than seeing resolution.

Never-Ending Man is a timely and profound revelation into one of anime’s greatest minds. Just to see Miyazaki in the heat of creative action beyond his alleged retirement is a wonder to itself