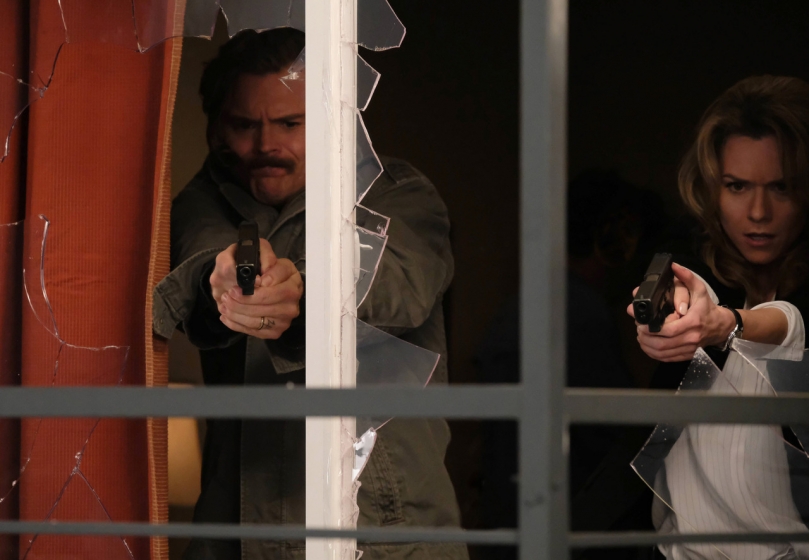 “Always air on the side of saying yes”.

Warning: This episode review of Lethal Weapon will contain spoilers.

The first season of Lethal Weapon is coming to a close, but before the season finale (I’m still so happy it’s getting a second season!), we got an episode that contains everything great this show has to offer. “A Problem Like Maria” proves that when Riggs and Murtaugh team up with DEA Agent Palmer, things are gonna get hot.

My Riggs/Palmer ship was sailing just fine throughout the episode until it skimmed towards an iceberg by the end of it. For the first portion of the episode, it appears Palmer goes missing after a nice morning goodbye between her and Riggs. Riggs’ feelings for her have increased rapidly as he bends a few rules to try to find her. He even got temporally suspended by his father-in-law Ronnie Delgado after he slugged DEA agent Chappel who suggested Palmer was be dead. Chappel turned out to be a mole feeding information to the cartel, so he deserved that punch either way. Palmer’s disappearance turns out to be a predictable fake out, but it was sweet to see how worried Riggs was while searching for her. It was also so cool how Murtaugh didn’t hesitate to help his partner find his lady.

Once they find that Palmer is protecting Maria, a young hispanic mother protecting her baby that just so happens to be the son of carter member Tito Flores, sparks continue to fly between Riggs and Palmer. The episode also became so much more fun. The motel scene was such a great scene. I became so giddy watching Palmer and Riggs standing side-by-side, shoot it out with cartel enforcer Gideon Lyon and his men, smiling at each other as they reloaded their pistols. They even grinned at each other before running out the back widow just before Gideon fired a rocket into the room. Once the two went to Riggs’ trailer to load up on weapons, we see the two lovebirds continue to have dynamite chemistry, talking about guns, optics, and the lack of dishes Riggs has. The scene reminds me so much of how Riggs and Lorna Cole used to interact in the films. Palmer is basically the new version of the Rene Russo character. She gets so much better with every appearance. I love Hilarie Burton as this character. She brings the best out of Riggs. He seemed so happy throughout the episode knowing she was part of his life. 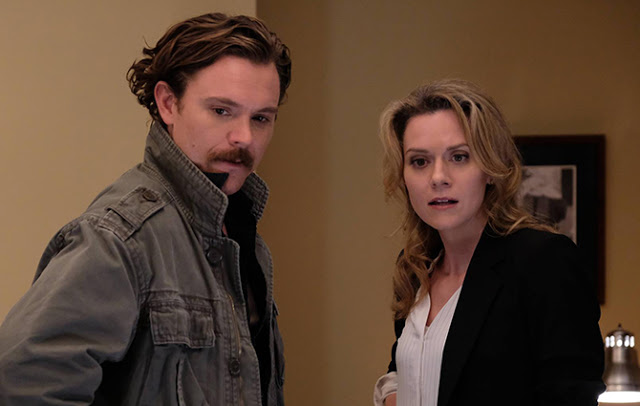 Then came the gripping revelation during the episode’s conclusion. Due to Palmer’s investigative efforts, she discovered what Riggs and us as an audience have already known. She confirmed Miranda’s death wasn’t an accident. That Gideon Lyon was assigned to kill her. Now this in no part is Palmer’s fault. She just had the good sense to show Riggs the file and give him his space. This will lead Riggs to go down a dark road and get very drastic with Gideon next week. The previews suggests some torture may be involved. I truly hope this isn’t the end for Martin Riggs and Karen Palmer. She didn’t do anything wrong. Hopefully, Riggs can get through this situation, move on, and eventually get back with Palmer in season two. There is genuine love there. They need to be with each other. I need for them to be with each other, dammit.

Murtaugh mostly played the supportive role, but he did have some good scenes with Maria (guest star Daniella Alonso). He was the one to get the exposition, I mean, information out of her. He also assured her she was doing a great job protecting her baby. He did get into it with his annoying next door neighbor, McNelle who was showing off his new limited edition mustang, rubbing it in Roger’s face. Seeing them at odds with each other is becoming a really funny recurring gag. Both Murtaugh and Riggs had equal amounts being the hero. I also always love when Roger plays with his baby. Loved the conversation between he and Trish.

Speaking of Trish, this was a big episode for her. Wow, she must have been an incredible lawyer if billionaire Azoulay fired her former firm because they passed her up for a promotion. Then he tells her to pick out any job position she wants, and lends her his private plane for a couple of days. That’s after he sent her a goodie bag at home, complete with Coachella tickets and some expensive steaks. Or as Rog refers to them as “the meat of kings”. She decides to be the man’s in-home counsel. Things are looking up for the Murtaughs. However, throughout the episode, she tries to get Roger to join her on the plane to go on a date. Because he was working the case with Palmer and Riggs, he never had the chance. This set us up for another really touching husband and wife scene between Rog and Trish with her advising him that while he may be a great cop, he should try to say yes to more opportunities to get away from his duties as a cop, and spend more time with the family. I love how understanding Trish is as a wife, but she simply wants the best for her husband. Yet again, Trish and Rog prove to be relationship goals. 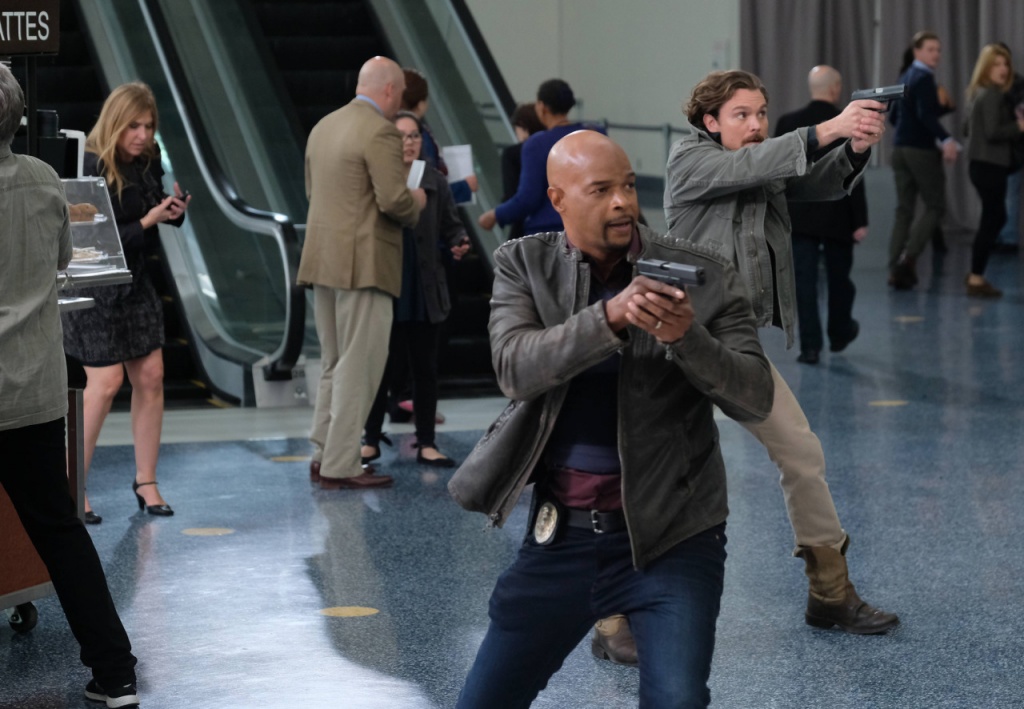 “A Problem Like Maria” gave us a really exciting case with some excellent storytelling and terrific character moments. There were two awesome shootouts here too. As I mentioned before, the motel scene had lots of bullets flying around with both Palmer and Riggs tagging a few bad guys. Then there was a pretty dope climatic gunfight at the convention center which resulted in Gideon’s capture and Maria’s life being saved. The shooting resulted in more dead bad guys. Also, the scene was mildly reminiscent of The Untouchables since it had a rolling baby stroller in the midst of the gunfire. Plenty of shell casings were visible, so the actors were shooting real guns. There was also a substantial body count with lots of CGI blood in the air. Boring, this episode was not.

This was one of the best paced hours (43 minutes without the ads) of season one. The dynamic between Riggs and Palmer is infectious. Please, we need more Karen Palmer in season two. PLLEEEEASE! Even Ronnie approves. But now as we saw Riggs happy and almost in love, it’s sad to see him decline back into his depressive state as he learns the truth behind his wife’s death. But this is what a good show does. The way Lethal Weapon makes me care about Riggs’ well being is a testament to the writing, Clayne Crawford’s acting, and the supporting characters surrounding him. I expect some more fine acting work from Crawford and Damon Wayans in next week’s season finale.

Just had a quick thought. It kind of sucks knowing Maria will have to look over her shoulder for the rest of her life. Oh, well. 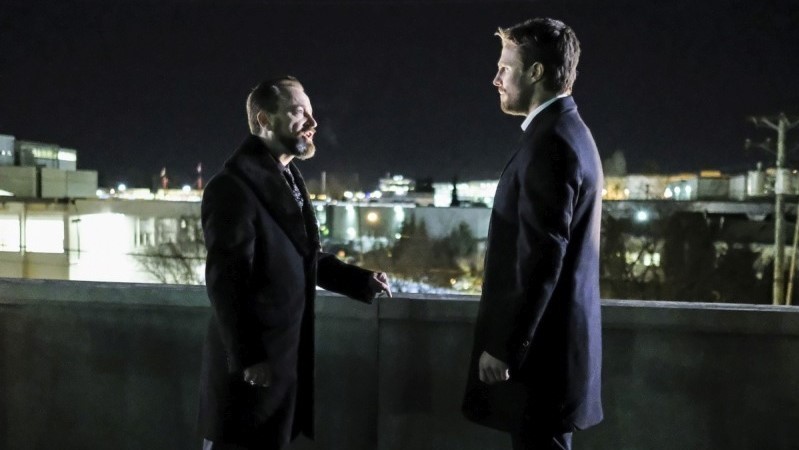 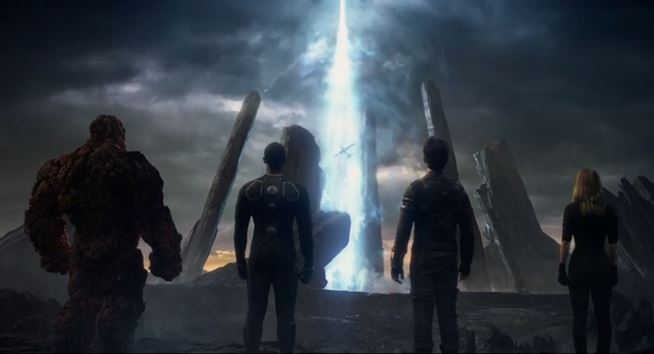