Warning: This review is packed with blazing SPOILERS.

While this fourth season of Agents of SHIELD has had plenty of excitement in its previous four episodes, “Lockup” goes into full scale action mode. Agent May is also back in action after getting infected from Lucy’s ghostly powers which resulted in her being out of commission for most of this early season. Daisy, though still wanting to work alone, has agreed to help S.H.I.E.L.D. on its current mission, with Robbie being less willing to help. It sure was great seeing Daisy back in her Quake outfit, even though she had to cool it with her powers, being that she’s not properly healed enough to use them without shattering every bone in her body.

The main mission was fun. The gang needed Robbie to do a little bit of ghost busting as they infiltrated the prison Robbie’s uncle Morrow was staying at. Lucy planned on breaking Morrow out so he could read the book because she no longer can. So it was a race against time for S.H.I.E.L.D. to get to him first. This made for an action packed, suspense filled episode with a lot of great teamwork from most of the team.

Daisy, still having a death wish, still blaming herself for Lincoln’s death, had some incredibly bad ass scenes fighting off numerous Watchdog members who were let out of their cells. It is always fun to see the talented Chloe Bennet throw some kicks, flips and punches around. From what I could tell, she did most of her own stunts. I though she would be forced to use her powers to get out of some intense situations, but she really didn’t need to as she put her ass kicking skills to good use. Unfortunately, it was stupid and unnecessary for her to separate herself from Coulson and May. It was also counter productive for them, as they had to back track to regroup with her. So although I more than appreciate seeing Daisy eradicate a bunch of bad guys, she endangered the mission and her team, as well as herself. That’s a no-no.

Just to comment on May and Coulson real quick, how great was it to see them working together and sharing some banter with each other again, huh? I love the chemistry between Clark Gregg and Ming-Na Wen. It’s one of my favorite aspects of the show. It’s also one of the few partnerships I’d be fine with if they hook up or don’t. Point is, they are a great team no matter what. Just having May back doing her thang, made this episode feel like a great payoff. I also loved that May had another heart to heart with Daisy after the mission. May knew she was telling Daisy what she already knew, but she needed to hear it. Lincoln wanted Daisy to live on. I hope that sinks into her thick but beautiful skull. By the way, Coulson used his hand shield, hehe!

Robbie had one of his most intense episodes yet. Having to work alongside Mack was cool, but seeing him slay ghosts and bad guys was hot! Pun intended, of course. It was mostly intense to see Robbie control himself from killing off a bunch of inmates who deserved punishment, including a local gang boss who ran a crew that was responsible for two kids nearly getting killed, one of them being crippled now. Is this kid Robbie’s nephew? It wasn’t really specific. Well, either way, out came the Ghost Rider, killing the boss after a heated exchange. This caused every escaped inmate to hilariously jump back in their cells. I mean, could you blame them? Gabriel Luna displayed even more evidence that he the right choice to play this character.

The action Robbie took was was awesome, but unfortunately, he was supposed to be escorting his uncle out of harm’s way. His diverted tactic allowed Lucy to get a hold of Morrow, setting up for a bigger threat. That was kind of a running context to this episode. We got to see Daisy and Robbie do some incredible actions, but at the cost of endangering the mission and people they cared about. 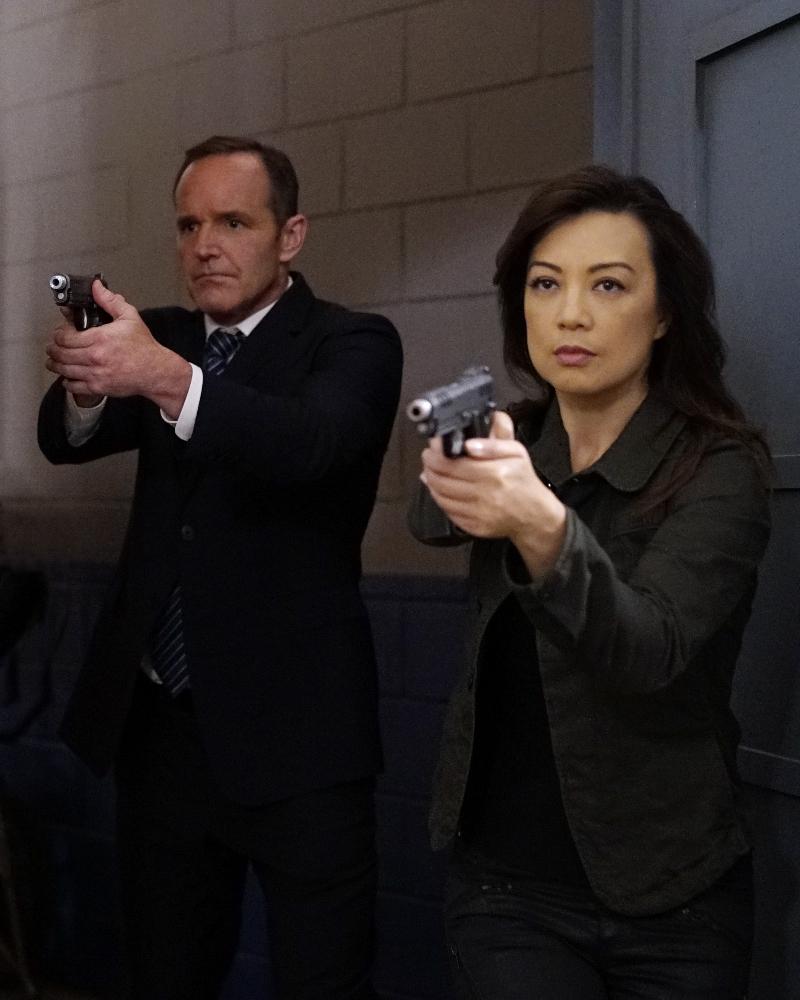 This was the first episode we got to see Simmons take part in her most important job role: answering to and assisting the director of S.H.I.E.L.D., Jeffrey Mace. Turns out Simmons was not able to BS through her lie detector test, but this allowed for an interesting subplot with Mace testing her, asking her to coach him through an intense debate with inhuman hating Senator Rota Nadeer on live TV. This gave actor Jason O’Mara a chance to utilize his charming acting chops, as he countered every angered statement Nadeer threw at him, causing him to reveal his identity as an inhuman. I didn’t expect that. I loved the result with Simmons ensuring she’d never have to take another lie detector test again by sharing with Mace that she knew he wasn’t the one behind the heroic act he was famed to be. Pretty much, Jemma has her boss by the balls in that regard. And yet, in another twist of fate, Mace’s triumphant debate win over Nadeer was cut short when she showed him security photos of S.H.I.E.L.D. breaking into the prison using the Ghost Rider as an ally, something he didn’t know about. Now it seems she’s about to blackmail him. I really do not like her.

“Lockup” was such a fun episode. It was sort of a return to form. The team has been through a lot of changes since the last season. So it was quite refreshing to she them all fight together again, even if Daisy was reluctant. Having Ghost Rider as part of the team was a thrill. Now with him being responsible for losing his uncle, he’ll have to stay on board for a while. This episode pretty much had it all. It dealt with the conflicts among team members, and S.H.I.E.L.D. kicked a lot of ass. The action, which mostly consisted of some spectacular hand-to-hand combat, was thrilling. Humor was once again skillfully placed. Amidst all the excitement, this episode felt like it was moving the story along and setting us up for some sinister stuff to go down. The momentum of the season was surely picked up this week.

Marvel's Agents of SHIELD: "Lockup" Review S.H.I.E.L.D. rocks the jailhouse Warning: This review is packed with blazing SPOILERS. While this fourth season of Agents of SHIELD has had plenty of excitement in its previous four ep...
0
Average User Rating
0 votes
Please sign in to rate.