The Simpsons will never run out of ideas, because things always happen in real life that can be Simpsonized. This Sunday, Mr. Burns is going to open his own University a la Trump U in the episode “The Caper Chase.” Al Jean gave a conference call with reporters to discuss the episode. 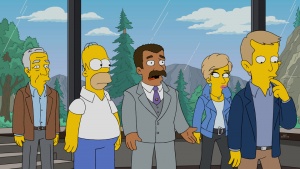 “Mr. Burns wants to endow a nuclear studies program at Yale but he can’t believe how politically correct Yale has become,” Jean said. “He decides to found his own for profit college. Never having been aware that you can have a college for profit, he’s really excited.” 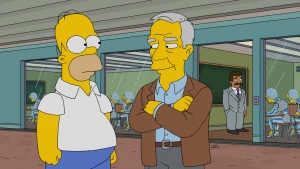 “Everything he says in this episode really gets a laugh. We do a thing with a time cut and he goes, ‘That was a very useful time cut.’”

As for the power plant, Burns puts that on the back burner. “They’re looking for teachers and Mr. Burns says, ‘Well, what do you think of when you think of a teacher? You think of someone low paid, no health care, so there they are. Just pull them off the plant one by one until the power goes out. We’ll be fine.’”

Trump U came to light during President Trump’s campaign, and it’s already somewhat old news. Jean said the idea came up before the Trump news.

“The satire of a for profit college was conceived before Trump University hit it big,” Jean said. “So we figured that this is going to be a topic that was good whether he won or not. It seems to be something that’s going to be with us for a long time.”

The average Simpsons takes about nine months from script to final animation. Jean said they rushed “Caper Chase” through development to remain timely.

“I think we made for profit colleges look even greedier because of what happened,” Jean said. “We rushed it. We sped the idea up but we knew anything with Trump goes 90 miles an hour. Now he’s settled his way out of that lawsuit more or less. We knew his involvement might not be central to people’s thoughts but we knew the topic was a really good one and Mr. Burns would be the perfect guy to run one.” 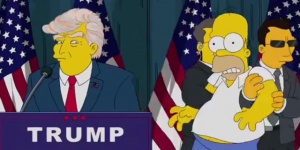 Saturday Night Live can count on angry Trump tweets every Sunday morning at 3AM. Jean is waiting for Trump to mock The Simpsons

“I could only be honored. If Trump didn’t tweet us for depicting his hair as an orange dog, I don’t know what would bother him. We have a picture of him signing a poster, a depiction we did of him but I don’t know if he knew where it came from.”

Although the title is an homage to The Paper Chase, Jean said the movie is not directly spoofed. “If there’s any movie it references, it’s more Ex Machina,” he said.

After this Sunday there are more significant Simpsons episodes coming. “April 16 I believe is 30 years since the first Tracey Ullman episode featuring The Simpsons so we mark that. Not this week, but the following one has a really amazing anniversary.”

The season finale is a good one too. “Homer has to decide whether he’s going to hit a dog or Gil with his car, and he chooses Gil. The court says, ‘That’s great.’ Springfield sort of becomes a dog town.”

This year already had many Simpsons milestones. They did their first one hour episode “The Great Phatsby” and did their first sequel. With the success of “Kamp Krustier,” Jean says they are thinking of other classic Simpsons they could revisit.

“People talk about Hank Scorpio. That would depend on whether Albert Brooks would be interested in doing it obviously. There are a couple others that I think would be good. We might. It was really fun to do and we were glad that David Stern came back to do it.” 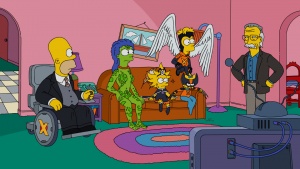 Next year, the annual “Treehouse of Horrors” will break new ground too. “This year’s Halloween show is going to be a very interesting foray into new media. We’ll show some of it at Comic-Con.”

Stay tuned for future Halloween episodes too. “[Episode] 666 by a fortuitous coincidence airs in October so it will be a Halloween show. We’ve already got it worked out. Not next year’s Halloween show but the one after I think. We will do an episode 666. We’re going to get to that number. I’m just worried that it will mark the end of the world.”

The Simpsons airs Sundays at 8PM on Fox, daily at FXX and on demand on FXNOW.

The Simpsons will never run out of ideas, because things always happen in real life that can be Simpsonized. This Sunday, Mr. Burns is going to open his own University a la Trump U in the episode “The Caper Chase.” Al Jean gave a conference...
0
Average User Rating
0 votes
Please sign in to rate.