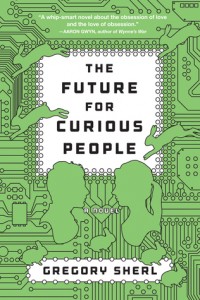 Two mid-twenty somethings, living in a world where you can choose to view a snippet of your romantic future with a person of your choice, unknowingly lead themselves into a quagmire of love, heartbreak, and obsession. The premise of The Future for Curious People by Gregory Sherl asks the questions, if you could know your future with your significant other, would you take that risk? And if you did, how far would you go to find true love?

The novel, while incredibly creative, often feels a tad too ambitious. The chapters switch back and forth between two main characters, Evelyn and Godfrey. Both narrators are in serious and complicated relationships with other people, which carries much of the plot of the novel. While Evelyn and Godfrey live incredibly detailed and full lives, it is often challenging to see past the stereotypical “other man” and “other woman” aspects of their significant others, Adrian and Madge. The underdevelopment of these two characters makes it exceedingly difficult to understand the decisions that our main characters make.

The “envisioning” sessions are some of the most interesting sections of the novel. In this world, people pay professionals to allow them to view a mini-movie of their future with a specific person, usually their significant other at the time. There are predetermined time jumps (10, 15, 20 years, etc.), as well as intriguing restrictions, particularly the inability to see products, as this knowledge could be used to the viewer’s commercial advantage. Also, most sessions last less than a few minutes, so they really only show a brief moment of the future. While the author scatters many envisioning sessions throughout the novel, some confuse more than elaborate the plot. Evelyn, who becomes obsessed with her romantic future, spews out various names in her sessions, often too many for the reader to keep straight. Many times I found myself struggling to remember specific people that she referenced once or twice at the beginning of the book, which became frustrating.

While I was impressed by the ideas and themes throughout, the plot occasionally seemed all over the place. While our main characters do “meet” fairly early in the story, they remain virtual strangers until half-way through the novel. This plot choice confuses, as I feel the two characters’ relationship could never be realized fully. There simply was not enough time for them to grow into a believable one.

All in all, the author managed to emphasize core themes, but fell a bit short on the details that add heart to the story. While the plot did not always capture my attention, the book still had enjoyable parts. As singular characters, Evelyn and Godfrey were incredibly relatable and entertaining, and they both left me laughing out-loud several times. Unfortunately, for a book about love, the relationships were not strong enough to leave me yearning for more.

The Future for Curious People by Gregory Sherl, Review by Corinne Donnelly Two mid-twenty somethings, living in a world where you can choose to view a snippet of your romantic future with a person of your choice, unknowingly lead themsel...
0
Average User Rating
0 votes
Please sign in to rate.