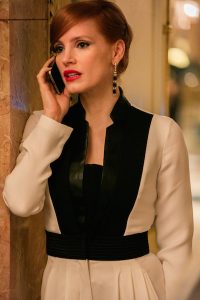 Miss Sloane is the grown ups arguing articulately movie of the year. It’s set up to blow the lid off the lobbying racket with a scandalous trial, but it ends up making lobbying look thrilling.

Liz Sloane (Jessica Chastain) goes before the senate to defend herself. She took on a new client lobbying for a bill on background checks for firearms, against her former company’s pro-gun client. The new company, run by Rudolph Schmidt (Mark Strong), is uncomfortable how Liz bends rules and fears she’ll cross the line.

Jonathan Perera’s script and John Madden’s direction makes lobbying electric and exciting. Liz has a fascinating bag of tricks she employs to win her side, vote by vote. She grooms one staffer (Gugu Mbatha-Raw) for the big leagues while throwing others under the bus. It shows there’s no limit to the creative ways Liz can win. 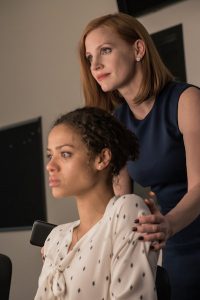 Liz is the person you want in your corner but don’t want to be friends with. Up front you see this has cost Liz her personal life, and her success doesn’t happen naturally. She takes uppers to maintain the pace. And does it even get results? That’s what the story explores.

It’s not even a matter of the ends justifying the means. The ends may actually lose supporters. It turns out being right isn’t what people really want. It may seem like they do as everyone is shouting to be heard, but you find that being demonstrably correct only alienates people. Of course, Liz’s job is a matter of votes, winning a majority, but the subtext is how people on both sides feel after a win.

Every character in Miss Sloane speaks with conviction. I wish I always had the concise words to say that matched my beliefs, but I give myself a break because I don’t have a Hollywood screenwriter writing for me. Liz gets rattled a few times so in those moments I can relate, but I aspire to be as clear as her. Aaron Sorkin is the natural comparison for this kind of dialogue, and it deserves the favorable comparison. The difference as I see it is that the characters in Miss Sloane are not speaking to sound good, except for when they’re on camera and it’s part of the strategy. In private, they are speaking to get the conversation done, which is a different but equally effective method than trying to say the cleverest thing imaginable. 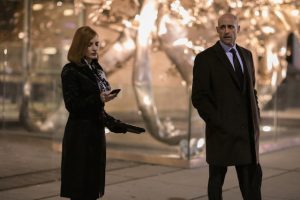 I always hope movies like Miss Sloane can make people think about the arguments we have, yet every time a movie like Miss Sloane comes out, it feels like it’s exactly the movie the world needs. I would love to live in a world where Miss Sloane was pure science-fiction, but until then I’m very glad it exists to demonstrate the complexity of arguing.

Miss Sloane is the grown ups arguing articulately movie of the year. It’s set up to blow the lid off the lobbying racket with a scandalous trial, but it ends up making lobbying look thrilling. Liz Sloane (Jessica Chastain) goes before the...
0
Average User Rating
0 votes
Please sign in to rate.