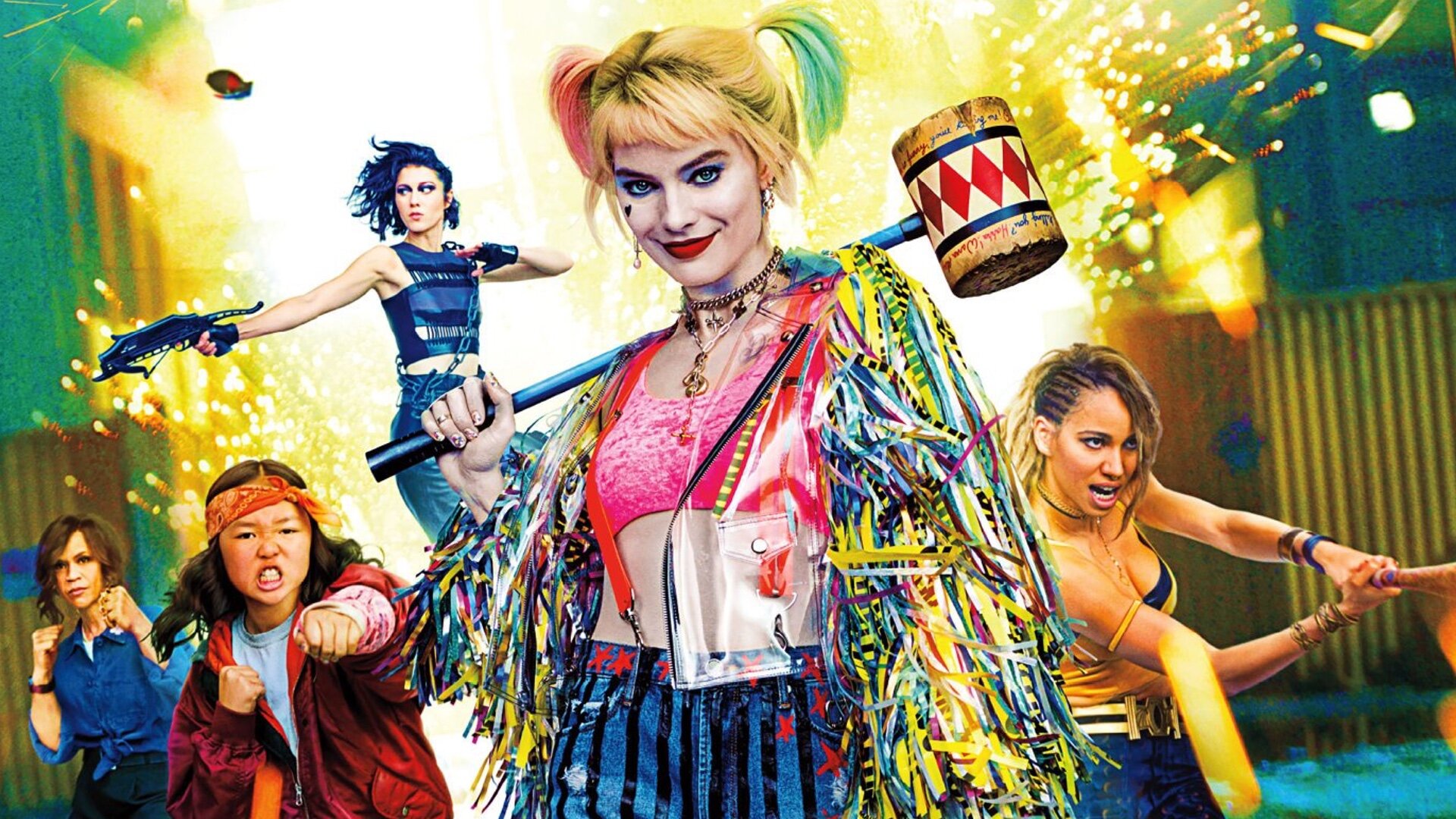 To talk about Birds of Prey, let’s take a trip back to the summer of 2016 when Warner Brothers and DC Films released Suicide Squad into theaters. As a lifelong fan of DC comics, I remember walking out of that film, wondering what I just watched. I am not afraid to admit I’m a DC apologist, but Suicide Squad broke me. The film was a mess on every level, and the all-star cast couldn’t do much to elevate the poor writing and direction. I have enjoyed most of the recent DC films, including Justice League and Batman V Superman, even while understanding why others don’t. Personally, I was able to appreciate them for what they were despite their flaws and WB’s interference with Zach Synder’s vision.

In the summer of 2017, Wonder Woman, directed by Patty Jenkins and starring Gal Godot, was released into theaters. The film was a huge financial success and hailed by many, including myself, as one of the best superhero films.  The unexpected success of Wonder Woman seemed to re-encourage the creatives at DC Films to branch out and give filmmakers the freedom to bring their vision to the world of DC.  Aquaman, Shazam! and Joker were all significant risks for WB and DC, but they believed in the filmmakers and let them have their way. This has put DC on a good run, as they are far more open to taking chances. These four films dared to be different and didn’t follow a specific formula.

This brings me to Bird of Prey (And The Fantabulous Emancipation of One Harley Quinn), DC’s latest standalone film told through the eyes of the one and only Harley Quinn (Margot Robbie). When Roman Sionis (Ewan McGregor), Gotham’s most heinous gangster, learns Cassandra Cain (Ella Jay Basco) has stolen a precious diamond, he will stop at nothing to get it back. Through a series of unexpected events, Harley gets captured by Roman’s goons and offers to help him retrieve the diamond in exchange for her life. Roman agrees to her offer and gives her a firm deadline of 24 hours to get it back into his hands. 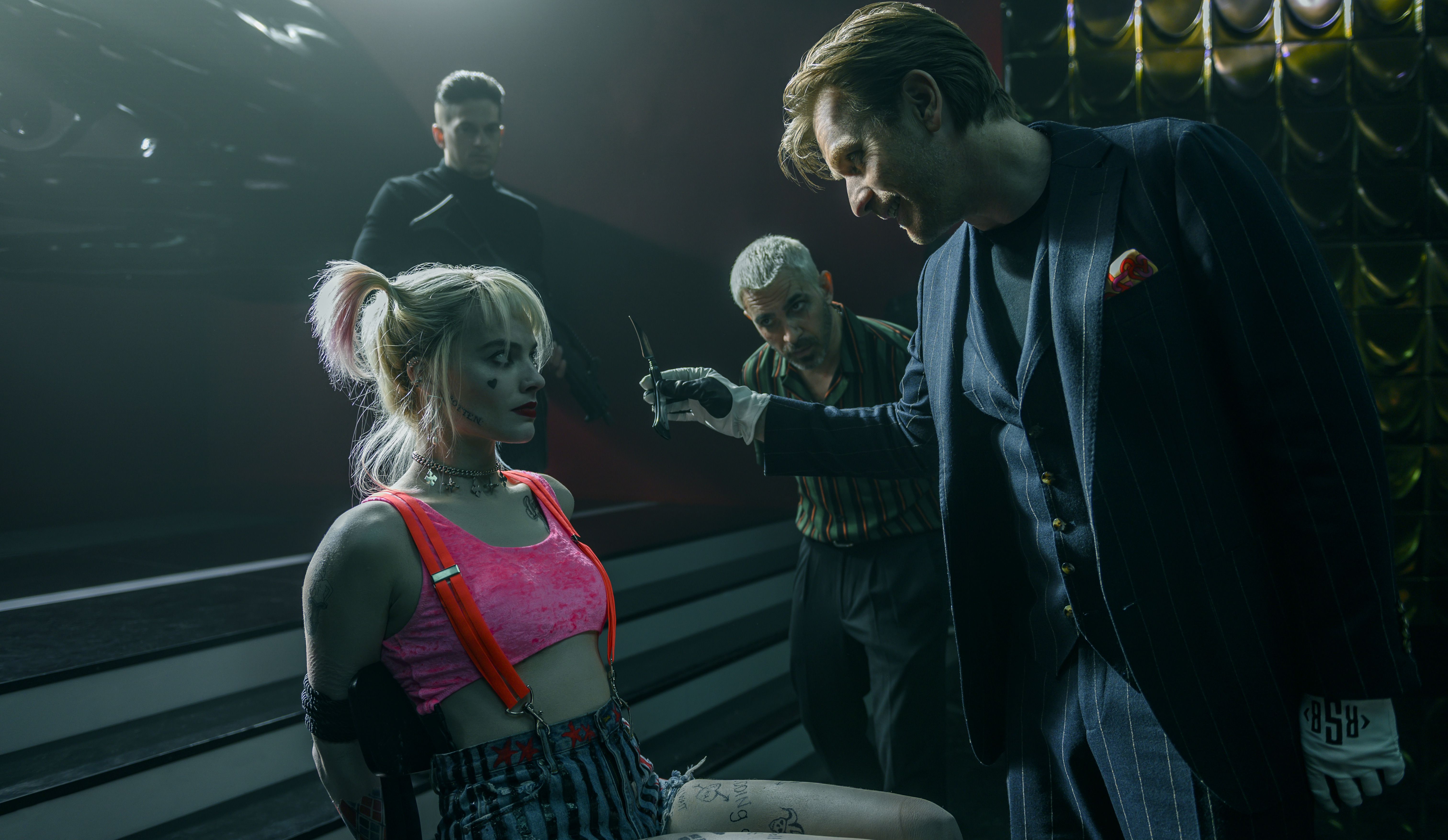 Birds of Prey continues the recent trend of DC films pushing boundaries and ignoring the typical comic book movie formula. Screenwriter Christina Hodson, who recently saved the Transformers franchise with Bumblebee, takes the audience inside the mind of Harleen Quinzel. Hodson crafts a wholly entertaining story centered around Harley’s life. Her script covers everything one would need to know about Harley from her breakup with Mr. J to how she has wronged a bunch of people all over Gotham. This script is wild, crazy, and whacky, but it works because director Cathy Yan understands Hodson’s vision and perfectly brings it to life.

Yan understands Birds of Prey is an origin story of sorts, centered around more than one character.  She does a fantastic job recapping Harley Quinn’s backstory through an animated sequence at the beginning of the film. You don’t need to see Suicide Squad, because Yan and Hodson got you covered. Also, keep in mind Yen is directing this film from Harley’s perspective, so if you know anything about this character, you know she is a mess. Some critics are probably going to complain the film is too random, and not everything makes sense, but to me, that is part of what makes this movie so great and memorable. In an attempt to explain how off the wall this film gets at times, there is a chase sequence involving an egg sandwich. If you can’t enjoy the ridiculousness of this moment, then clearly, this movie isn’t for you.

Truth be told, I didn’t like Harley Quinn in Suicide Squad, so I was cautious about Birds of Prey because the majority of this film is centered around the character. Fortunately, Robbie was fully committed to this role and had no problem making this new and improved Harley Quinn her own.  She clearly had the time of her life making this film and believed in it so much she also served as a producer. As an unreliable narrator and a loon whose actions are entirely unpredictable, Robbie has no problem embracing all of this with ease. This character could have easily been annoying and unlikable, but Robbie turns her into this lovable outcast that we as an audience want to root for. Harley doesn’t give a shit, and I love how she continually breaks the fourth wall to address the audience. 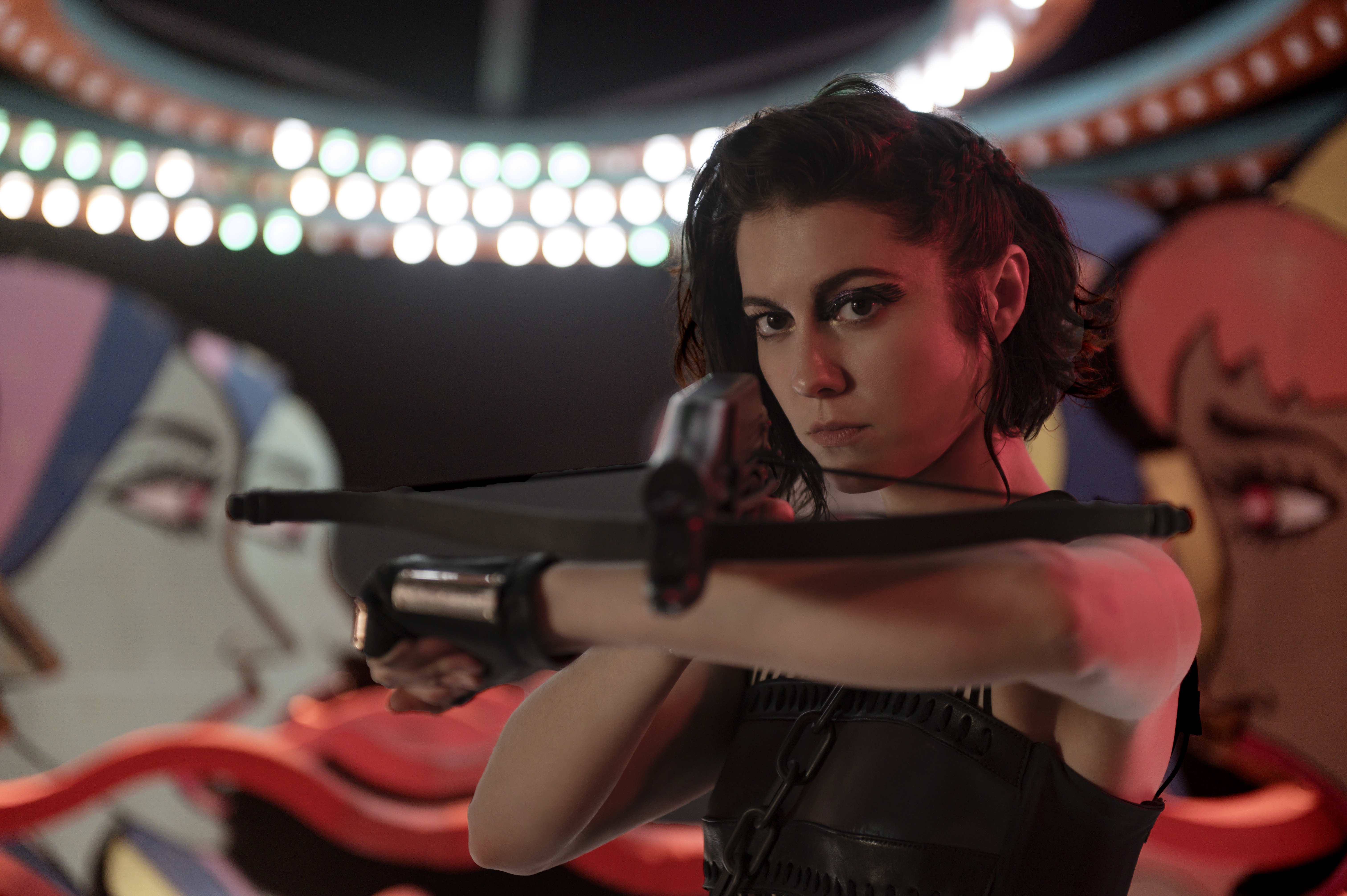 But as I said earlier, this isn’t just a Harley Quinn origin story. Throughout the film, the audience is introduced to Black Canary (Jurnee Smollett-Bell), Huntress (Mary Elizabeth Winstead), and Renee Montoya (Rosie Perez). Yan gives the audience just the right amount of backstory on each of these characters so the viewer can understand who they are and why they are crucial to this story.  Each one of them gets their moment to shine, but it is Winstead who steals the show whenever she is on-screen. Winstead is criminally underrated as an actress and has been for quite some time. I am happy to see her in a big-budget studio project where her talent is accurately shown, unlike her role in Gemini Man last year.

Ewan McGregor as Roman Sionis aka Black Mask is as menacing as he is flamboyant. McGregor is such a well-rounded actor that he has no problem playing a character whose behavior seems similar to that of a person suffering from bipolar disorder. McGregor embraces the material and balances the fun with seriousness, whenever it is called for.  I have been a big fan of Chris Messina for years, and it is nice to see him take on a role unlike anything he has done before. As Victor Zsasz, Messina transforms into this bizarre serial killer who takes his job way too seriously. I love how demented the character is, and Messina surprisingly has no problem playing crazy.

This brings me to Ella Jay Basco, whose character Cassandra Cain, might be viewed as a secondary character but plays a huge role in this movie. I like what Basco brought to the character and how she was able to hold her own alongside Margot Robbie. Cassandra Cain is the linchpin of this story, and Basco commits. You can tell that Basco, like the rest of the cast, is just having the time of her life. 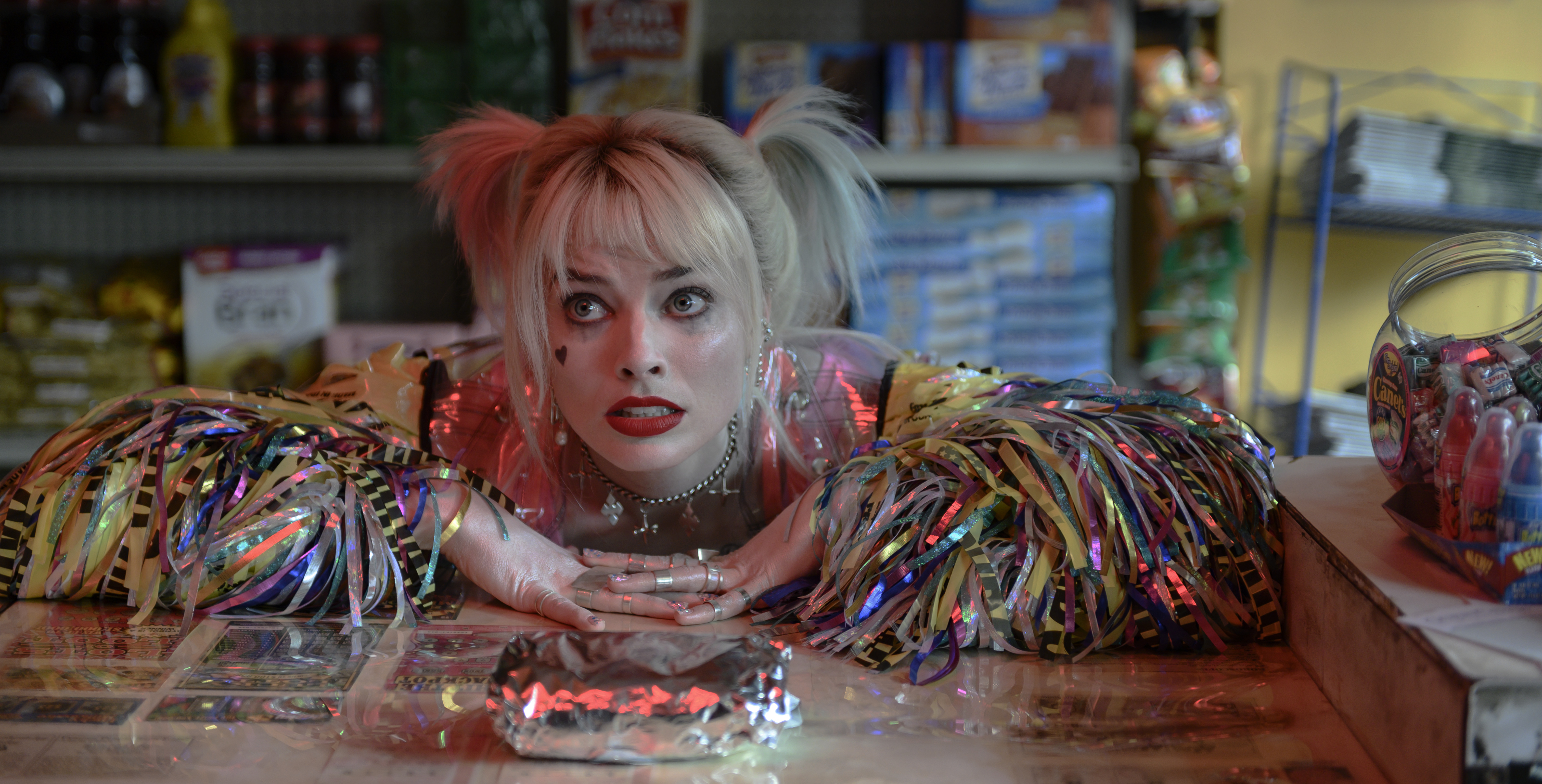 The action sequences throughout Birds of Prey are a total blast too. There are some excellent fight scenes, and Yan doesn’t hold back from showing us some blood and gore. A scene near the end of the film where all of the women are fighting together is probably one of the most badass action scenes in recent memory. It might not have given me goosebumps like the No Man’s Land scene in Wonder Woman, but it is definitely on par with John Wick level awesomeness. I also have to applaud the film’s costume designer, who really gives each of these characters their own very distinct look. Oh, and the cinematography by Matthew Libatique is freaking gorgeous. You feel at times like you are inside of a comic book, but one that feels like an utterly demented version of our current society.

Cathy Yan has created a music-infused celebration of female badassery. This film once again proves DC is continuing to take big risks and push boundaries. This is the perfect Harley Quinn movie, and Margot Robbie absolutely kills it. I adored spending time with all of these ladies and look forward to seeing what comes next in the sequel/spin-off.  Birds of Prey gives zero fucks and is a full-on, balls-to-wall action-comedy. I loved every moment of it.

Scott’ Movie Man’ Menzel’s rating for Birds of Prey is an 8 out of 10. 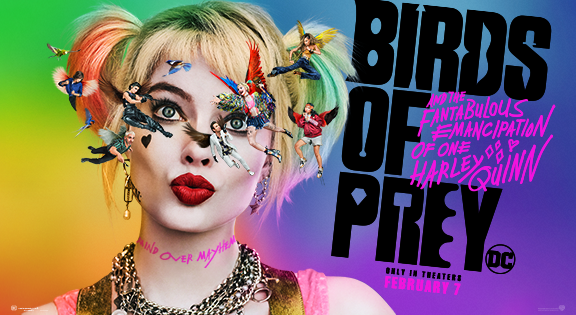 Birds of Prey Review: Girls Just Want To Have Fun