Blu-ray Review: ‘Inside Out’ Returns to Pixar Perfection

Once the emotionally resonant powerhouse, Pixar has sadly stumbled a bit in recent years, focusing more on unnecessary sequels and prequels rather than its signature heart-tugging narratives. Yes, we’re still (after four years) looking at you, Cars 2. Even the moderately superior Monsters University deserves some flak to an extent.

Thankfully that is not the case with the studio’s 15th feature film, Inside Out. On paper, Inside Out seemed like a difficult sell. The film follows Riley (voiced by Kaitlyn Dias), an 11-year-old tomboy from Minnesota whose family moves cross-country to San Francisco. Away from her friends, her home and her hockey team, the transition in California isn’t exactly smooth for this high-spirited tween.

But what turns Inside Out on its head (literally) is what transpires inside Riley’s head. Riley’s behavior is controlled by five color-coded emotions, easy to differentiate for younger audiences. There’s Joy, the always cheerful fairy-like leader of the group, voiced by Amy Poehler. Sadness (Phyllis Smith) is the downer, always blue (physically too). Bill Hader’s Fear is the cautious one of the bunch, a bit high strung, but there to keep Riley safe. The Office’s Mindy Kaling voices Disgust, who steers Riley clear from being physically and socially poisoned. Finally, there’s Anger, the adorable little rageaholic, perfectly brought to life by comedian Lewis Black.

From the start, understanding Riley’s world and what goes on in Headquarters (Riley’s brain) is straightforward. For example, if Joy assumes the control panel, Riley will smile or express other positive emotions. The same goes for the other four emotions, who are provided fewer opportunities. And each event creates a color-coded orb, a physical memory if you will that can be replayed when touched.

Things go haywire when Sadness is off her game, touching one of Riley’s positive memories, turning it from a joyful yellow to a somber blue. Joy and Sadness fight over the memory balls, but end up getting sucked out of Headquarters and into long term memory. Without the important memories intact and two key emotions away from Headquarters, Riley breaks down on the first day of school, an absolute no-no in trying to fit in. We’ve all been there one way or another.

From here on out, Inside Out goes on a tiny road trip inside Riley’s mind. Joy and Sadness venture through long term memory (colorfully shaped like brain folds) and her Islands of Personality to get back to Headquarters. With Fear, Disgust and Anger running the show, Riley’s personality begins to change drastically, particularly after acting out towards her parents during dinner. Thematically, this is where Inside Out nails the struggles of fluctuating, sometimes raging emotional changes at that age.

Inside Out could have easily flubbed on various occassions with its balancing act of simplicity and complexity. But once again, writer/director Pete Docter (Up) blasts through potential obstacles with ease. Joy sets up some hefty world-building exposition at the start. But the world is vastly accessible, where everyone, young and old alike, can understand what a train of thought is (a literal train) or experiencing deja-vu or how dreams are concocted. Imagine a mini Hollywood inside the brain. The cleverness and wit of Docter’s screenplay doesn’t stop there.

Inside Out hits a home run on every emotion. You’ll laugh. You’ll cry. You’ll get worried at times. It’s one emotionally riveting roller coaster that takes Pixar backs to the good old days of Toy Story and Finding Nemo. Not only that, but Inside Out is the most empathetic Pixar film out there. Younger audiences will relate with Riley’s emotional complications. The same goes for adults, who experienced these changes when they were younger and watch their own children go through the same.

Pair that with Michael Giacchino’s (Tomorrowland, Jurassic World) terrific score, full of jazz and flair, which captures the emotions riddled throughout the film. The sad moments are certainly tissue-worthy. Giacchino is already one of the most talent film composers working today, but his score here is nothing short of memorable.

Like many Pixar films before, Inside Out transcends the stereotype that animated films like this are simply aimed at children and nothing more than an entertaining diversion. But once you start pulling back the film layer by layer, there’s something much masterful and mesmerizng in meaning at its core. 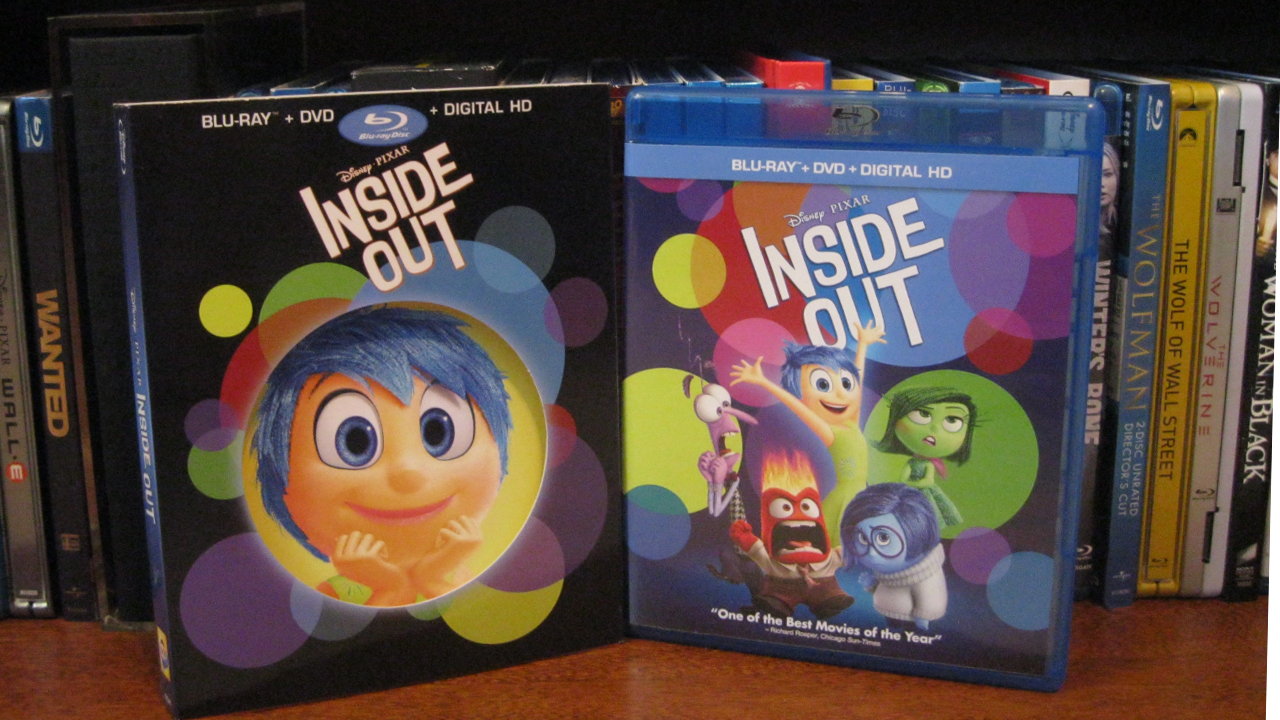 For its 15th feature Pixar film, Buena Vista Home Entertainment does not disappoint with the video quality of Inside Out. The world inside Riley’s mind is goregously vibrant, particularly during the sequences with Joy and Sadness in long term memory. The colors of the five emotions pop. Joy is an optimistic, perky yellow. Sadness is a cool blue, matching her character’s depressed personality. The same goes for Anger, Disgust and Fear. The real-life scenes are incredibly detailed without any sacrifice in the transfer.

Inside Out’s lossless 7.1 Master Audio DTS-HD soundtrack captures every detailed sound from start to finish. The road trip sequence inside Riley’s mind great benefits from this. From the chugging of the train of thought to a domino effect of memory balls, there’s a rich array of sounds throughout. Dialogue is coherent and rich laid down to a fault. And Giacchino’s emotionally powerful score hasn’t sound better.

Inside Out is laced with an abundance of special features, though many are short and straight to the point. Audiences who watched the film in theaters might remember the sappy short, Lava. Riley’s First Date? is a highly anticipated tie-in short, especially for those who want to know more about a certain scene near the end of the film. Other supplements highlight the women of Inside Out, the overall story, deleted scenes and sounds within the film. It’s an on-par Pixar companion to the feature.

Blu-ray Review: ‘Inside Out’ Returns to Pixar Perfection

Blu-ray Review: 'Inside Out' Returns to Pixar Perfection Once the emotionally resonant powerhouse, Pixar has sadly stumbled a bit in recent years, focusing more on unnecessary sequels and prequels rather than its signature heart-tugg...
0
Average User Rating
0 votes
Please sign in to rate.