Off the heels of the cultural phenomenon that is Frozen to the huggable, action-packed Big Hero 6, Disney’s 55th animated feature had a steep mountain to climb in becoming the next key player in the studio’s second unofficial “Renaissance.” Zootopia did exactly that, going above and beyond the cliché beats one would come to expect from an animated anthropomorphic release.

Set in Zootopia, an animal utopia where both predator and prey, large and small co-exist, an eager and optimistic Judy Hopps (voiced by Ginnifer Goodwin) moves to the big city to fulfill her dreams of becoming the first ever bunny cop. With the belief so ingrained in her since childhood that anyone can be anything, Judy is determined to make a difference in Zootopia. From day one, she’s hardly taken seriously by her buffalo superior, Chief Bogo (voiced by Idris Elba), who automatically relegates her to parking duty. Even though, it’s not placing her in the middle of the action catching criminals and making a difference, she’s attempts to make the most out of it.

Zootopia shifts gears in a hurry when Judy inserts herself into a missing mammal case and pairs up with Nick Wilde (voiced by Jason Bateman), a red fox, who fits the stereotype of a slick con artist. Putting her career on the line, Judy and Nick have 48 hours to venture to all the diverse environments of Zootopia and ultimately solve the case.

What separates Zootopia from the typical animated film is its keen ability to tackle real-world adult problems on a bright, colorful canvas. Zootopia is a society built on equality and matters turns south when themes of discrimination and social divide are inserted into the plot. Directed by Byron Howard and Rich Moore, Zootopia adds an awful lot to its plate. For younger audiences, the thematic elements are on a delightful level to enjoy. But once older audiences begin to start peeling back the layers. Throughout the film, Judy is referred to as a “token bunny” and Nick is uneasy with being generalized as a predator.

When Zootopia’s not trying to overload on the social discussion, the accomplished screenplay written by Jared Bush and Phil Johnston keeps its heart beating with the love-hate relationship between Judy and Nick. In reality, a fox and a bunny wouldn’t be allies. Still, Judy’s an idealist with a never-give-up attitude, even though obstacles stand in her way in every direction. From disgruntled citizens berating her for giving them a traffic ticket to Idris Elba’s Chief Bogo, who sets her up to fail, she’s still gives it her all. Bateman’s top-notch voice work as Nick is perfect to play off of Goodwin’s charm. Nick might be a sleazy con artist at first, but there’s much more going on below the surface, including a poignant backstory to bring him full-circle.

One can’t deny the visual spectacle Zootopia offers either. Rich in detail and as diverse as its population, Zootopia is a well-imagined world where everyone lives in harmony. It makes sense with buses and businesses catering to all types of animals that live there. From its hippie nudist colony to a small rodent town where Judy seems like Godzilla running rampid, it’s a mesmerizing juxtapositon that works to its advantage. Even more confined moments straight out of The Godfather and an scene-stealing sloth DMV sequence capture what it’s like to live in Zootopia. The latter two are utterly hysterical.

Zootopia fits like a glove in today’s society, facing today’s problems head-on, while still tipping the hat to pop culture just enough where it’s not overwhelming. Sure, Judy’s video chatting with her ever-worrying parents and even whipping out the MP3 player to listen to Gazelle’s (Shakira) new single, but it’s less of a gimmick than how it appears on paper. For all its loud colorful style and ideally upbeat score by Michael Giacchino, make no mistake that there is plenty of ballsy substance in Zootopia. It’s more than we come to expect from what was depicted on the surface as another run-of-the-mill talking animal film.

Disney undoubtedly has a hit on their hands with Zootopia. This shouldn’t be the end, because the wonderful world-building in the film is simply the tip of the iceberg as to what this franchise could accomplish in the long run.

SEE ALSO: Zootopia Review: And the Award for Best Animated Feature of 2016 Goes to… 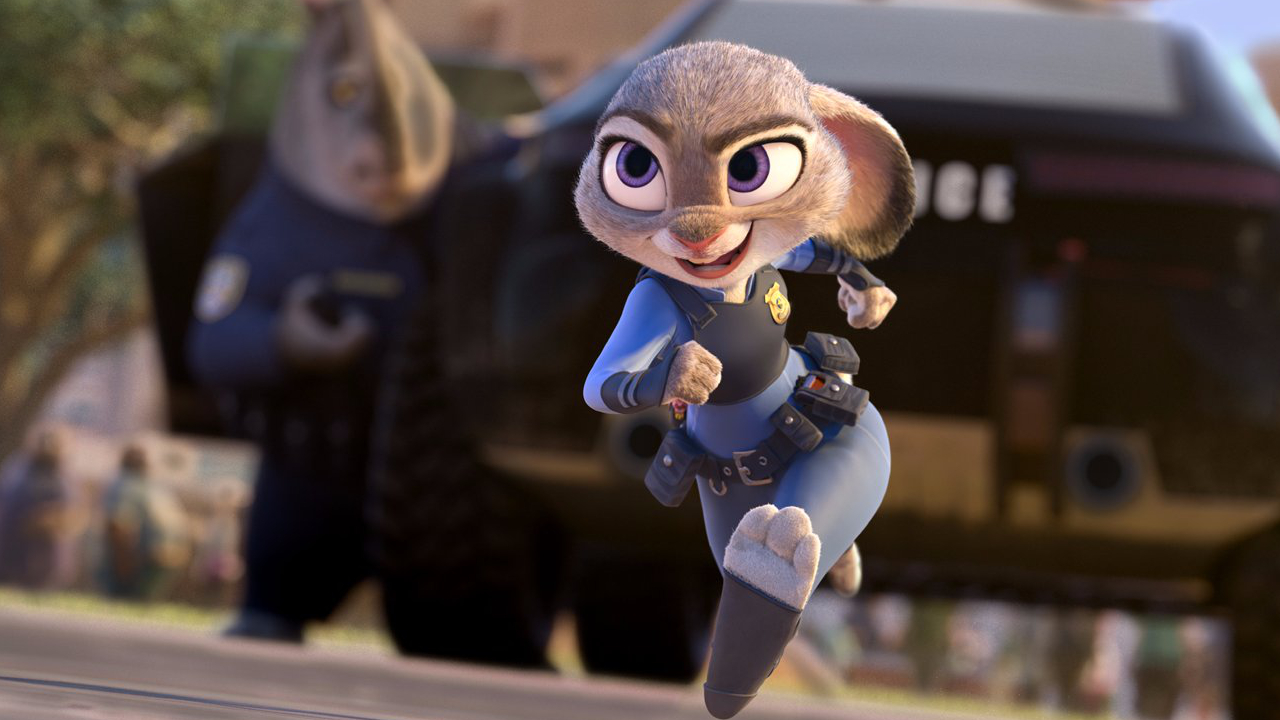 Once again, Disney delivers a pitch-perfect 1080p transfer for Zootopia, which we’ve come to expect after the Blu-ray releases of Frozen and Big Hero 6. From start to finish, the color palette pops in every aspect of Zootopia. The day scenes are particularly well-realized. The detail of the diverse cast of characters is crafted with standard Disney care. As the two predominant character, Judy and Nick are richly defined down to the texture in their clothes and fur. Fantastic work from Disney overall.

Disney’s 7.1 DTS-HD Master Audio track is a lossless achievement. Zootopia can feel like a bustling film at times, always on the movie, but the audio track never overpowers at all. Dialogue is crisp and coherent. Giacchino’s uplifting and adventurous score is transfered into the audio track with perfect care. Subtle growls and clawing are just a few sounds that are capture well and add to the overall experience of the film. In addition to the English 7.1, Zootopia also offers French Dolby Digital 5.1 and Spanish Dolby Digital 5.1.

Buena Vista Home Entertainment hasn’t always been king when it comes to supplemental content as of life. Still, the Blu-ray combo pack of Zootopia contains enough additional content to satisfy regular consumers. Zoology: The Roundtables is by far the highlight of the disc, breaking the featurette down into three sections – Characters, Environments and Animation. The other main attraction is about 20 minutes of deleted and alternate scenes, including an alternative take of the Jumbo Pop scene. And for the Shakira fans, her end song “Try Everything” is featured as a music video.