You don’t have to be a teenager to love a teen movie. Actually, you can probably appreciate a good one even more if you’ve been through that time already. Even with all the new technology my generation never had to grow up with, the universal themes remain the same. The Edge of Seventeen is a beautiful portrait of teen angst.

Nadine (Hailee Steinfeld) is a 17-year-old social outcast. Things have been rough for her since her father died. At least she has her best friend Krista (Haley Lu Richardson) until Krista starts dating Nadine’s brother Darian (Blake Jenner). This makes Nadine lash out even harder at Krista, Darian, her mother (Kyra Sedgwick) and her teacher (Woody Harrelson). 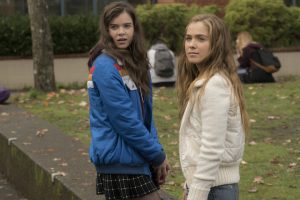 First of all, I love these girls. In a flashback, their seven-year-old selves bond adorably over a caterpillar. In the present, they drink when their parents are away but they say home so it’s safe experimenting. They are sensitive enough so that their acting out is more sympathetic than abrasive.

The Edge of Seventeen is a teen comedy for the Facebook generation. It acknowledges all the new technology teens have at their disposal, but it’s not all about social media. There have been recent movies that are so desperate to show they understand texting and Twitter that the screen is cluttered with activity. I do wonder if teenagers still call each other to talk on the phone, but I take this movie’s word for it and I appreciate that the technology is only a facilitator to the relationships. If you know how to use it, that’s what it’s supposed to be for anyway. There are some predictable technological accidents but it’s also a good lesson. Don’t type drafts live. Copy and paste them from Notes instead. 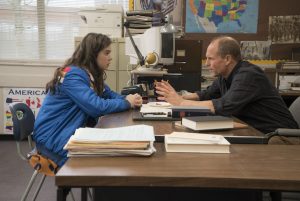 The real heart of Edge of Seventeen is the big picture stuff Nadine is going through. Nadine is very articulate but too self-conscious to be self-aware. People used to tell me I think too much and I think that’s oversimplifying the issue because it’s not the amount of thinking that one needs to outgrow. It’s to stop judging situations and people and learn to just live. Some people don’t learn that until much later than high school.

The Edge of Seventeen is sensitive enough to youth to understand where this neurosis comes from and not to judge its characters for it either. There are wonderful individual moments that capture the awkwardness of first kisses, and just figuring out where you stand with people. Playing at grown-up relationships when you don’t even know what you want yet can be dangerous. Fortunately it does not get violent and the lesson can still be learned.

The Edge of Seventeen is rated R for language, but it’s still tame compared to real teenagers. These teens are sexual, but not vulgar. They joke about hand jobs and their mom’s tits, and it’s endearing. 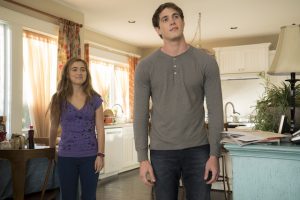 The cast is just lovely with Steinfeld and Richardson playing a sincere friendship, which is all the more heartbreaking when it dissolves. Jenner is sensitive to keep his dreamboat popular jock character from being a cliche. I believe the way these two siblings found different ways to cope.

It warms my heart to see this generation get such a profound and honest portrait of the world in which they are growing up. They deserve what I got with Heathers, Revenge of the Nerds, Can’t Buy Me Love, Ferris Bueller and Weird Science. But be sure this is for the next generation, because Twins is now an old movie that a stoner references as a joke.

‘The Edge of Seventeen’ Review: Some Kind of Wonderful

You don’t have to be a teenager to love a teen movie. Actually, you can probably appreciate a good one even more if you’ve been through that time already. Even with all the new technology my generation never had to grow up with, the univers...
0
Average User Rating
0 votes
Please sign in to rate.