The trailers for The Girl on the Train make it look like a woman witnessed a murder from a passing train. People who read the book know that’s not the story and now viewers will find out too. 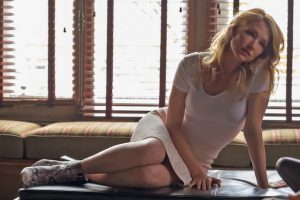 Megan (HALEY BENNETT) in DreamWorks Pictures’ “The Girl on the Train.”

Rachel (Emily Blunt) is a divorced alcoholic who rides the train to work longing for the passion with which it seems Megan (Haley Bennett) lives her life. Megan is the nanny for Anna (Rebecca Furguson), who happens to be married to Rachel’s ex-husband Tom (Justin Theroux). Got all that?

I can see how it would be hard to accurately encapsulate The Girl on the Train in a trailer. I’m not even going to completely because part of the mystery is figuring out whose perception of the other is correct. When Megan goes missing, Rachel believes she saw what happened but her condition and history with the parties involved makes her a suspect too. 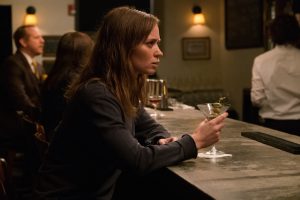 EMILY BLUNT stars in DreamWorks Pictures’ “The Girl on the Train.”

The Girl on the Train really pushes Rachel as an unreliable narrator, although she doesn’t really narrate. The film opens with narration from all three women but then shifts into a more objective perspective. I kind of liked the sort of female Sunset Boulevard quality of the narration but it was probably smart of the adaptation not to continue three narrators, or even two once Megan is gone, through the entirety of the film.

Even from a third person perspective, The Girl on the Train plays with perception so that you can never take for granted what you’re seeing. The tone keeps every scene on the edge so you’re never quite sure where any scene is going. It is intentionally disorienting, and not just because of time jumps and flashbacks, but because characters question their own very perceptions. The herrings are bright red! 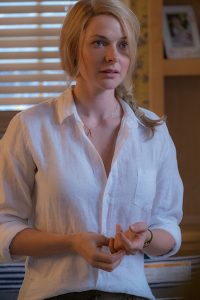 Anna (REBECCA FERGUSON) in DreamWorks Pictures’ “The Girl on the Train.”

Blunt gives a harrowing performance as Rachel, drunk and staggering, even violently unhinged in parts. Bennett reveals Megan to be damaged and vulnerable in a tragically sympathetic role. Ferguson is so transformed I didn’t even recognize her as my favorite Mission: Impossible badass.

An early bit where Rachel leaves her phone recording a possibly incriminating video feels blatantly contrived, but the film has far more up its sleeve than that so it becomes a minor plot point. A theme of suburban unhappiness sort of feels thrown in there as characters occasionally blurt out things that aren’t explored. Some of those end up being misdirects to a subtler theme, a theme which I can’t discuss because it’s really a spoiler.

The Girl on the Train has a lot to coordinate and the screenplay does a good job laying out the three relationships and twisting them throughout the film. The resolution is a satisfying conversation starter and it’s three standout performances you won’t want to miss.

The Girl On The Train Review: Training Day

The trailers for The Girl on the Train make it look like a woman witnessed a murder from a passing train. People who read the book know that’s not the story and now viewers will find out too. [caption id="attachment_31875" align="align...
0
Average User Rating
0 votes
Please sign in to rate.