Tired of the cruelty and stupidity of various television shows (and the people involved with them) these days? Well so is Bobcat Goldthwait. The writer/director displays his repugnance of such media and people with the dark satire God Bless America.

The central character in America is an office worker named Frank, played by Joel Murray. Frank is often annoyed by the lack of shame and general disrespect in society, and especially reality TV, in modern-day America. After losing his job, being ignored by his daughter, and learning that he has a massive brain tumor, Frank throws caution to the wind and decides to kill a reality TV star and then himself. However, a teenage girl named Roxy (Tara Lynne Barr) witnesses Frank’s actions and intercepts him from killing himself. She then challenges Frank to take his dealings to the next level and rid the world of more people like the one he killed—and take Roxy up as an assistant in his extermination.

Goldthwait’s America is a bizarre and intense filmmaking sucker-punch. He lays his thoughts on thick with lurid depictions of violence and sharply written dialogue, not holding back for a second with criticisms of aspects of America’s culture. While this may make the film seem like a long-winded rant at times, Goldthwait manages to get a surprisingly large emotional range from the material as well.

The director not only explores the disgust of certain cultural aspects with characters, but also the loneliness that can form from being out of sync with such norms (purposely in this case) and the unusual friendships that can form with people who share similar thoughts. Such traits are found in his two lead characters, who’s emotional quality to the complexity of their ideas actually ring through—as most audience members can probably relate to some of the loneliness and annoyances, though most never take it as far (thankfully) as Frank and Roxy. Both Frank and Roxy are compelling characters in this way, going beyond their surface-level frustration and exposing the deeper sides of themselves.

Much of this praise goes not only to the way Goldthwait writes the characters, but also to the way Murray and Barr portray them. Murray’s character is more believable in the end, but Barr holds her own next to the older Murray acting-wise. The supporting characters are mostly one-dimensional, but that doesn’t matter because Murray and Barr are magnetic enough to hold it all together themselves. The two have palpable chemistry and make for one of the more memorable screen “couples” in recent film history.

As mentioned before, America is very alive in its portrayal of bloodshed. While this makes the film not for the faint of heart, others who can stomach such material will find the violence to be quite potent. This is because the action scenes are shot and edited in clever ways, avoiding the monotonous-feeling mechanisms that are applied to many action films today.

Goldthwait doesn’t rely on shaky camera movements and rapid editing to give off a dizzying effect, but rather creatively places his camera and makes intelligent cuts in order to compliment the action on screen. The violence is still stylish and over-the-top, but it speaks for itself and doesn’t rely on chaotically put-together scenes for reactions. Instead, the viewer gets angles such as an interesting ceiling shot placed towards the beginning of the film.

America also has some fun pokes at past styles and films. These include a hilarious depiction of a car explosion and a nice dialogue reference to Quentin Tarantino’s Jackie Brown. Goldthwait’s fictional clones of real-life TV shows also make for a few laughs and eye-openings.

Many films nowadays are high on excessive, repetitive visuals and movements and low on thoughts to back them up. America is opposite. Its thought are laid open-faced and it uses inventive tactics to capture them, exposing the negative qualities of many TV programs and social ways with its own bloody and astounding style. Is any of this subtle? No. But it’s refreshing to see a film that has this much to say and is simultaneously very original and entertaining. God bless you, Bobcat Goldthwait. 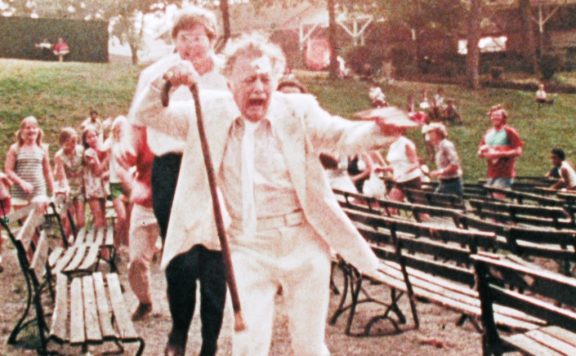 God Bless America Review By Daniel Rester Tired of the cruelty and stupidity of various television shows (and the people involved with them) these days? Well so is Bobcat Goldthwait. The writer/director displays his repugnance of such m...
0
Average User Rating
0 votes
Please sign in to rate.