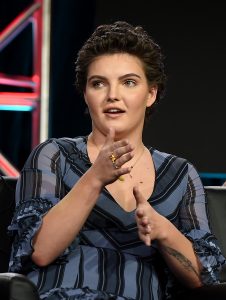 I first met Camren Bicondova at the start of Gotham when Selena Kyle was a 14-year-old on the streets of Gotham City. Five years later, Selena has come in and out of Bruce Wayne (David Mazouz)’s life and allied with various criminals of Gotham. On a Television Critics Association panel for Gotham’s series finale, Bicondova teased that she would be wearing the Catwoman suit in the finale.

Later, at Fox’s TCA party, I got one last interview with Bicondova about Gotham. Hopefully we’ll have many, many more interviews as she goes on to do great things, but this will be the last time we talk about Gotham. And since Gotham is a Batman show, I could do the interview as Franchise Fred. Gotham airs Thursday nights at 8PM on Fox.

Franchise Fred: Do you have to share the catwoman suit with a stunt person?

Camren Bicondova: I am not going to say much about it. 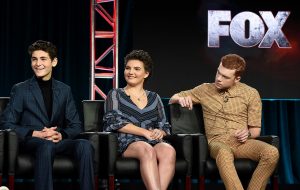 FF: Are there going to be more cats on the set as we near the conclusion?

Camren Bicondova: No. No, no cats. I haven’t worked with animals in probably two seasons actually.

FF: Have you shot the finale?

Camren Bicondova: We have. We wrapped up the season on December 11th.

FF: What were your emotions on that day?

Camren Bicondova: Oh, it was just a slur of a lot. Happiness, sadness, mostly a sense of contentment, just being really immersed in the moment and really enjoying everything for what it is.

FF: There was a lot of talk of redemption on the panel. Do you think Selena needs redemption? Is she that far gone? If so, what would redemption look like for her? 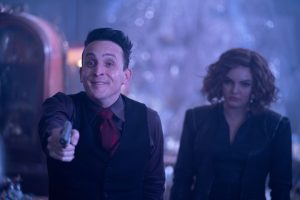 Camren Bicondova: Well, I think to her redemption is killing Jeremiah. But, in reality, redemption is finding a sense of quiet in the chaos and really just again, just embracing the people in her life for who they are. Loving Bruce, appreciating Alfred, watching out for Barbara sometimes but really looking out for herself. So I think what she thinks is her redemption I think is not what she needs for redemption. But, I think it’ll come. Whatever happens between the 10 years from the second to last episode and the last episode of this fifth season, I’m sure some kind of redemption for her will happen. I don’t think Selena’s capable of redemption really.

FF: Do you like leaving it open so the audience can imagine what happened? 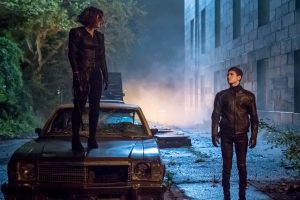 Camren Bicondova: A little bit. As far as the show and Selena and Bruce’s relationship, there’s not really an opening. If they kept it the way the script was, the audience will know what happens. I don’t know. It’s going to be interesting for sure.

FF: For me it’s extraordinary watching you grow up with the show. How do you look back on yourself first season?

Camren Bicondova: Well, I’m a completely different person. It’s all because of Selena. Like David said, a lot of who he is is due to playing Bruce. I definitely feel that way about Selena as well. Brad Pitt said once that he believes that there’s always a little bit of him in every character he plays. That really connected to me in a way. It inspired me when I heard him say that and I really became aware of how much of me is really in Selena. When life would happen and I would have a decision that I needed to make, I would always consider, “Okay, what would Selena do in this moment?” If I’m walking on the streets of New York and I didn’t feel safe, what would Selena do? The fact that that character and that kind of person was able to be an opportunity for me to bring out of myself is a complete blessing. I couldn’t ask for any other way to have a first television show and have it last five years. It’s just a complete blessing. 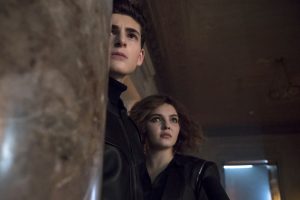 FF: We’ve usually seen Bruce and Selena meet as adults. Did you get to have a unique take on that relationship because they were teenagers on Gotham?

Camren Bicondova: That was definitely part of the uniqueness of our show was the writers didn’t rush that relationship. They really took their time and we really explored the innocence of young childhood and the kind of questioning that happens as you get older. They showed the complexity of their relationship and how they really are teenagers with old souls. That’s kind of where the conflict happens, not only that Bruce is rich and she’s poor, but they’re very different but they’re also very mature for their age. I think it was a beautiful storyline for both of us to play because it wasn’t rushed. They really took their time. The ending that Bruce and Selena get at the end of this season is brilliant.