Mace’s secret is out.

Warning: Yes, this review has plenty of spoilers.

Ever since season four premiered, Jeffrey Mace, the new inhuman director of S.H.I.E.L.D. has been shrouded in mystery. Even as we got to know and learn about him in various episodes, he always seemed like he was hiding something, making him a hard man to trust. Simmons even caught him in a lie or two. After nine thrilling episodes, this week’s Agents of S.H.I.E.L.D. finally revealed Mace’s biggest secret.

Jeffrey Mace is NOT an inhuman… and that’s not really shocking.

Now, I know I’ve never speculated that I thought Mace was lying about his inhuman status, and it’s too late to convince you otherwise. He just never did anything truly remarkable other than showing he had super strength, which can always come from a serum similar to what Captain America was given. So his reveal isn’t very shocking at all. However, that doesn’t mean I didn’t like it. The reasoning behind it, although predictable as well, is what makes Mace a more interesting character. Finding out that he is basically a political puppet, placed in S.H.I.E.L.D to pose as an inhuman to get the public to trust in other inhumas and super powered people is not a new concept necessarily – think when the government first used Steve Rogers to sell war bonds – but it has been a useful one. When the public is afraid of inhumans and Senator Nadeer is trying to paint a bad picture of them, it helps to give the illusion that an inhuman is a protecting the country on an official level. General Talbot mentioned Daisy going Rogue, making her an invalid candidate. So it seems they might have considered her for the job if she didn’t run off to play vigilante. Hm…

In a way, I sort of feel bad for Mace, but not entirely. This turn of events kind of makes the Jason O’Mara character a sympathetic one due to the incredible amount of pressure he’d have to be under posing as an inhuman. However, he did willingly sign up for the job, and for noble reasons. It did make me enthusiastic to hear him say he believes inhumans should have equal treatment. Certainly an undertone for the many issues we face in society today. Him saying that pretty much confirms he’s a genuine good guy. So they better not try to make him a turncoat later. He is good at his job; giving speeches, facing the press. Which is why I’m glad Coulson asked him to stay on as director for symbolic and political purposes. But more so did I love that when it came to field operations, Coulson made it clear he was calling the shots for now on. 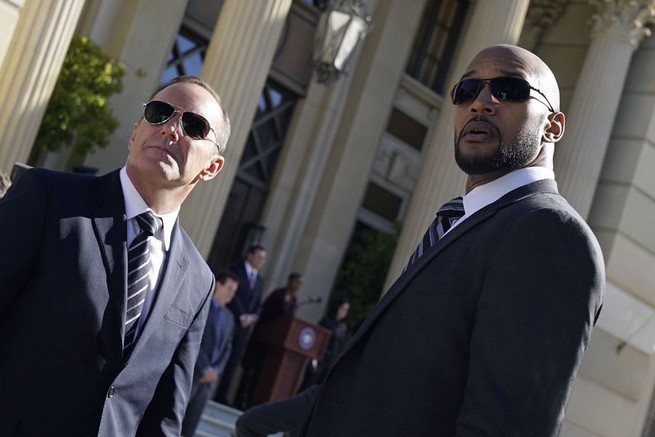 I think revealing Mace’s character as a facade comes at an interesting time given the conflict with Senator Nadeer and the Watchdogs. This will present some interesting challenges for Mace as the face of S.H.I.E.L.D. now that he carries the knowledge that his secret is out among his team. How will he handle future debates or confrontations with Nadeer? I’m kind of thinking Nadeer will find out he’s a fraud if she doesn’t already know. His famed Vienna rescue has always been in question, so there may be evidence, such as video, showing the truth about what really happened on that day.

The loss of Mace’s powers is what made this episode quite exciting. Knowing their boss wasn’t going to protect them from immediate dangers, Coulson and Mack had to rely on their own set of skills to fight off Hydra soldiers. Mack even had to use a small hatchet as a substitute to his axe. Coulson was able to use his built in wrist shield to protect Mace from getting shot. That’s always awesome to see. O’Mara deserves plenty of credit for his performance, one that allowed Mace to be quite vulnerable without his superhuman strength. To me, he didn’t play it as helpless, but rather ashamed.

Apparently Radcliffe isn’t necessarily evil. He still very much wants to get his hands on the Darkhold to gain infinite power and knowledge, but he wants to limit the amount of casualties. It also seems he wants to make May’s capture as comfortable as possible, just as long as she doesn’t break free of her restraints. This makes me think Aida will eventually see her creator as weak and unwilling to cross the line to get the Darkhold. 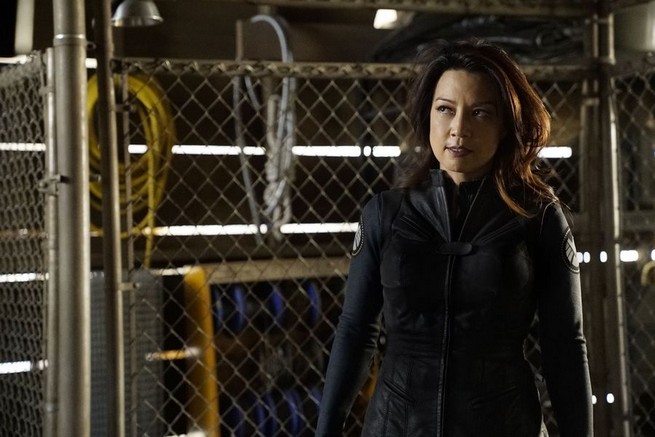 Although last week’s episode made it pretty clear May’s decoy is not aware of it being an L.M.D., it was nice that Radcliffe confirmed he didn’t program her to be self aware. Well, after continuing to think something’s off with herself then getting sliced with a blade, the May decoy is pretty well aware of what she is after seeing mechanical parts inside her body. I’d like to see the May decoy confront Radcliffe, and possibly get into a robot fight with Aida 2.0, but the decoy is probably going to do or say something to tip off either Radcliffe or Aida, and they’re probably going to override her programming. Either way, I feel the final scene has set us up for something really exciting.

Then we have Fitz investigating what went wrong with Aida and how to fix her. Why, Fitz, why? No doubt Radcliffe’s plea to keep the L.M.D. program going got to Fitz, but considering the attack with Aida, and how it affected everyone at the base, it almost seems like a dumb move. Not to mention, he’ll have to keep more secrets from Simmons, which puts their relationship at risk, as well as their lives. I’m sure the writers have some interesting developments on the way, so I’m not too concerned with being disappointed with this issue, but I am concerned about being heartbroken.

I am very pleased with the pace of this L.M.D. arc so far. This episode did a great job with balancing out the reveal of Mace’s true non-inhuman self and moving forward with Radcliffe’s plans for getting the Darkhold. Overall, this episode had a great amount of action, even though it came mostly from the second half. There was a fine amount of gunplay, and the fight sequences were really good. Given this episode was directed by Mortal Kombat Legacy‘s Kevin Tancharoen, who’s done plenty of good work on this show before, it’s not surprising, but it’s sure appreciated. Also, not surprising, the dialogue was witty as always, especially Talbot’s constant raving and ranting. I was cracking up on how uncomfortable Daisy looked as Mace was singing her praises at the press conference in the opening scene. And Simmons’ “Godfather” interrogation tactic was clever. Each development was very well played, and the momentum of the series continues to move along at very satisfying pace.