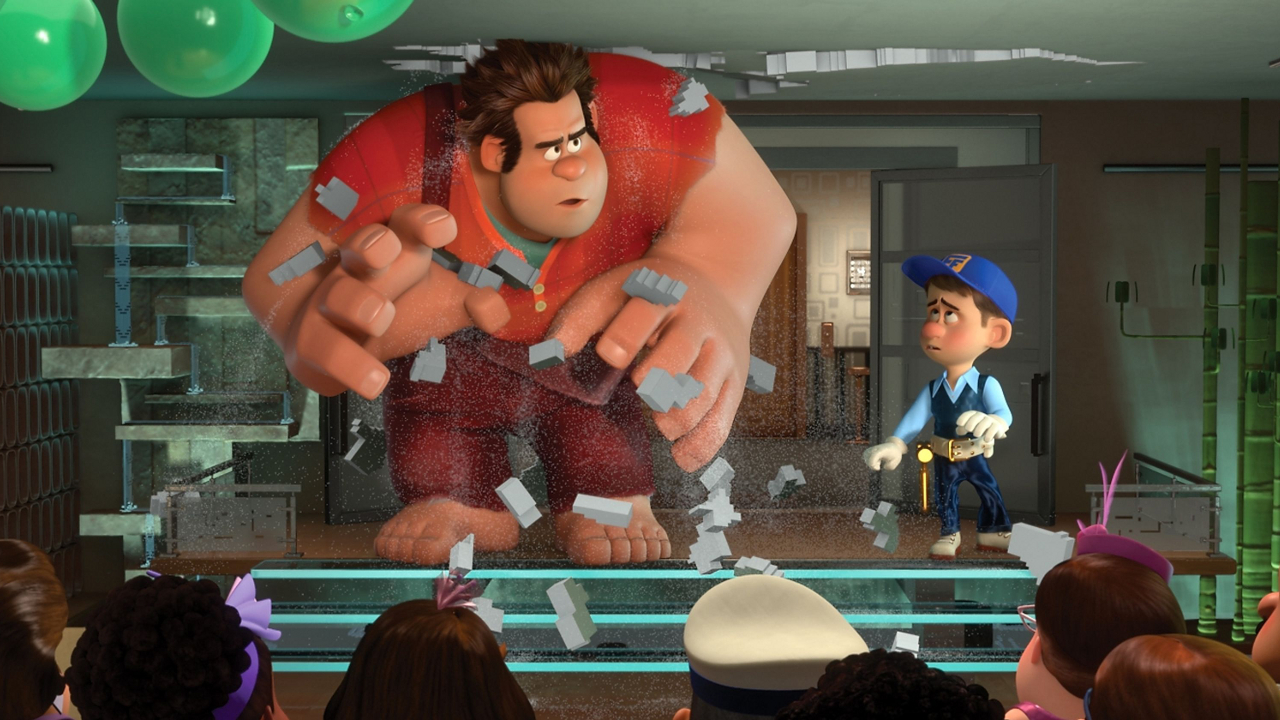 Whether you were raised on Mario, Link and Pac-Man or plug away nowadays at Fortnite, Red Dead Redemption 2 or Call of Duty, gaming has undeniably shaped your life as an influential escape. Despite a significant presence in pop culture, video game adaptations tend to struggle with creative hang-ups. Back in 2012, Disney defied those odds, holding true to its branded charm and heart resonating in its 52nd animated feature, Wreck-It Ralph.

Not based on any specific game in particular, Wreck-It Ralph chooses to pay homage to the medium as a whole. Opening in the 8-bit arcade world of Fix-It Felix Jr. (a Mario and Donkey Kong knock-off from the 1980s), the cast of characters play out their programmed scenario. Bulky bad guy Ralph (voiced by John C. Reilly) wrecks a lone apartment building, springing Goody two-shoes repairman Fix-It Felix Jr into action with his trusty golden hammer. After 30 years of countless hours of repeated gameplay, Ralph is fed up by the lack of respect and ostracization within in game. His frustration sets him on a personal mission to win a medal outside his retro workplace.

Wreck-It Ralph boldly treats the world of video games how Pixar’s Toy Story treated toys back in 1995. As humans, we only perceive toys and video games as inanimate or just code. Without a Toy Story or Wreck-It Ralph, there’s no existential thought process. For characters like Ralph, it’s more than just matching the actions of the controller. Just because the game demands bad guy actions, doesn’t mean they’re real-life villains. It’s nothing short of acting, yet various video game characters fail to separate fantasy from reality. In the candy-coated go-kart game, Sugar Rush, Vanellope (voiced by Sarah Silverman) is likewise treated by her fellow racers as an outcast due to her glitchy coding.

While Wreck-It Ralph speaks to the gamer in all of us, its core is centered around friendship and heroism found in the most unexpected places. Disney’s charms go beyond the ordinary princess fare into the modernly-accessible gaming world. Ralph’s ventures into Sugar Rush aren’t as sweet as the gimmicky game is portrayed either. Even his first encounter with Vanellope is prickly as she toys with him over the medal he won in first-person shooter, Hero’s Duty. But once the two outcasts grow more acquainted, sharing similar experiences, the friendship blossoms in vintage Disney fashion. Thanks to heartwarming chemistry between Reilly and Silverman, there is ample investment with these characters as they pinpoint their greater purpose within the gaming world. Jack McBrayer and Jane Lynch serve the narrative well as Fix-It Felix and Hero’s Duty’s Calhoun set out on their own side mission within the sugary game.

Director Rich Moore and screenwriters Phil Johnston and Jennifer Lee are fully aware how to balance heart with eye-popping gaming moments. There are plenty of moments when Wreck-It Ralph will tug at your heartstrings, while other moments are played out for chuckles or inside gaming jokes. Though the various cameos play more to respect than at the wallets. From Q*bert, Bowser and Sonic the Hedgehog to Street Fighter II and Dance Dance Revolution, references are littered throughout, triggering in the inner gamer from any age. And that’s what will universally bond the various gaming generations together. The world-building as a whole functions in clever ways. Who knew a literal surge protector could act as a gateway between game or the center of Pac-Man would house bad guy therapy session.

Wreck-It Ralph was a unique opportunity for Disney’s latest Renaissance. In 2012, the studio concentrated heavily on its princess line with The Princess and the Frog and Tangled. Even after the release of Wreck-It Ralph, Frozen and Moana claimed the forefront of Disney’s animated line. While those are enjoyable in their own right, it’s good to see Disney aiming in fresh directions. With its sequel Ralph Breaks the Internet due out this Thanksgiving, that world is only getting bigger as we speak. 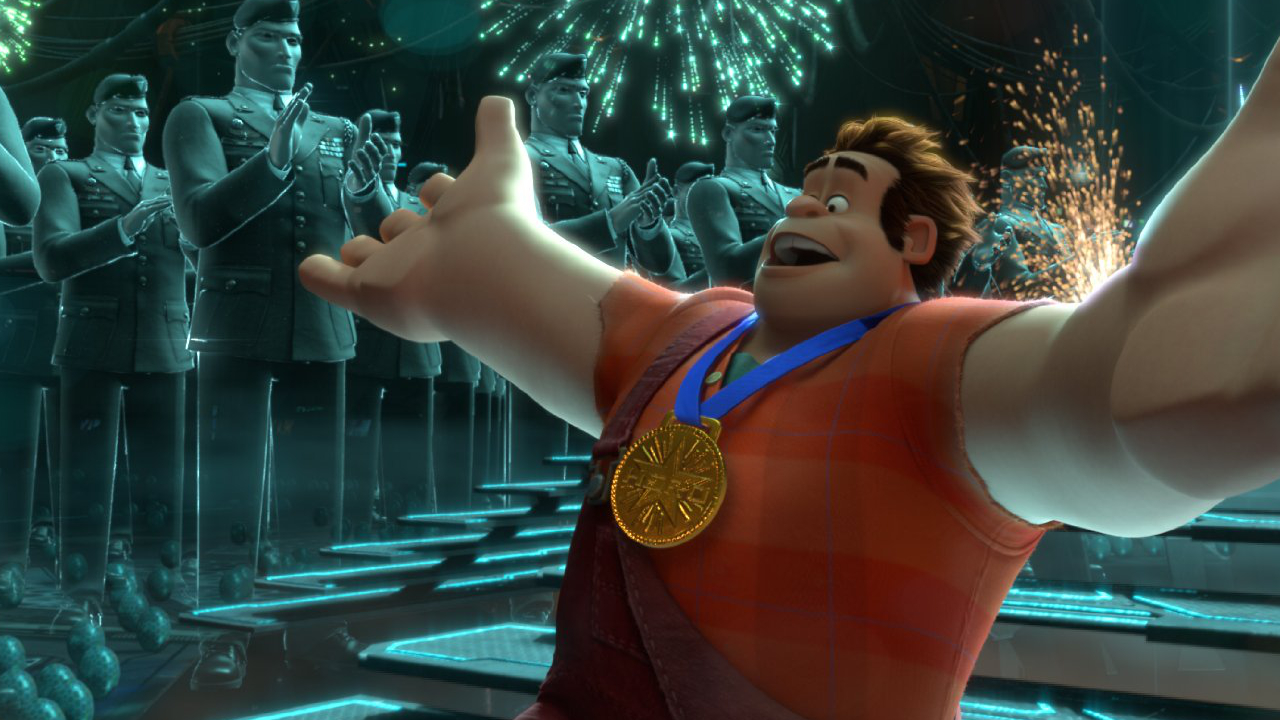 With The Incredibles this past June, Buena Vista Home Entertainment is working their way back through Disney’s animated library of the past 15 years. Wreck-It Ralph emerges as the studio’s best animated catalog title so far. The 4K UHD disc is superior than the 2013 Blu-ray release (also part of this combo pack), highlighting what HDR can truly do. The previously-released Blu-ray disc was already near reference quality, so any improvement would be wowing. The lengthy stay in Sugar Rush pops out the most in comparison to Felix It Felix Jr. and Hero’s Duty. Colors are incredibly vibrant, staying truer to accuracy. Ralph and Vanellope’s clothes are more detailed than they have ever been, adding to the realism. Even off of an upscale, Wreck-It Ralph has never looked better.

The 4K UHD copy of Wreck-It Ralph offers various audio options for its home media viewers. That includes: English Dolby Atmos and 2.0 Descriptive Audio, Spanish and French 5.1 Dolby Digital Plus Language tracks. Without the 7.1 Dolby track on the 4K disc like other Disney releases, Atmos seems to be the priority here. The Blu-ray disc offers options of English 7.1 DTS-HDMA and 2.0 Descriptive Audio as well as both Spanish and French 5.1 Dolby Digital Language tracks. Wreck-It Ralph is a film that requires its audio to be utilized to the fullest extent. For the most part, the 4K disc lives up to that. Whether it be the noises coming from an 8-bit arcade game or revving of the candy-coated go karts in Sugar Rush, you feel right in the middle of the world. Volume can played with a little bit when it comes to dialogue, but remains a clear and coherent track.

As a catalog title, Buena Vista offers no supplements on the 4K UHD disc. However, the bonus material from the 2013 Blu-ray disc are carried over once again. The Blu-ray disc offers: Paperman – Theatrical Short, Bit by Bit: Creating the World of Wreck-It Ralph and Disney Intermission: The Gamer’s Guide to Wreck-It Ralph. There are also alternate and deleted scenes as well as video game commercials. Released just in time for Ralph Breaks the Internet, there are no supplements hinting at the sequel. This is simply a carryover of the previous release.

4K UHD Review: Disney’s ‘Wreck-It Ralph’ Levels Up with Gamers of All Generations