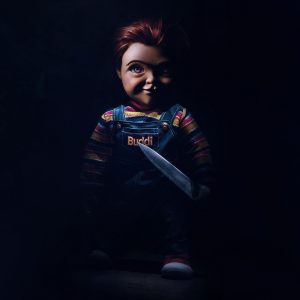 Child’s Play is the Never Say Never Again of Chucky movies. It is the rare occurrence of a remake produced while the original franchise is still ongoing. Like Kevin McClory and Thunderball, the company who sold the Child’s Play franchise still owned the rights to the first movie, and only the first movie. In these situations, it would be fascinating if the remake turned out to be a worthwhile interpretation on the franchise, perhaps even spawning a tangential franchise of its own. Child’s Play is only about as good as Never Say Never Again and it is definitely #notmyChucky.”

Andy (Gabriel Bateman) is 12 now and his mother Karen (Aubrey Plaza) works at Zed Mart. The Kaslan company’s Buddi doll isn’t exactly the hot toy that Good Guy dolls were in the ‘80s. Buddi is ubiquitous, thanks to Kaslan integrating it with all of its cloud technology, but there’s already a Buddi 2 coming out. Whereas Andy’s mom had to buy a black market Good Guy for her son in the ‘80s, people are returning old Buddis so they can upgrade to the new one. So Karen takes a returned Buddi doll home as a joke to enjoy ironically with her son, because they are both sarcastic millennials now. 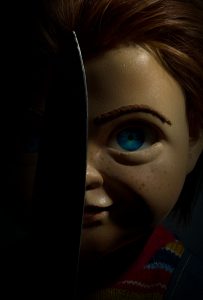 Here’s why Andy’s Buddi is broken. A sweat shop assembly line worker in Vietnam deleted all of its safety protocols as a final FU to the factory. Why is deleting safety protocols even a function on assembly line computers? Why would even the top Kaslan executive have the option to delete safety protocols? They should be on permanent lock. What positive reason would one ever have to remove safety from a consumer product?

That’s indicative of how Child’s Play botches this update. It seems like they wanted to adapt Chucky to modern smart technology, but their update just ends up being derivative of Terminator 2. They only updated the 1988 original by three whole years. 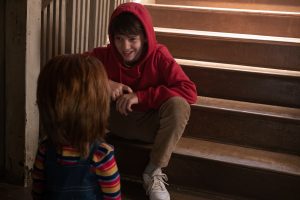 Chucky names himself Chucky in a cute riff about the way Siri and Alexa never understand what you say to them. He is following his programming to be Andy’s best friend and make him happy, but without safety protocols he won’t stop at animal torture or murder. Andy tries to teach Chucky why animal abuse is wrong, like John Connor making the terminator swear not to kill anyone, so the horror isn’t that Chucky is evil. Just that he’s a broken Echo Dot.

There is a certain sweetness about a broken toy sincerely trying to help. Mark Hamill imbues the voice with a childlike sincerity on which the film never capitalizes. Because all the film is interested in is gory kills. Gory kills are fine and can be fun, but if your thesis is that devices designed to help us can spell our destruction, Jesus, you’ve got to have at least as much to say about it as all the sci-fi films that came before. Literally the depth of Child’s Play’s theme is one of Andy’s friends jokes about how the robot holocaust starts.

There is some absurd humor in some of Chucky’s murders. When Andy wakes up to one of his enemy’s faces sitting on his dresser, that’s pretty funny. Even funnier when his friends try to hide it. A murder by lawnmower scene is like the steamroller scene in Austin Powers, very slowly pursuing its victim, although to be fair Child’s Play does hobble him to render him stuck in the mower’s path. He can still roll out of the way though. The absurdly comic moments may have just been a lucky fluke, because the rest of the film doesn’t seem to understand the tone of its macabre comedy. 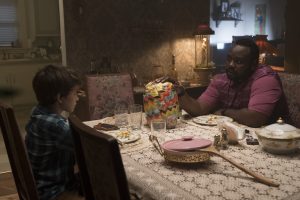 When the finale sprays a little girl in a toy store with blood, I get how the filmmakers though they were being funny and subversive, but it’s just gratuitous for the sake of gratuitous. They have nothing else to offer so they break taboos. I don’t care about the taboo. I’m insulted by the lack of imagination. Chucky also put that murdered face on a watermelon, and Andy ends up giving it to his black neighbor. On top of the severed face, that’s so racist! 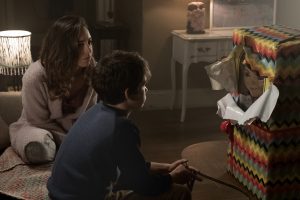 I had hoped Child’s Play would give Plaza a chance to stretch and show she could play a loving, nurturing mother. She does, but she also still does the Aubrey Plaza sarcastic schtick, especially in the beginning when she blackmails a colleague with dirt she has on him. The whole idea of playing with a doll ironically seems like it will become dated much faster than anything from the 1988 movie.

It does seem particularly mean to call this Chucky a Buddi. Buddy was the original name for the Good Guy dolls but they had to change it when the real My Buddy doll came out in the ‘80s. There are plenty of technopuns you could make with a lower case I. If you’re making a remake to compete with the creators of an ongoing franchise, don’t steal their discarded ideas too. And if they really didn’t know, do the research. You owe fans of Child’s Play that much.

Fortunately, the real Chucky (Brad Dourif) is still going strong. He’ll get his own Syfy TV series with the original creators involved. James Bond survived Never Say Never Again and so will Chucky.