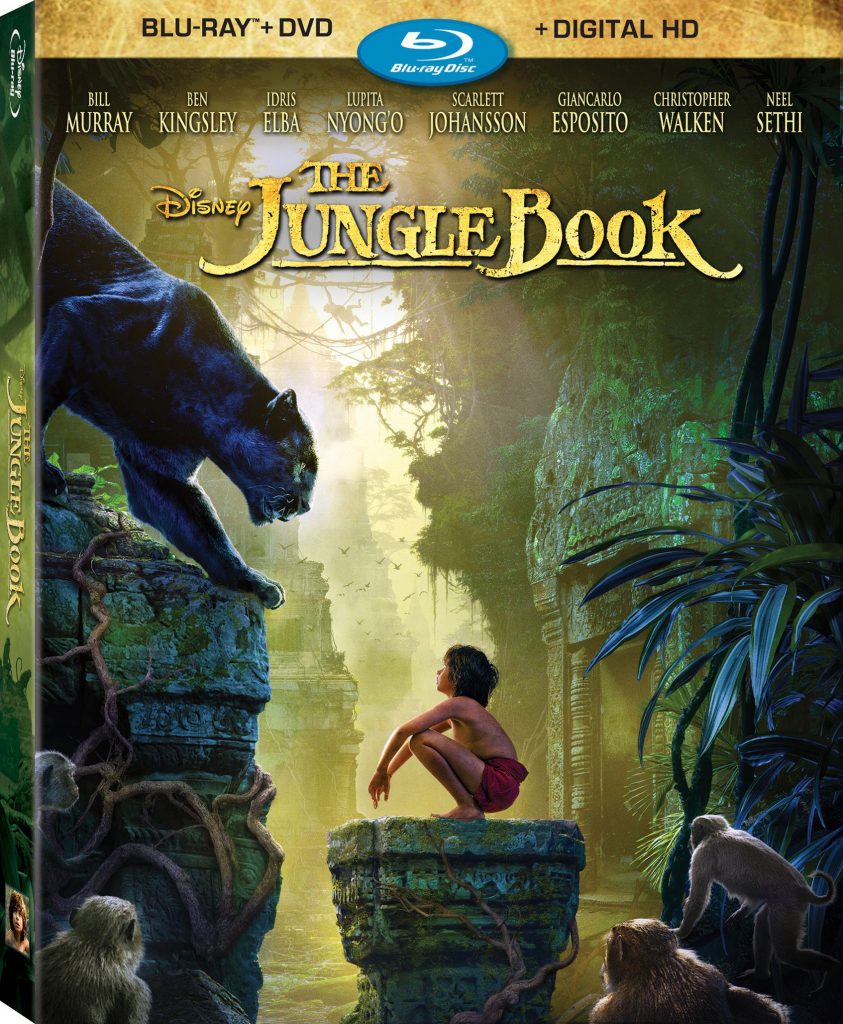 Rudyard Kipling’s The Jungle Book was first published in 1894, and has seen various film adaptations over the years, perhaps most famously in Disney’s beloved 1967 animated entry that we all grew up with. When I first sat down to watch Jon Favreau’s 2016 live-action version, I went in with rather low expectations, primarily because here we were, yet again, with another remake/reimagining/reboot…call it what you will. So imagine my surprise when 2016’s The Jungle Book turned out to be a charming, heartbreaking, and funny adventure with a great performance from young Neel Sethi (Mowgli) and delightful turns from a myriad of recognizable voice talent.

This 2016 version tells the classic tale of Mowgli, a “man-cub” who is raised by wolves in the jungle. With the wisdom and guidance of the panther Bagheera (Ben Kingsley), Mowgli is considered one of the pack, gleefully playing and learning alongside his wolf peers, as long as he refrains from using his human “tricks” in this animal kingdom. When the worst drought in ages descends upon the jungle, all of the animals agree to follow the “code” that they will live in harmony and be able to peacefully drink from the lone water hole without the threat of predatory action. That is, except for the menacing tiger known as Sheer Khan (Idris Elba), whose personal history with mankind has left him scarred and burned. He has no intentions of allowing Mowgli to grow up in the jungle and become the very type of man who left him disfigured. Faced with the difficult decision of either staying in the jungle and putting his wolf family in harms way or leaving and finding his human counterparts in a nearby village, young Mowgli sets off on a journey of self-discovery. Along the way, he meets a plethora of colorful characters including Baloo the bear (Bill Murray), a friend who teaches him all about the “bare necessities” of life…but with Sheer Khan on the prowl back home, can Mowgli summon the courage to protect those who he holds most dear?

As a parent of three, I end up watching a lot of family friendly films in the theater and at home, and though I’ll watch just about anything my kids are interested in, there are those children’s movies that can truly be enjoyed by all (just about any Pixar movie) and some that are strictly for the kids. I’m happy to report that The Jungle Book was a delight to watch for all of us! I was especially impressed by the range of voice talent involved, most notably, Bill Murray’s hilarious turn as Baloo (talk about a casting hole-in-one) and Idris Elba as Sheer Khan, who offers up a terrifying antagonist for young Mowgli with his deep baritone menace. I usually like to include at least a couple of concerns or issues I find with a film, but I found myself pleasantly surprised at how much fun The Jungle Book turned out to be, and I highly recommend picking up this latest Blu-Ray release to enjoy at home with the family.

Walt Disney Home Entertainment is known for it’s fantastic video quality on their Blu-Ray releases, and The Jungle Book is no exception. The picture quality is simply stunning to behold, with the vibrant colors of the jungle on full display in 1080P. Everything from movement of single strands of hair on Baloo’s body to the seemingly tangible scales on Kaa’s slithery back are impressively detailed and a wonder to behold. The bigger the screen, the more noticeable the clarity becomes. Even the black levels at night are appropriate inky and faithful to the theatrical print. This is a beautiful digital image that will absolutely please fans of the film!

The included 7.1 DTS HD mix is one of the absolute best audio tracks of the year thus far! My family was completely immersed in the audio experience at home with dialogue, sound effects, and the score coming through crystal clear. The dynamics at play are truly impressive, as both the low and the high end of the spectrum are masterfully utilized for home theater viewing. From the chase scenes throughout the jungle to the powerful climactic battle atop the trees, this is one amazing track that will certainly be demo-disc material for audiophiles everywhere.

Walt Disney Home Entertainment has given The Jungle Book a surprisingly limited selection of bonus features. Given their past treatment of “big name” films in the Disney catalog, I was surprised at the lack of special features to accompany this release. With that being said, fans of the film will certainly appreciate the features that are provided, as they give some insight into the making of the film and the commentary from Director Jon Favreau is especially engaging. Here’s a list of what’s included:

This Blu-Ray release from Disney features a very nice and colorful slipcover with an embossed title and jungle features (mostly the temple ruins, Mowgli, and Bagheera). The look of the original theatrical poster works quite well here, but it sure does make Bagheera look somewhat menacing, which, having seen the film, he clearly isn’t….but I digress. On the reverse of the slipcover you’ll find a short plot synopsis for the film, a list of bonus content, and technical specifications. Inside of the case is the Blu-Ray disc, DVD disc, a Disney Movie Club promotional code, and a sealed digital copy for the film. Given the success of the film and the lack of significant bonus content…I smell a “double dip” Collector’s Edition in the near future, so be warned.

Jon Favreau’s 2016 version of The Jungle Book is a charming, heartbreaking, and funny adventure with great performances from young Neel Sethi and the myriad of recognizable voice talent. I’m generally not a big fan of the endless slate of reboots and reimagining’s, but this one is a winner for the whole family! This Blu-Ray release from Walt Disney Home Entertainment features stellar picture quality and a demo-disc worthy 7.1. HD audio track, but is somewhat limited on bonus content, so don’t be surprised if there’s a “double-dip” collector’s edition on the horizon. Nevertheless, I highly recommend this delightful and endlessly watchable live-action version of The Jungle Book, which certainly earns a spot on our “bare necessities” home video must-haves.