Three people wanted to be my plus one for the screening of Marvel’s The Avengers. I had to pick from my son, my grandson and my significant other. Since the screening fell (as usual) on a school night, I eliminated my little guy, promising to take him at the weekend, and my son rarely asks to go, so he won out, much to the chagrin of the others. I will eagerly attend with my grandson later this week, because I loved the film, and so did my son. Pack with action, and exciting special effects and an exceptional cast, The Avengers offers an excellent beginning to blockbuster season.

Except with Johansson, Ruffalo and Renner, we’ve met a few of the Avengers in a BIG way, and the new or lesser known members move effortlessly into their HUGE roles – Ruffalo  as the mild mannered Bruce Banner, whose inner demons turn him into the mean, green Hulk and Renner, who I will sing praises for, pleases as Hawkeye (briefly seen in Thor), a man with a dark past and a penchant for hitting his mark with lethal arrows, and finally, Johansson (seen in Ironman 2), who as the Black Widow, plays a quality female superhero – not a stiletto and bra sporting sex object. Her past too is a sorted and dark and her name speaks volumes. In fact, I like all in their respective roles. The others, whose personalities rock, please as well. Arrogant Stark, “awe shucks” Captain America and thunderous Thor deliver excellently. Together the entire team, thanks to obvious personal chemistry, first rate, witty writing and delightful adlibbing, makes for full on laugh out loud entertainment and thrill-a-minute excitement.

As noted, the film stuns visually. Joss Whedon obviously has a knack for this genre and his talented special effects department makes- the 3D aspect perfect, and I typically frown on 3D, but here I didn’t mind at all – it’s all delightful eye-candy – stars and special effects. Speaking of 3D, at the screening film reps gave us choices of glasses – from several, each representing one of the Avengers – after the film, I snagged a set for my grandson, who was thrilled. He, however, is still bent out of shape because his dad got to attend the screening and not him, but a school night, is a school night (Mom is firm on that!).

One of the things that really pleases me about the film lies in the battling and equally intense verbal banter between the heroes – each with an intriguing past and a personal axe to grind – with self, humanity and others. They challenge each other, mainly verbally (and often – to the audience’s delight physically) at every turn and it is great fun – witty, cleaver and quippy and downright intensely exciting. I left the theatre completely satisfied and eager to write my review, for a film to which I am giving a solid A+. I am seeing it again on opening day – have to for my little guy and want to for the fun of it. Bravo to all cast and crew and to Stan Lee (who does appear) for creating these great characters! 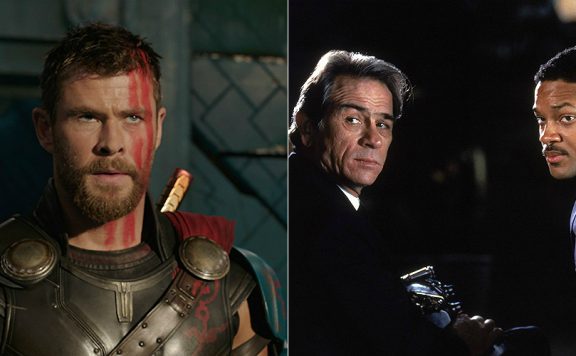 “The Avengers” – Review by Laurie Coker

Three people wanted to be my plus one for the screening of Marvel’s The Avengers. I had to pick from my son, my grandson and my significant other. Since the screening fell (as usual) on a school night, I eliminated my little guy, promising...
0
Average User Rating
0 votes
Please sign in to rate.