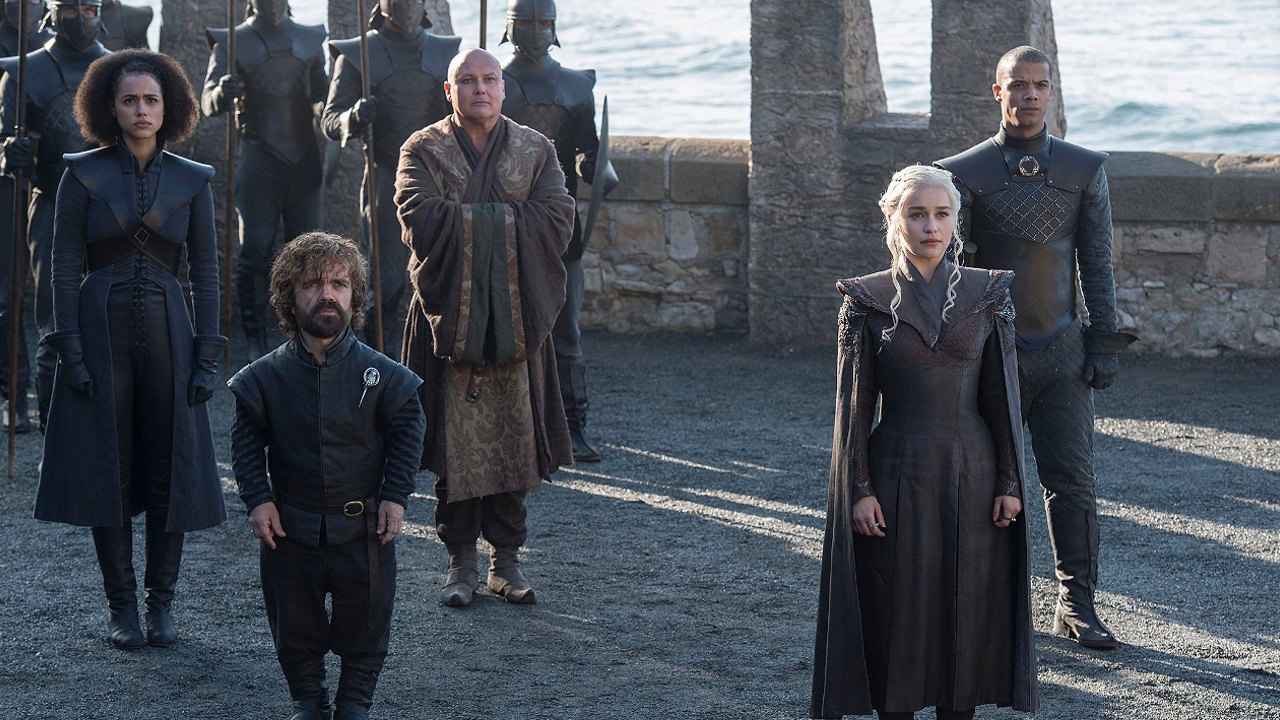 Last season’s epic finale, The Winds of Winter positioned many of its chess pieces one step closer to the ultimate endgame. Jon Snow (Kit Harington) followed in his brother’s footsteps, named King of the North after Bastard Bowl 2016. While Cersei (Lena Headey) no longer plays second fiddle in King’s Landing, claiming the Iron Throne for herself. And dragon queen Dany (Emilia Clarke) is out with a vengeance, crossing the narrow sea with an unholy alliance of practically everybody else in Westeros and Essos. The Season 7 teaser boiled it down to a three-way war. However, the Season Premiere, Dragonstone just gets its feet wet on the subject as we’ve endured the longest wait for a season yet.

When Dragonstone opens, it already feels like Season 7 is replaying the same situations we witnessed in the Season Finale. We’re back at The Twins and Walder Frey’s (David Bradley) is still alive, toasting his banner men. Wait a second. Didn’t Arya (Maisie Williams) get her revenge last season on the man responsible for killing her mother and brother? Maybe it’s an alternate take of what went down with the Freys? Frey chastises his men for not killing all the Starks, despite taking out the Robb and Catelyn at Red Wedding. The job wasn’t done. If you listen closely, Frey never mentions which Starks are left. We as the audience know that Jon, Sansa, Arya and Bran are still out there. As Frey stands, his men are poisoned on the wine. Arya, removing her Walder Frey mask, not only wiped out the old man, but all of House Frey. That’s just a small, exciting taste of what to expect from Arya this episode.

Up North, Bran (Isaac Hempstead Wright) has a vision of the White Walker marching through the cold winter. While he and Meera (Ellie Kendrick) continues to elude the icy villains, there’s no doubt that the gap between the two will only get smaller. Making record time it seems, Bran and Meera reach the Wall. Dolorous Edd (Ben Crompton) takes them for Wildlings and is skeptical that Bran is who he says he is. Once Bran lays down some important information, all doubt is gone. We know that the Starks are reuniting much sooner than later. Bran’s at the Wall and Jon and Sansa (Sophie Turner) are at Winterfell. It’s only been six years since Bran’s seen his family. The question is how many more episodes do we have to wait until it pays off. One? Two?

But now that we’re in Winterfell, Jon’s working to get the North back together. That even making amends with House Karstark and House Umber, whose young heirs he doesn’t blame for their family’s betrayal earlier on in the series. Yes, it’s important to get everyone on the same page, but it more-so sets up the rivalry between Jon and Sansa. Sansa has no problems questioning Jon’s decisions in front of the council. Even the sassy Lyanna Mormont (Bella Ramsey), who’s still a scene-stealer, has to watch front and center as the “siblings” bicker. Sansa say she can’t stand to side while Jon makes stupid mistakes like her father and brother. But with Littlefinger (Aidan Gillen) in her ear, there’s much more going on. Going into Season 7, we had this inkling that not everything would be smoothed over after Jon was proclaimed “King of the North.” More seeds have been dropped.

At King’s Landing, Cersei managed to secure the Iron Throne after the death of her son, but she might be on borrowed time. With enemies on all fronts, it appears to be a short victory for House Lannister. Since last season, Cersei is well-aware of what’s going on during an exposition scene with her brother Jaime (Nikolaj Coster-Waldau) in a map room. If you forgot the political climate at the end of Season 6, don’t worry. Here’s a quick refresher course. As expected through much speculation, Cersei has new ally in Euron Greyjoy (Pilou Asbæk), who’s quickly out to marry her. Predictable. But she refuses, calling him untrustworthy. I wonder why. You kill your brother, almost kill your niece and nephew. That’s a real trustworthy ally. Despite a faster season, it’s refreshing to see some plot lines breathe a bit more. To gain Cersei’s trust, Euron set out to find a powerful gift. And while it’s not spelled out, you can rest assure that it’s that rumored horn to control the dragons.

We also spend a bit of time in Oldtown. Sam (John Bradley) continues his training at the Citadel, hoping to become a Maester. But it’s more about finding information to defeat the White Walkers. The Maesters there are skeptical, except for Archmaester Marwyn (Jim Broadbent). Marwyn believes that Sam is telling the truth, but assures him that the Wall will protect them. Uh, that wall is coming down much sooner that you think. Everyone seriously needs to quit squabbling about the political landscape and focus on the real matter at hand. Poor Sam lives out his days in a rinse and repeat montage. There’s a bit of odd humor as it repetition speeds up. But like the rest of Dragonstone, we’re not ready for any fulfillment yet. It’s just about laying the groundwork.

In the Riverlands, The Hound (Rory McCann) and The Brotherhood Without Banners take shelter in a familiar home. There’s plenty of faith-based questions to ponder. Why keep getting resurrected over and over again. What is your purpose. End the skeptical Hound is starting to believes as Thoros of Myr (Paul Kaye) asks him to look into the fire. We all know the Hound is afraid of fire, so there’s a bit of tension how this would play out. Nothing major except that the Hound witnessed a vision beyond the Wall. Don’t be surprised if they head up North fairly soon.

After the slaughter at the Twins, we return to Arya coming across Lannister soldiers. For being the enemy, their rather friendly to her. And if you listen to song they’re singing and see who one of the soldier is, it’s none of than Ed Sheeran. I knew both he and Jim Broadbent were part of Season 7, but wasn’t expecting him in Dragonstone. Shockingly enough, the voice alone singing was the first clue it was Sheeran. Though we don’t know his fate after Arya told them she was going to King’s Landing to kill Cersei. They laugh it off. But “the list” lives on.

With the episode titled Dragonstone, it was almost fitting for it to end with Dany and her followers. Even if you don’t like Dany as a character and believe me I don’t, it was a triumph to see her come home. The set is beautiful and even when Stannis held command here, I don’t recall any day shots. Even fitting is there’s no dialogue. Dany goes from the beach, up the Great Wall of China practically and into the throne room. We think it’s going to end here. No, we wind up in the map room we’ve seen many times before and Dany’s ready to take charge with one simple line.

Dragonstone is a fitting start to Season 7, not out to break the wheel of season premieres. Outside of the curve ball opening, we knew how and where things would play out. Expect the rest of the season to pick up a bit faster, especially with fewer episodes. Next week’s Stormborn seems to be doing that.