The final episodes of NBC’s The Carmichael Show air tonight. Amber Stevens West is now on the new fall show Ghosted on Fox, so I met her at the Fox TCA party last night where she filled me in on the last two Carmichael Shows, “Three Year Anniversary” and “Gold Diggers.” 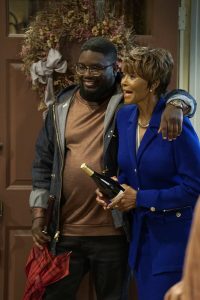 The Carmichael Show tackled hot button topics like rape, gun control and euthanasia in its three seasons. Discussions would usually unfold between Jerrod and Maxine and Jerrod’s parents (Loretta Devine and David Alan Grier), brother Bobby and Bobby’s ex Nekeisha (Tiffany Haddish). Even though they hoped to get renewed, West feels these two episodes give fans a fitting farewell to The Carmichael Show.

“I think for people who have been watching since the beginning, to have a throughline of the relationships that we all have with each other, to have an answer to some questions, I think those will be answered,” West said. “So I think people will be happy with that. At the same time, The Carmichael Show I think could have gone on forever. It’s a show that was just about conversation and there’s always plenty to talk about. So we could’ve kept going but it still will feel like there’s a little bit of a button on the end.” 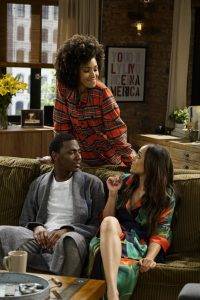 The last day of filming was emotional, even as a normal season finale would be. “We didn’t know if we were going to come back or not,” West said. “We treated it like a season wrap. We had a wrap party that was amazing, best wrap party I’ve ever been to. Everyone really loved each other at that show and so we all just celebrated how much fun we had had all season and got turnt up and it was amazing. My last day on set was bittersweet. I was really proud of what we’d been doing but I was sad that it was coming to an end. I was unsure of whether or not we were going to have more. Loretta came to the set and hugged Jerrod and started crying. She was showing what all of us felt like. We all genuinely enjoy each other. It was kind of a sad day but we’re proud of the work we did.”

Even though everyone in the cast has moved on, they still keep in touch every day. “We’re all on a group text chain, every single one of them,” West said. “We were texting this morning. We’re all in contact all the time, very supportive of one another. Everyone’s working on something exciting so there’s always a congratulatory text of the day, just talking about when’s the next time we can all get together. Everyone’s all over the place. ‘Rel is making a movie in Atlanta and Tiffany’s shooting a TV show in New York. Jerrod’s making a movie, David’s doing his game show and Loretta’s up in Vancouver shooting and I’m here. We’re all anticipating the next time we can all be together.”

TCA Exclusive: Amber Stevens West On The Final Episodes Of The Carmichael Show