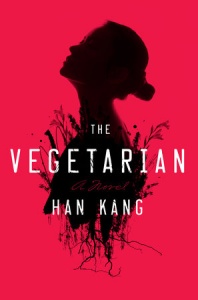 The Vegetarian by Han Kang, recently translated to English from its original Korean, has generated much discussion for its unique structure, visceral writing, and disturbing imagery. The novella, presented in three parts, takes place in Seoul in the early 2000s and follows a roughly two-year span in which the main character, Yeong-hye, makes a seemingly harmless decision which sets into motion a series of life-altering events.

Each of the three sections is narrated by a different person in Yeong-hye’s life. Her husband, Mr. Cheong, narrates the first chapter (“The Vegetarian”), her brother-in-law, left unnamed, features in the second section (“Mongolian Mark”), while Yeong-hye’s sister, In-hye, concludes the story (“Flaming Trees”). Interestingly, Yeong-hye never narrates her own section, although excerpts of her dreams feature heavily throughout the first part.

The switch in narration from section to section initially disorients, but not for long, as each narrator’s distinct perspective on Yeong-hye’s vegetarianism compels greatly. Even though we as the reader can see into the minds of the three narrators, Yeong-hye seems to be the character with the firmest grasp on her desires and purpose. Everyone else struggles (and mostly succeeds at—with one notable exception) presenting a normal face to the world, but they are lost and confused internally.

On the surface level, the plot hinges on Yeong-hye’s decision to become a vegetarian, but a far deeper meaning runs throughout. It becomes clearer and clearer that in refusing to eat meat, Yeong-hye chooses to fight a cultural war. She becomes the black sheep of the family because she refuses to conform to societal standards. Her desire is the catalyst that leads to her family’s shame.

The perverse family and gender dynamics distress enormously, especially when Kang highlights marriage and sex. I often found myself so disgusted that I debated putting the book down, but couldn’t look away because the language was so captivating and I was deeply invested in Yeong-hye’s spiral into madness.

The most disappointing aspect of the novella rests in its ending. As much as I appreciate literary fiction, the conclusion was too esoteric for my taste. Symbolically, it makes sense, but I found that realistically, too many loose ends were left open. It was unfortunate that the novel ended on this note, as it soured my enjoyment significantly.

If you’re looking for a disquieting read with beautiful language, and you don’t shy away from heavy symbolism and subtle meaning, I’d definitely give Han Kang’s The Vegetarian a chance. It’s also a very short read, so even if you’re left dissatisfied, not much time is lost.

Tweet1
Share3
Pin
4 Shares
Summary
The Vegetarian is a disquieting read with beautiful language, but I'd be careful picking it up if you're not a fan of literary fiction.
6
Fair