Carol Movie Review by Ashley Menzel: A touching story of falling in love.

Carol starring Cate Blanchett and Rooney Mara is a film set in 1950s New York City. The film opens with Terese Belivet (Rooney Mara) and Carol Aird (Cate Blanchett) sitting at a restaurant and being interrupted by one of Terese’s friends and asks if she were joining them. Terese leaves and in the car, begins reflecting back on Carol and their initial meeting.

Terese works at a department store selling toys when Carol (Cate Blanchett) enters. Terese spots her from across the room, and Carol approaches her to buy a gift for her daughter for Christmas. Terese convinces Carol to buy her daughter a train set. There is a tension and fascination between the two characters that is conveyed solely by the emotion on their faces, which is incredible.

After Carol’s departure, Terese realizes that she had left her gloves on the counter and returns them via mail to Carol. Carol receives the gloves at her home when her husband, Harge (Kyle Chandler) enters with the rest of the mail. Her and Harge are divorcing and there is obvious and palpable tension between them. Through some subtle nuances, you suspect that it is because Carol has relationships with other women, a woman named Abbey in particular. 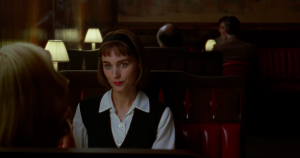 To thank Terese, Carol invites her to lunch, where they exchange pleasantries and Carol invites her to her house. There is a strong emotional connection between the two that is demonstrated through the intense gazes and truly captivating exchanges. Harge returns home while Carol and Terese are visiting and there is a heated exchange between them while Terese watches from the kitchen. Harge is there to pick up their daughter for Christmas and he is a few days early. Carol quickly packs up a bag for her daughter and sends her off to be with Harge and his family for Christmas.

Carol finds out that Harge is keeping her daughter from her and is seeking sole custody of her and is citing a morality clause as the reason. In an emotional moment, she decides to travel to Chicago with Terese for the holidays. Before the trip, she gifts a camera to Terese so that she can continue to develop as a photographer. They embark on a roadtrip from New York to Chicago and stop in many hotels and motels, all while tension builds between them, until one night they make love.

This is quickly spoiled the next day by Carol receiving a telegram from Harge telling her that she will never see her daughter again because he hired a man who had recorded the sound of Terese and Carol’s rendez-vous that night. Destroyed and distraught, Carol spends one more night with Terese and calls Abbey to retrieve Terese and drive her back to New York City. Terese is obviously broken and so lost. She receives the letter that Carol left for her and the letter tells her to move on and continue her life.

In a meeting with her lawyers and Harge’s lawyers, she tells Harge that he can have custody of their daughter but she wants visits. She will not deny that she wanted to be with Terese and that she will not apologize for it. 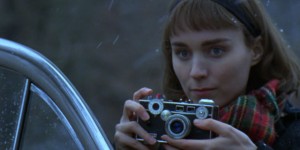 Terese has moved on with her life and gets a job at the New York Times being a photographer, until she receives a letter from Carol. It asks to meet at a restaurant in a hotel to speak with her. Terese toys with the idea and even throws out the letter but then decides to meet her. Carol invites Terese to live with her in her new apartment and to dinner later tonight with friends and Terese declines. This is where they were interrupted by Terese’s friend and she exits.

While at the party, Terese realizes her attraction to women and Carol and shows up at the Oakroom, the restaurant where Carol was eating dinner. There is a build up of tension and suspension as she makes her way across a crowded room and once again, their eyes meet and the movie comes to a close, with a nice little bookend.

What makes this film incredible is the acting and the cinematography. Rooney Mara has such a way with saying so much with her eyes and her mannerisms that many of the most intense and powerful scenes are those where little is actually said. Rooney Mara brings a beautiful innocence and doe-eyed mystique to her character. In contrast, Cate Blanchett, showing another beauty and elegance, also shows a broken and torn woman feeling pulled in every direction. She has a sense of worldliness to her and well as portraying someone who is perpetually trapped by her situation. She is struggling with her identity and how that fits into the world in which she lives.

The cinematography of this film is incredible. The entire film looks and feels as though it was shot in the 1950s. There is an interesting use of windows, frames, reflections and mirrors used in the film which I believe adds a level of self reflection to this film. It is essentially at its core, a love story that causes us to reflect on our own sense of love. It is a story about falling in love and how it makes you feel. Terese’s character is finding herself, who she is, what and who she loves, and constantly examining herself and her life when looking through the window or glass. She is seeing her world essentially framed and is completing her picture.

This film is a beautifully classic yet very modern coming of age story of love, acceptance and growth. With two incredible lead actresses and a beautifully written and shot story, this is sure to be an Oscar contender for 2015.