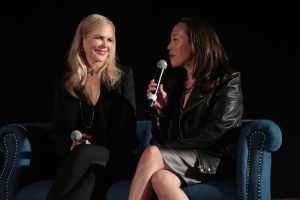 One of the new releases hitting theaters on Christmas Day is Destroyer. This is not a happy, feel good holiday movie, but ‘tis the season for intense dramatic fare too. Nicole Kidman plays Det. Erin Bell, tearing through the streets of L.A. to find Silas (Toby Kebbell), the drug dealer who got away on an old undercover mission.

No stranger to harrowing drama, Kusama made her debut directing Michelle Rodriguez in Girlfight and most recently the dinner party thriller The Invitation. Kusama spoke with WLE by phone while traveling to promote Destroyer this month.

WLE: Nicole Kidman is rightfully getting all the acclaim for her work in Destroyer but is it okay if I say I’m not surprised? Of course Nicole Kidman can play a grizzled cop. She’s Nicole Kidman!

KK: I mean, I don’t think she necessarily thought she could and in a funny way, I think I needed less convincing than she did. She was always really drawn to the character. I don’t know if she had felt entirely sure that she could do it but obviously she’s proven that she can. She just inhabits roles. I feel really lucky to have had the opportunity to work with her. She’s such a ferocious talent.

WLE: Was she interested in doing something more physical than she usually does, action-wise?

KK: I think what it was was that there was something in that central relationship with the daughter that just was really compelling to her on an emotional level. I think she was really ready to dive into something that demanding. She hadn’t played a front and center lead role in a while and I think she was really eager to own that territory and explore carrying a film. It was a tremendous weight on her shoulders but she pulled it off every day.

WLE: I noticed a The Nun billboard on Wilshire Blvd. That movie came out in September so did you shoot that fairly recently?

KK: Well, we shot it less than exactly a year ago. I think we started shooting right at the beginning of December, had a holiday break and then were shooting in some of January and into February. So yes, it seems like it would be recent.

WLE: That seems early for a Nun billboard. Were there pickups closer to the summer?

KK: Huh, that’s funny. No, there weren’t. I’m trying to figure out how that could have been. Maybe it was a coming soon type of poster.

WLE: Was playing with time as far as the flashbacks important to you in Destroyer? 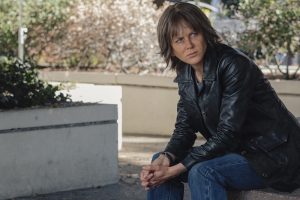 KK: It was. It was always in the script. Phil Hay and Matt Manfredi always wanted to be toggling between the past and the present and ideally feel like there was somewhat seamless movement between the two timeframes. Definitely the movie as a whole is working with this idea of patterns and circles. So that structural back and forth was baked into the script.

WLE: Did you ever play with it further in the edit?

KK: Oh yeah. It’s funny, there were a couple of key flashbacks that we experimented with moving earlier, moving later and a couple of things remained in their new spots and then some things we moved back. Once you’re in the cutting room, it’s almost like it’s the last phase of writing. We had to make a couple of fairly significant changes.

WLE: What’s one flashback that maybe came in a different place?

KK: I would say something like the flashback of Silas and his whole crew of people during that scene in which he taunts Arturo into playing Russian Roulette. That scene was always written a little bit closer to the middle of the film. We found the way to bring it up so that it comes in a little bit earlier and it gives the audience a little bit more of a sense of insight into how basically what Silas’s strength is, if you can call it that, because he’s certainly not a mastermind criminal. He’s just a psychological marksman. He’s very good at finding vulnerable people and we needed to see that I think a little bit earlier in the finished cut to connect the audience to everyone’s sense of fear around him.

WLE: It’s such a powerful introduction to Silas. I’m glad it is where it is.

KK: It’s funny. I resisted it for a long time and I was a little bit like oh, I just don’t know, there were other strengths that came by showing it later. But, funnily enough I think it was the right thing to do to hook people into why she’s going after this guy in the first place. He’s a bad guy. You want to see that he’s capable of being really pretty scary.

WLE: Destroyer is Nicole’s tour de force performance but everyone she meets is so memorable. Was it as intense for any of the other cast?

KK: You know, it’s so funny. I feel so lucky that we have some unknown faces and definitely a bunch of highly skilled, experienced actors in the mix with Nicole. It’s like everybody could just co-exist alongside her. Everybody was really, really good at, I want to say, being present and going as deep as she went. I never felt like she was abandoned on set. I always felt like she had the backup of really strong actors around her. I think everyone was actually just excited. So many people, particularly Sebastian Stan and Tatiana Maslany, they were just like, “I just want to get to work with her.” So that was an exciting thing to see that there was so much enthusiasm around working with an actor who’s at the height of their creative power.

WLE: Were there any difficulties Tatiana, Toby or Sebastian felt realizing their characters?

KK: I mean, I think each of them probably had certain questions or certain threads that they felt they needed to answer for themselves. I guess it would be a question for each of them individually if they felt it had come to fore. To me, I feel like I had a lot – – particularly the three you mentioned, they’re just such highly skilled actors, Sebastian, Tatiana and Toby, I think everybody took on the roles with a sense of relish. For instance, Bradley Whitford, I only worked with him for two days and yet I felt like he was so dialed into something about this kind of wealthy sleazebag. That was just so fun. Everybody showed up having done the work. Maybe there were questions later in the cutting room where it’s sort of like oh, do we need to pull out some of this information because it’s frankly just too much information. In terms of how they interpreted the roles, it felt pretty seamless.

WLE: We see Petra at two drastically different stages. How did you and Tatiana modulate what those stages were and what had come in between?

KK: That’s an interesting question. I think a big part of it was really thinking about what longterm serious drug abuse can do superficially to your body, your hair, your skin and then really more importantly to your mind. So she really started studying essentially the case histories of longterm drug users as a way to just understand the behavior, the kind of slight mania that comes with withdrawal and with just that state of basically, particularly for her, this is most likely a person who started dabbling in meth and then just became a tweaker. So I think for Tatiana that fall, from we’d always imagined she was this Beverly Hills rich girl who just fell in with a bad crowd and was always rebelling against her parents. By the time she was 19, was probably meeting somebody like Silas. When we first see her, there’s still some sort of trace of that Beverly Hills girl in her. By the time we see her 17 years later, she’s completely far gone.

WLE: I don’t have kids yet but I imagine any parent has this feeling when they know something’s bad for their kid and there’s just no way to convince their child before they go through it. Is that exacerbated even more when Erin Bell is a cop and she knows exactly the type of bad boy her daughter is hooking up with?

KK: Totally! That’s exactly what we were trying to convey was just a sense of she’s seen these situations before. She’s seen this kind of guy exactly before and it of course triggers her in so many ways to see this guy with her 16-year-old daughter. The thing we were working with in the movie as we were shooting was imagining that in some way, everyone she meets across this journey of the film, is sort of a mirror back to her. In the same ay she can look at Shelby and feel like Shelby is one of the more hopeful mirrors where there’s some chance for redemption, she looks at somebody like Jay or looks at somebody like Silas and feels like the worst part of herself is looking right back at her.

WLE: I think of the Greek tragedy Cassandra a lot. I get it now. We all can see the future to the extent that we know what is going to happen with certain people, and no one will believe us.

KK: Yeah, exactly. That’s so true. Cassandra’s one of my favorite of the Greek myths so that’s an awesome reference.

WLE: And yet I don’t think we judge Shelby because we understand how that’s exciting and rebellious for her, and how hopeful she is like she’s the first teenager who found a hot bad boy.

WLE: Was the title always Destroyer?

KK: It’s funny, there was a point at which it might have been called Echo Park because so much of it took place on the east side. But we had to change it because there was a film that came out as we were making it called Echo Park and so we decided let’s rethink. I have to say, Destroyer to me has a very powerful feeling.

WLE: Did Nicole do ride alongs with cops?

KK: Yes, she did and she did quite a bit of weapons training. That helped her I think a lot too to just feel more comfortable with all of the women. She never wanted to seem like a Navy SEAL. She just wanted to seem like this was a component of her job so I think she did a really, really great job of just being credible. I think it was a lot of being aware of the radio constantly going and just that communication that happens between other cops. I wasn’t with her, so my sense was she was absorbing quite a bit.

WLE: Are you developing a few books as your next potential films?

KK: There are two now. There’s a Megan Abbott, not really a crime drama so much as coming of age into crime, called The End of Everything as well as a book by Chase Novak called Breed. I’m not sure what my next thing is going to be but I’m feeling it out.