Whether or not I’ve written about this before, I’m very much a muggle when it comes to the Wizarding World. No shame in that. Look at Dan Fogler’s Jacob Kowalski, the full-hearted veteran who easily wins me over in each Fantastic Beasts film. Fantastic Beasts: The Secrets of Dumbledore is something I’ve been curious to see, but as a muggle, it’s not because I have a deep investment in this franchise, having never read the Harry Potter books yet liking the films well enough. With these Fantastic Beasts films, however, the lack of source material has kept me intrigued, as there’s no real telling where they will necessarily go. So, while The Crimes of Grindelwald was a disappointing low point for the Wizarding World at large, I am happy to know these ‘Secrets’ were worth sharing.

Did I have to do some skimming to remind myself of what took place in the 2018 film? Yes. Good thing too, as it’s important to know where these characters stand. Fortunately, this script by J.K. Rowling and Steve Kloves is designed to catch the audience up quickly enough before getting underway with its story. Essentially, Grindelwald has a nefarious plot to make himself the Supreme Head of Wizards, and it’s up to Newt Scamander (Eddie Redmayne), Albus Dumbledore (Jude Law), and their friends to stop him.

With an ensemble cast, director David Yates does his best to give each character their time to shine. Fortunately, this third Fantastic Beasts film has a much better handle on what should be important to this series, namely the character interactions and, y’know, fantastic beasts. Where Crimes of Grindelwald suffered in overdelivering on plot and backstory (most of which did not matter), this film does what it can to get back to the spirit of the more light on its feet feeling of Fantastic Beasts and Where to Find Them, which I quite enjoyed. 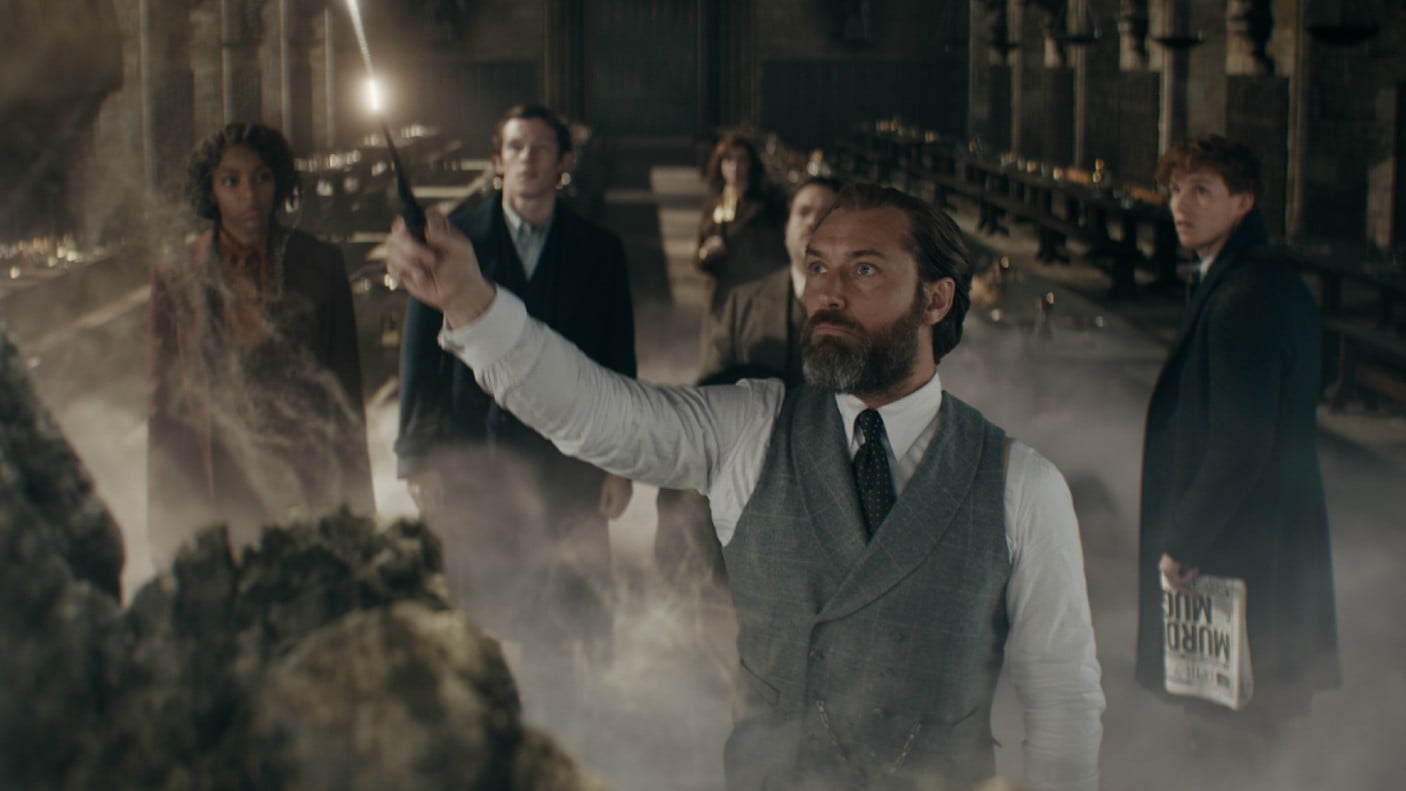 This film doesn’t always reach those heights. Part of the problem with course-correcting is having to backtrack certain aspects of a story, especially when trying to play it safe, which often feels like a stipulation for Secrets of Dumbledore. Without going into too much detail, some of these relationships seem to alter more on a “take backsies because the script said so” rather than adequately motivating the characters to make certain choices. Is it too harmful to accept? No, but I do feel like the aspects that stuck out in Crimes have been made null to simplify this film.

Of course, one of the most significant changes was in casting. With Warner Brothers and producers looking to please the court of public opinion, the studio chose to drop Johnny Depp as Gellert Grindelwald and replace him with Mads Mikkelsen. Of the issues I had with Crimes, Depp was not one of them, as he did well to give the dark wizard a fittingly menacing personality. Mikkelsen is a great performer who I’ll happily watch in anything. While it wasn’t at all a downgrade hearing his announcement, the resulting take on the character felt lackluster.

It’s an important note, as Secrets wants to do plenty to show Dumbledore and Grindelwald were once committed lovers (a notable choice for a major studio film, complicated by the controversial writer’s own current standing). Ideally, the film plays into that chemistry in a way that delivers different kinds of tension, thanks to the work of actors as strong as Law and Mikkelsen. Looking at their respective filmographies, between Hannibal and The Talented Mr. Ripley, it’s not like they are unable to make this work. Sadly, the film does seem to miss the mark on making them fit together, although there’s a bit in the finale that may show promise for what’s to come in future installments (presuming the 5-film plan is still a go).

Of course, there’s plenty of other wizardry going on that’s worthwhile. I continue to really enjoy what Redmayne is doing as Newt. His take on this outcast character, who is almost certainly on the spectrum, allows for a unique hero who has shown signs of growth in the way he tries to be somewhat more confrontational this time around. At the same time, he’s still this animal-loving magizoologist who gets to show a level of tenderness that allows the film to breathe now and again.

As mentioned, Dan Fogler continues to shine as Jacob. The guy is such a sweetheart who no one wants to see come in harm’s way. Even when used as a bumbling comedic foil, he never feels in the way of the film. Jacob is endearing, and just the introduction of him alone in his bakery does everything to sell you on the emotional journey he must go through while also being a muggle in a magic-filled world.

Jude Law also earns a few points for Gryffindor, as he coasts through a lot of this film on veteran charm. I was worried Fantastic Beasts would start to feel more and more like a series of fan service events packed inside of this non­-Harry Potter-related series, but those thoughts were quelled. Instead, the increased involvement of Law largely meant having a strong actor interact with the many different characters to help the audience get a better impression of who they are through the kindly wizard who knows how to get the best out of them. 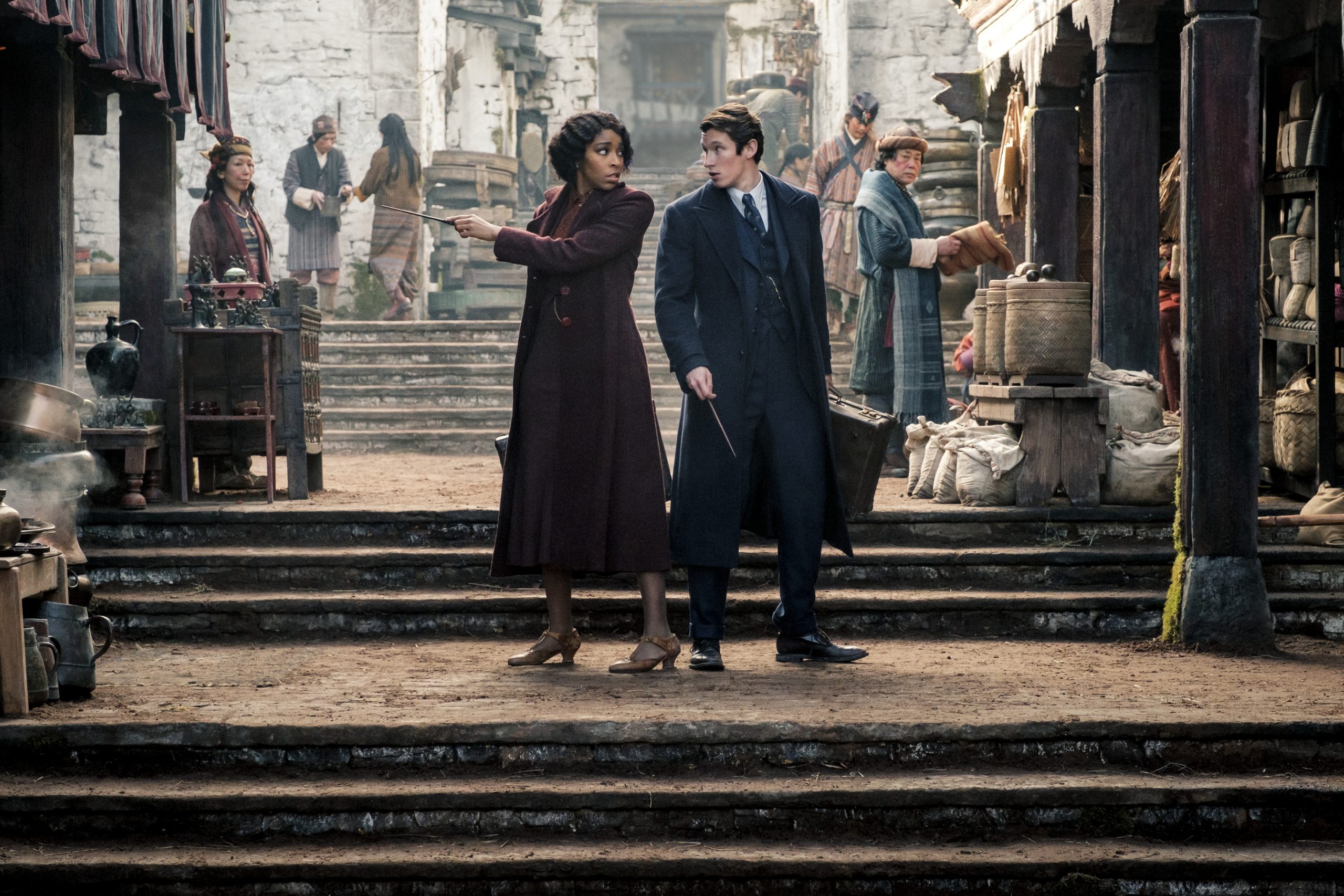 Other performers serve their purpose, more or less. Callum Turner continues to play Newt’s straight-arrow brother Theseus, though less of a stick in the mud this time around. Jessica Williams’ Professor Lally Hicks has an expanded role for this film, allowing her a chance to get up to some magic-based fun in some key sequences. Between her Mae West-inspired accent choice and the lighter nature of scenes involving her character, Lally Hicks is the sort of character the Wizarding World works best with.

Meanwhile, Alison Sudol’s Queenie is given short shrift here, which is a shame given the impact of her choices last time. Merely having expressive looks on occasion only does so much, as good as Sudol is at committing to the role. Similar things can be said for Ezra Miller’s Credence, a character featured heavily but has such little impact overall. The choice to keep him around (after very much killing him in the first film) feels like a crutch, yet I can’t say a crucial moment involving him isn’t effective.

As far as the plot goes, Secrets of Dumbledore curiously blends together some wondrous moments of fantasy (a prison escape involving Newt and Theseus is especially entertaining) and blunt commentary on real-world politics. With Grindelwald portraying a corrupt character gaining favor from weak-minded individuals in support of wizard supremacy, as he uses his power to rig an election against a female opponent, it’s not exactly subtle. With that in mind, this film wants to have its cake and magically eat it too, allowing for a dream version of its results, let alone making sure the characters involved have a less ugly charisma surrounding them.

Perhaps the mix of episodic moments involving these characters on mini-adventures combined with some forward momentum in the primary storyline is enough for me to be satisfied. With a pretty penny being spent to make these Wizarding World films look pristine (visual effects, costume design, and the art direction are all top-notch), there’s a lot to like about the look and feel of the worlds created.

Getting a rush from a dinner sequence that leads to all sorts of spells breaking out and clever uses of magic means this film is doing something right. Apply that to a variety of sequences, let alone a final 45 minutes that seems to have everything clicking into place, and there’s plenty of reason for me to find these beasts (and more) to be fantastic. Sure, it also means juggling the tone a bit, as far as featuring both Newt’s swiveling hips and harm toward fantasy creatures, but it never seemed too out of step.

As a step up from the previous film, with enough going on to have me excited for more, I’m happy to commend The Secrets of Dumbledore for keeping me on board with a series I take part in, mainly because it’s there. Knowing that a lack of adapted material means the stakes can be somewhat higher in the case of certain characters does help a bit, but achieving a level of joy from the creatures created for this film, let alone finding that fun spark in seeing magic brought to life on the big screen is worth following this spellcasting crew, even as a muggle.

Fantastic Beasts: The Secrets of Dumbledore arrives in theaters and IMAX starting April 15, 2022. 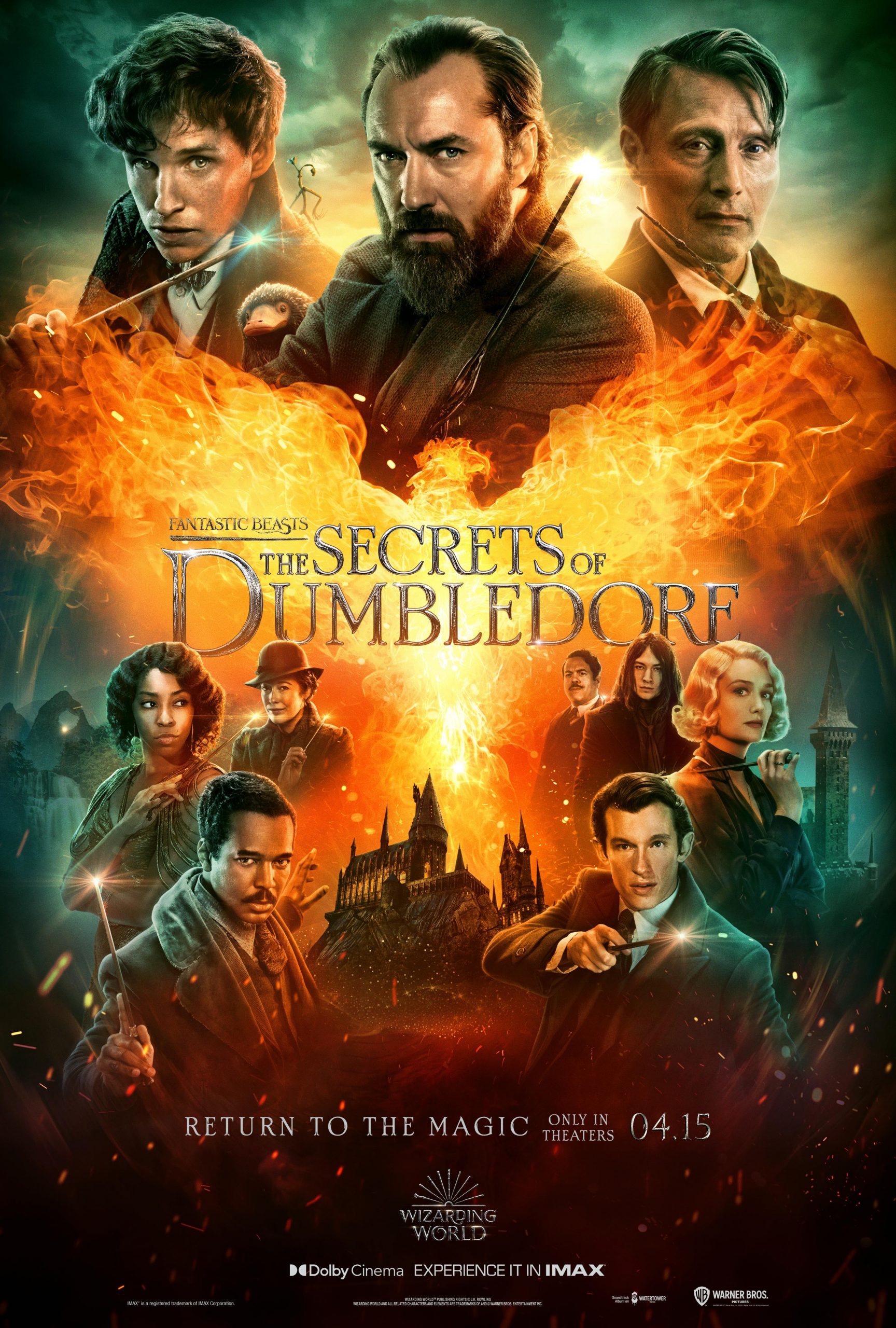 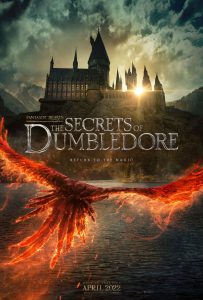 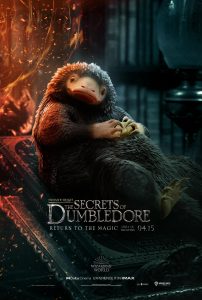 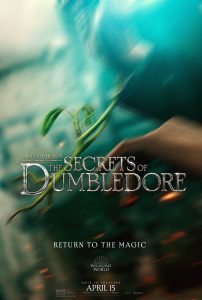 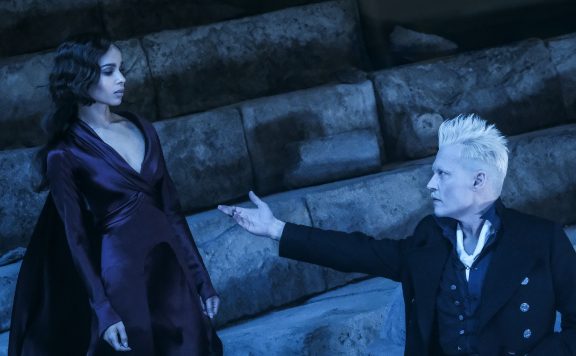 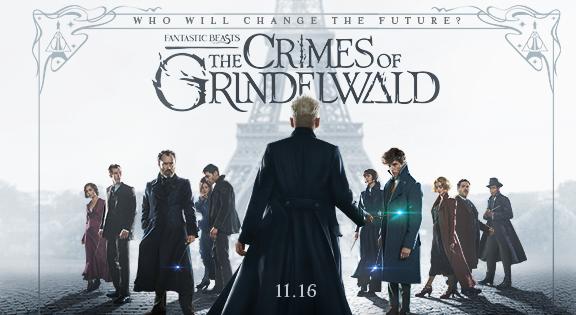 Review: ‘Fantastic Beasts’ And The Crimes Of Placeholding
November 15, 2018 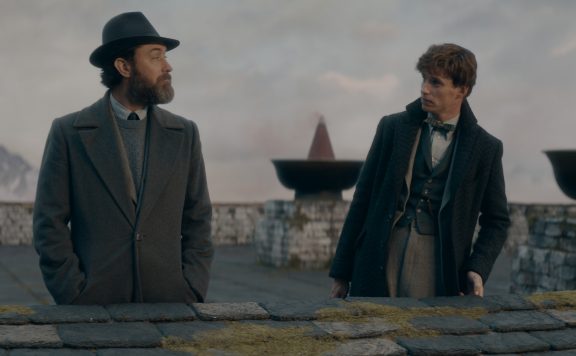 ‘Fantastic Beasts: The Secrets of Dumbledore’ Review: Not Quite As Fantastical But Still Magical
April 8, 2022

‘Fantastic Beasts: The Secrets of Dumbledore’ Review: A Respectable Return Of Wonder 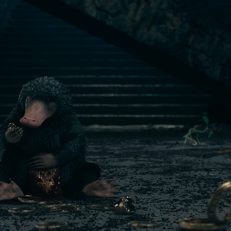 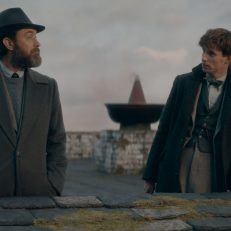 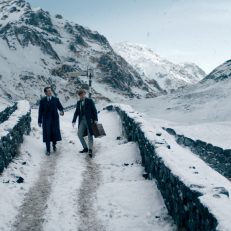 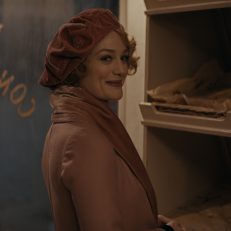 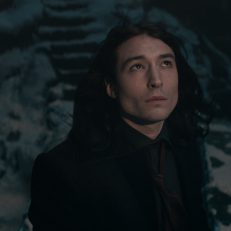 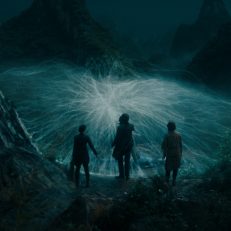 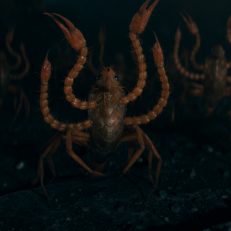 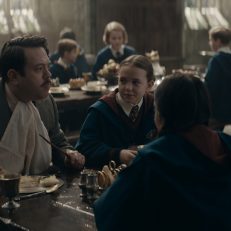