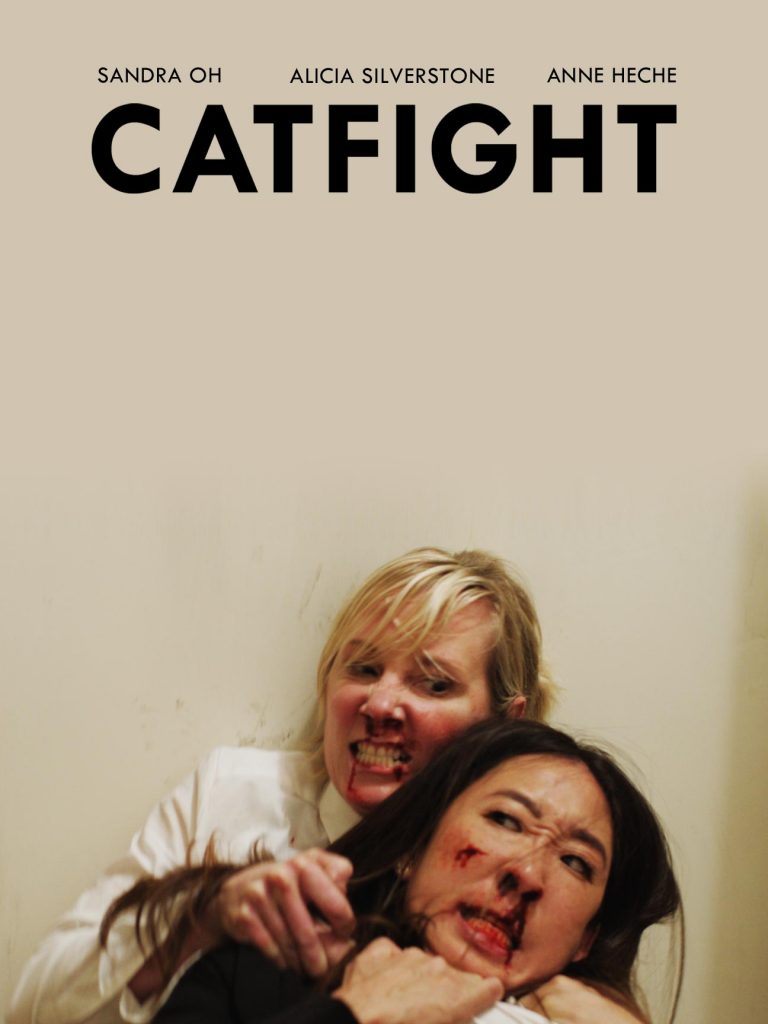 Catfight stars Sandra Oh, Anne Heche, and Alicia Silverstone. Veronica (Sandra Oh) and Ashley (Anne Heche) end up in and seemingly endless feud where they beat each other senseless and into comas. When they wake up, their lives have changed drastically, and it reignites the cycle again. The film is unapologetically critical of society in almost any way you could possibly imagine.

The film addresses many issues that are plaguing the United States. It discusses war and the ideology behind it. There is even a quote where they say “the children think they are fighting for a cause, but they are fighting for the defense industry.” It points out topics and opinions that we know but just hide under the surface. The film works in cycles of the progress of war and fighting. The film has an undoubtedly biased presentation that will appeal to some but not all. The film presents the absurdity of our health care system, businesses, and politics. One of my favorite scenes in the film is where Aunt Charlie (Amy Hill) introduces Veronica to the trees: Bernie, who is grounded and strong; Hillary who is strong but untrustworthy and Donald who is just an asshole. It is extremely amusing and got a great rise out of the audience.

Along with war and politics, the film touches upon the media as well. Aunt Charlie says “fuck the news. They don’t tell you the real story anyway.” The film pokes fun at the news even further when they show the anchor discussing war and saying that it doesn’t matter how many people have died. Following that, they bring out a man who’s job is simply to far and make people laugh. It is such a wonderful jab at the over glorified fluff that has invaded our “news.”

Art is an interesting topic in the film. It is, of course, a form of expression but the film touches upon it being something more. The film presents the idea that art is just an exploitation of people’s sentiment and then capitalizing upon it. I thought that was a really great presentation of that idea and extremely bold to put into a film. The music choices in the film were very fun, especially during the fight scenes. One scene in particular plays “Stars and Stripes Forever” was just hysterical. I couldn’t appreciate this film any more than I do now.

The performance by Sandra Oh and Anne Heche are just electrifying. The film comes alive with pure aggression and emotion during some powerful fight scenes. The intricacies of the fight scenes really lend a gritty beauty to the film and the emotions presented. They accentuate the ridiculousness of our culture and the absurdity of our compliance to it. Our rage is represented in the flying fists and the bloody knuckles of Veronica and Ashley.

The humor is so spot on and unapologetic with its criticism of society and the ridiculous nature of what we accept as the everyday. The film is creative, stunning and a total blast. The bias presented in the film will be a turn-off for some, but if you have a good sense of humor about the ridiculous society in which we live, take a seat and enjoy Catfight.