In this episode, Nick and Eve meet and she informs Nick that she slept with Rachel as Renard and knows now that Renard is cooperating with Black Claw. Eve warns him of Adalind becoming a Hexenbiest again. 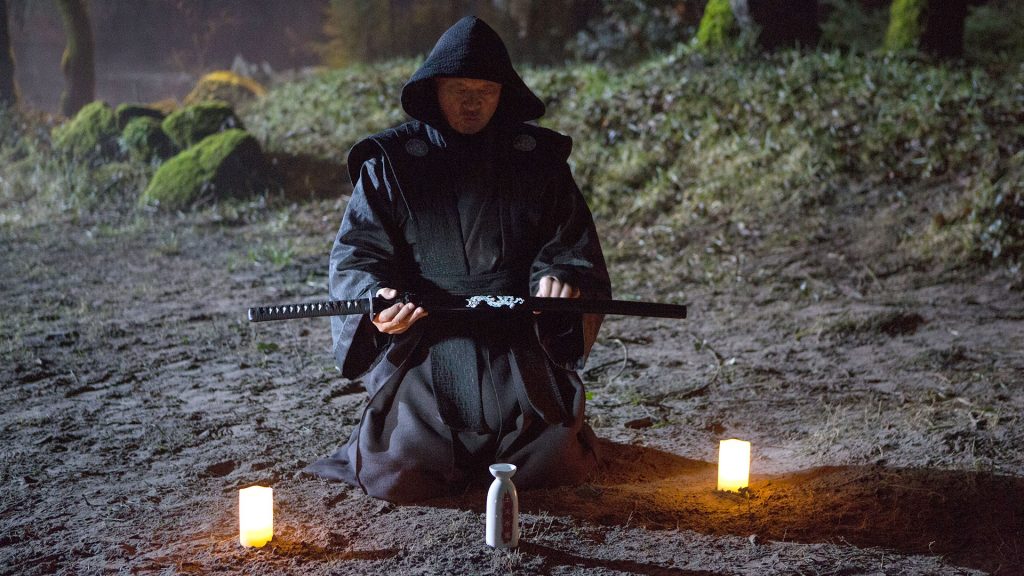 Brian, a young teenager is sitting in the basement of his house playing video games when his mom says that his friend Roger is on the phone. Brian doesn’t want to speak with him and his mother hangs up the phone. She comes down to tell Brian they are going out and to behave. Once they leave, Roger comes to the house to try to talk to Brian, meanwhile a Inugami comes and takes Brian. He awakes buried up to his neck in the dirt near a river and the Inugami slices off his head.

Nick tells Monroe and Rosalee what Eve said and it is then Rosalee tells Nick that Adalind does have her powers back. They decide that Adalind needs to be the one to tell Nick what happened. Nick decides to check on the stick and Adalind hears him coming up. She has decided to return to work, as long as she can bring Kelly.

Poor Wu is always getting the crap end of stuff and awakes from a nightmare, stumbles to the ground and notices a strange fog coming from the bathroom door, hears howling and crawls to the door. It reveals a forest and he walks through the door. The next morning, he wakes and goes the bathroom and its all fine. He laughs, but as he is leaving the room, we see leaves on his floor. I don’t know where they are going to go with this one, but it should be interesting how they heal Wu of something that supposedly doesn’t have a cure. 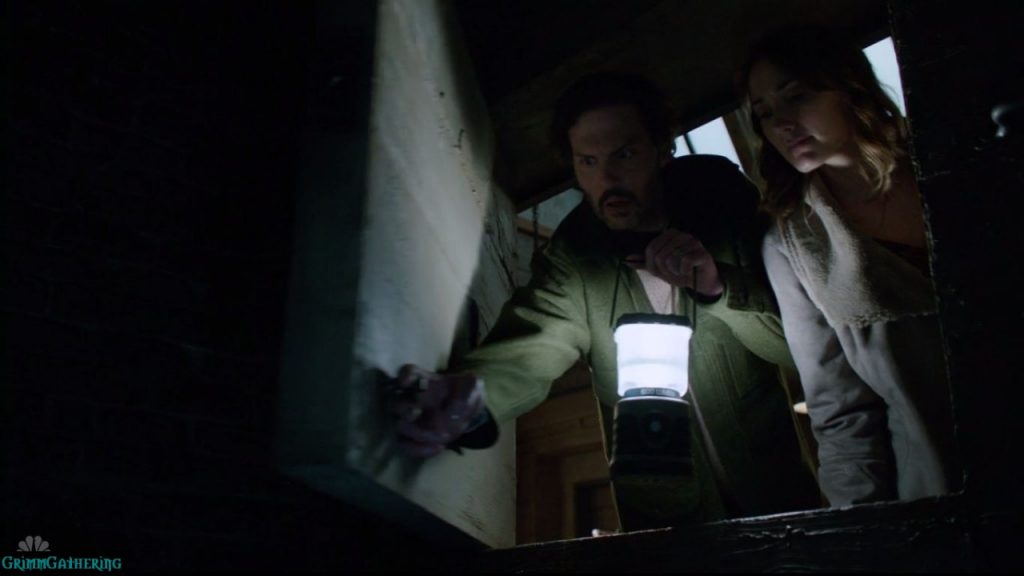 Nick and Hank meet Wu where someone has discovered Brian’s head. They decide to look at missing persons because they can’t find the body. The medical examiner tells them that it was a surgically sharp blade that cut off Brian’s head. They visit Brian’s parents and question them about Brian’s disappearance. They ask if there is anything going on with Brian and the parents reveal that he and his friend Roger were convicted of criminally negligent homicide for the death of their friend, Kuma. Nick says that Brian may have been murder. In the search, they find an origami dog, on the floor. Nick and Hank get a call that they have discovered Brian’s body. They leave the scene.

Adalind goes back to her old job to meet with her boss and say they are excited to have a Hexenbiest at the firm as he woges into a Lausenschlange and in response, Adalind woges into a Hexenbiest with Kelly looking and smiling at her.

Nick and Hank meet Wu at the place where they have found Brian’s body. It was buried up to its neck. Nick gets a call from Teri saying that her husband is furious and on his way to Jin, the father of Kuma’s house. He thinks that Jin killed Brian. When Brian’s dad arrives at Jin’s house, he enters and angrily yells for Jin. They have an altercation and Jin attacks Brian and knocks him out, but not before he sees him woge as a Kitsune. Nick tells Jin and his wife they need to get a lawyer because they need to ask them questions. Brian’s dad is taken back to the precinct and he is convinced that he was attacked by some kind of animal. Meanwhile, Jin and his attorney arrive. They question him as to where he was when Brian disappeared. Jin is still angry about Brian and Roger’s punishment for Kuma’s death. Hank asks about Jin threatening Brian and Roger in court and his attorney says he’s just emotional. They leave and Hank and Nick now have motive.

Monroe and Rosalee set off to the tunnels to explore. They think Nick is right that these were part of the Shanghai Tunnels. They discover a skeleton and decide it is time to go. They try to leave but Adalind is home and they are stuck in the tunnels.

Roger and his mom come to the precinct to be questioned. Roger tells them the truth of what happened that night, that Brian accidently shot Kuma once, but then Kuma changed into an animal and Brian dropped the gun and it went off again, killing Kuma. This is then that Nick and Hank decide they need to speak to Kuma’s parents off the record. We all know that means Grimm badass time.

They head to Kuma’s parents and they tell them they know about what happened and that they are Wesen. Jin tells them about an Inugami. He says “They’re bound in servitude to a family, and they’re only called upon to protect or avenge. And when they kill, they follow a very specific ritual.” They are bond by someone who has saved its life. They realize that it is the lawyer and Nick and Hank rush to get Roger and keep him from the lawyer Takeshi. Jin says he will join them to help stop Takeshi. They arrive just in time and stop Takeshi from killing Roger. Roger thanks Jin and tells him it was an accident and Jin believes him and forgives Roger.

While Monroe and Rosalee are trapped, they hear the elevator and hope it is Nick. It is Eve and she threatens Adalind that if she hurts Nick, she will come for her. That is an interesting turn of events because Eve isn’t supposed to have any type of emotional connection to Nick. This may develop very interesting conflicts.

Renard arrives home and finds Rachel at the top of the stairs. She has a surprise for him, and Diana, aged a few years comes running down the stairs to hug Renard.

WHAT?! They actually brought Diana back? How the heck is this going to go? Adalind is going to be torn between the love for her son and for her daughter. Nick won’t let Adalind take Kelly and she can’t have Diana without agreeing to Renard. This should be very interesting.

Left up in the air again is poor Wu and whatever the heck is going on with him. This should be really interesting.

No more stick development in this episode. I’m sure they’re saving it for the season finale.

The Shanghai Tunnels were not something with which I was familiar so I researched some to see what it is. 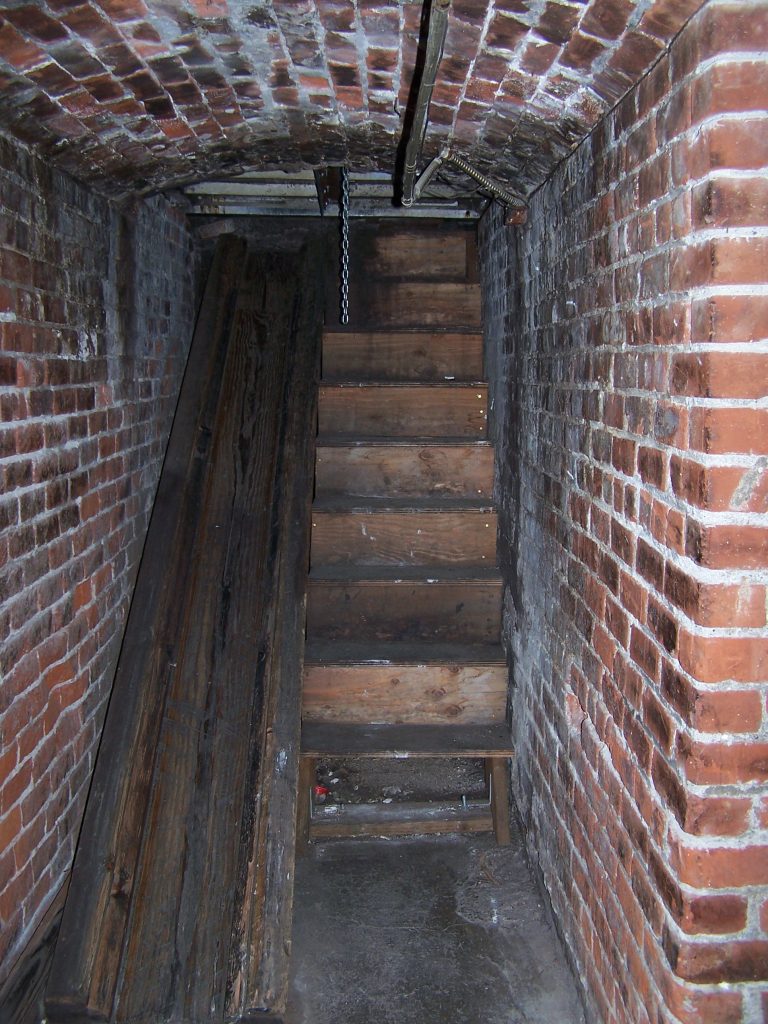 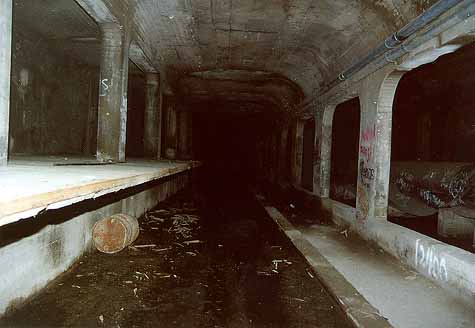 “The Shanghai Tunnels, less commonly known as the Portland Underground, are a group of passages running underneath Old Town/Chinatown down to the central downtown section of Portland. The tunnels connected the basements of downtown hotels and bars to the waterfront of the Willamette River. They were built to move goods from the ships docked on the Willamette to the basement storage areas, which allowed businesses to avoid streetcar and train traffic on the streets when delivering their goods.

Historians have stated that although the tunnels exist and the practice of Shanghaiing was sometimes practiced in Portland and elsewhere, there is no evidence that the tunnels were used for this.

The underground tunnels are reportedly haunted and were featured on an episode of Ghost Adventures.”

This should be an interesting plot device since Grimm often uses historical facts or places to rewrite what really happened to be about Wesen problems or events. I’m really interested to see where they go with this storyline and why the heck there is a skeleton down in the tunnels!

Grimm “Inugami” Review In this episode, Nick and Eve meet and she informs Nick that she slept with Rachel as Renard and knows now that Renard is cooperating with Black Claw. Eve warns him of Adalind becoming a Hexenbiest again. Br...
0
Average User Rating
0 votes
Please sign in to rate.