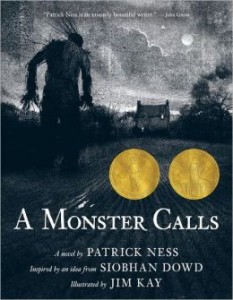 If you’re ever in need of a good, long cry, A Monster Calls by Patrick Ness will do the job wonderfully. But the novel is also far more than just a sob-fest about a family struggling through cancer. The novel recounts a child’s nightmarish encounters with a monster that only visits him at night, but also focuses on something far more terrifying: reality.

A Monster Calls is more than a children’s book, as there are so many elements that all ages will relate to and appreciate. While Conor, the first-person narrator, is for all intents and purposes a child, he makes observations worthy of someone much wiser than his age. His mother’s cancer changes the entire family dynamic, and the reader receives an intimate look into the effects of the family’s harrowing ordeal.

Conor’s journey to understand the lies he tells himself in order to cope with his mother’s illness is daunting, and most of all, terribly authentic. Ness beautifully constructs a fantastical narrative around Conor’s daily routine. The haunting illustrations crafted by Jim Kay also come in handy in this aspect of the novel. Something about actually viewing the creature in all of its glory sends shivers up and down the spine. And what should frighten Conor, doesn’t seem to make much of an impression, since he has far more to worry about than a mere monster.

All three main characters are fleshed out so well. As a narrator, Conor observes marvelously, and he expresses himself and his needs in a forceful manner. His mother’s guilt oozes off the page, shocking in its depth and power. And his grandmother’s anger and sorrow are brilliantly intertwined with Conor’s startling outbursts. Ness’ use of simplistic language to portray a complex range of emotions, frankly, astounds, and the rawness that appears in all of the family interactions often left me speechless.

A Monster Calls by Patrick Ness deserves all of the praise that has been heaped upon it since its release. I would not be surprised if it becomes a classic staple of literature. If you give the novel a read, please make certain a box of Kleenex sits nearby, and brace yourself for a heart-wrenching rollercoaster of beautiful language, genuine characters, and a plethora of emotions.