Brie Larson stars as Carol Danvers in Captain Marvel, the highly anticipated Marvel Cinematic Universe film directed by Anna Boden and Ryan Fleck. While Captain Marvel doesn’t open in the United States until March 8, 2019, several critics have already gotten a chance to see the film at an early press screening which occurred on Tuesday, February 19, 2019. In addition, Disney and Marvel will be screening the film again over the next two days.

Below are some of the initial reactions from the first screening and we will go back and update these reactions as more and more hit the web over the next 24 to 48 hours.

#CaptainMarvel finally gives us the unapologetic badass female Marvel superhero we have been craving. Brie Larson is phenomenal and the film vibrates with an intensity and immediacy that brings the audience to the edge of their seats. pic.twitter.com/1BM8kNwADv

Captain Marvel is everything that I hoped it would be. It feels completely unlike any other Marvel film. A unique and fresh take on an origin story that feels new. Brie Larson is fantastic as Carol Danvers. This is one of my favorite Marvel movies of all time. #CaptainMarvel pic.twitter.com/0ou7HU93MY

I would also like to confirm what others are saying. Goose the cat is definitely a scene-stealer but one that has a purpose. The entire supporting cast is terrific especially Sam Jackson, Ben Mendelsohn, and Lashana Lynch. They add plenty of humor and heart to the film.

Another thing about Captain Marvel is that it pays homage to the 90s from its soundtrack to the technology being used. The whole film feels like a mix between Star Trek and Galaxy Quest with a little bit of Star Wars mixed in for good measure. Seriously it’s great. #CaptainMarvel

The future of the MCU gets even brighter adding #CaptainMarvel to the mix. Really fell for @brielarson’s sass, strength & energy in the role. Same with @LashanaLynch too! Ben Mendelsohn is A+ casting as Talos. And yes, Goose is a scene stealer. 2nd viewing can’t come soon enough.

#CaptainMarvel has a great ‘90s sci-fi vibe w/ a tone unlike any other Marvel movie, really. It’s retro & trippy, mysterious & dorky. It’s funny in surprising places & badass in all the right places. It remains entertaining because it’s always changing. It’s got the right stuff pic.twitter.com/o7AvqYY63x

#CaptainMarvel is pure joy. I cannot wait for the generation of little girls who will grow up with Carol Danvers as a hero.

Captain Marvel is a blast! Has some cool surprises that I definitely didn’t see coming, and the mystery/origin it weaves is engaging and fun. Brie Larson is awesome, and makes a fantastic first step into the MCU #CaptainMarvel pic.twitter.com/oqrRtgDQrp

Facts: @brielarson is an unstoppable force as #CaptainMarvel. A supreme embodiment of the late 80’s to 90’s heroines that we looked up to, fully formed with agency and whose main relationship is with her best friend. So many girls are gonna see themselves, their struggle & fight!

#CaptainMarvel is a great origin story. Brie’s buddy cop chemistry with @SamuelLJackson is so much fun and her relationship with Lashana Lynch is the real heart of it. Ben Mendelsohn and the cat both steal the show.

Really loved #CaptainMarvel. It’s a little wobbly at times but only because it’s so ambitious. It’s beautifully constructed, hilarious and offers tons of surprises. @brielarson obviously rules but Ben Mendelsohn is the surprise MVP. pic.twitter.com/yQLQGl2Yt0

#CaptainMarvel achieves its main goal of being a good presentation of the character. Those looking for an entertaining adventure that connects with this universe will be satisfied. In terms of ranking, I would place it in the middle section of the MCU.

OMG… #CaptainMarvel was so freaking good. The music, man. It takes you back too! #GooseTheCat is the real MVP. pic.twitter.com/WCNqDbPGGB

#CaptainMarvel is a cosmic, cool, honest-to-goodness science fiction adventure. @brielarson is an inspiration, as is @LashanaLynch. Like the best Sci-Fi, @MarvelStudios’ latest offers a timely moral tale. It’s not what I expected. It’s better. #HigherFurtherFaster pic.twitter.com/KOvbbziuKh

Just saw #CaptainMarvel and LOVELOVELOVED IT!!! Brilliant work, kick ass story and fantastic villain. Brie Larson was awesome and #Goose stole the show! Go see it right away and don’t get… https://t.co/7RInEGmfk8

Just got out of an early screening of #CaptainMarvel … this film… is… AMAZEBALLS! Brie Larson is the ultimate female badass ? SOOOO many epic action set pieces that many marvel geeks like me will DROOL over!! This isn’t the film we WANTED.. its the film we NEEDED?

#CaptainMarvel is a great expansion of the MCU as we know it, and is even better at setting up more things to come. @brielarson shines as Carol Danvers, bringing the character uniquely to life. A great throwback to 90’s action films that fans will love. Oh, and Mendelsohn rocks! pic.twitter.com/AoNueBvzFI 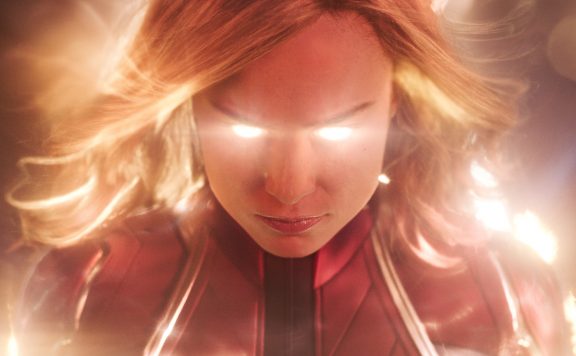 Captain Marvel initial reactions are in…here’s what critics are saying.