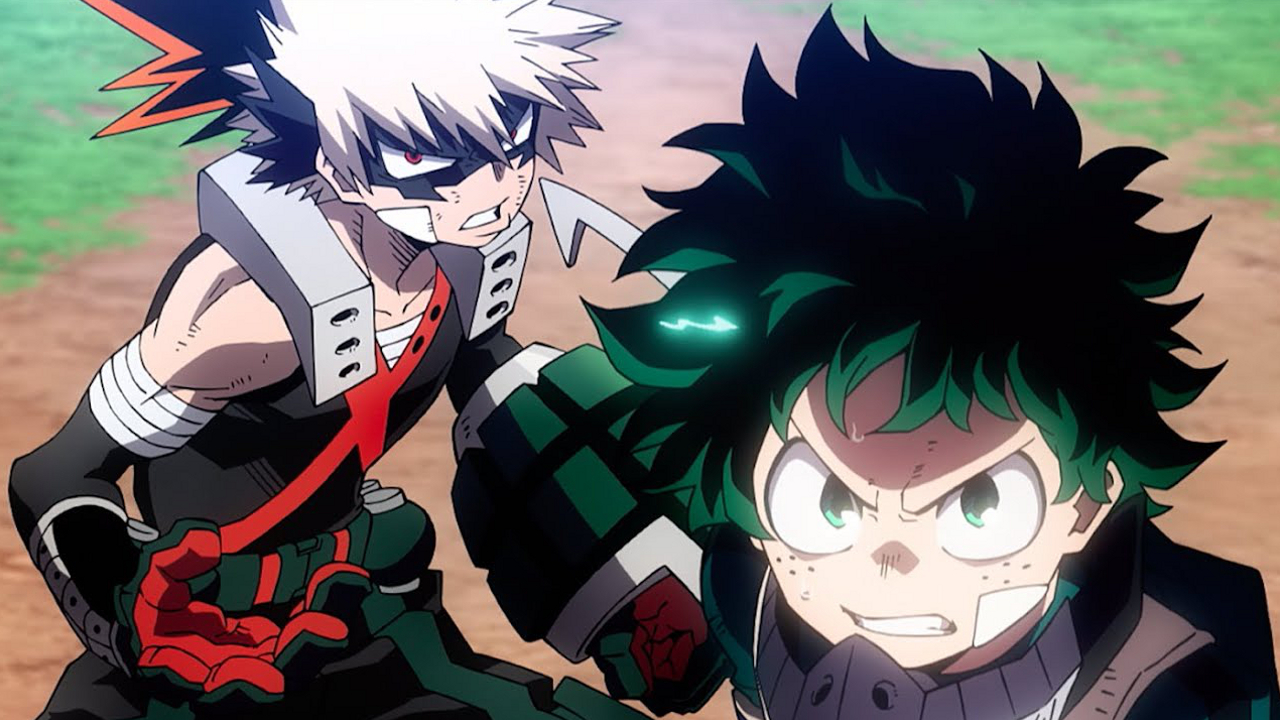 Two years ago, My Hero Academia was primed for the big screen with its first cinematic spectacle, Two Heroes. But like countless other anime features, Two Heroes remained inconsequential to the series’ later arcs. It’s unfortunately the nature of the medium. While hailed as a Plus Ultra experience, the 2018 side adventure simply tested the waters for a more pronounced super showdown in My Hero Academia: Heroes Rising.

Like the previous film, My Hero Academia: Heroes Rising fills in some narrative gaps as the fourth season continues to unfold. With All Might (voiced by Kenta Miyake) retired, the League of Villains have aligned with Nine (voiced by Yoshio Inoue) and his handful of powered minions. Similar to series big baddie, All For One, Nine is able to steal and wield multiple quirks (superpowers) at once. Though as his name suggests, he’s capped off at nine different abilities. Nine’s path to more power intertwines with the series’ top heroic students from UA High School. Deku (voiced by Daiki Yakashita), Bakugo (voiced by Nobuhiko Okamoto), Todoroki (voiced by Yūki Kaji) and the rest of the 1-A class have taken residence on an isolated island, aiding the locals. Nine pursues two island siblings, Mahoro (voiced by Tomoyo Kurosawa) and Katsuma (voiced by Yuka Terasaki), forcing Deku and company into one of their greatest battles to date.

My Hero Academia: Heroes Rising certainly is tailored more towards its hardcore fans than Two Heroes was. It’s no secret the anime is notorious for its flashbacks. After three seasons, we’re well aware of why Deku idolizes All Might or the lifelong rivalry between teen protectors, Deku and Bakugo. While Heroes Rising glimpses into the past from time to time, those dynamics are more understood rather than put on display for the countless time. In exchange, Yōsuke Kuroda’s screenplay dedicates more to the near apocalyptic confrontation. Though one has to ask, who’s going to clean up this epic mess when it’s all said and done? Nevertheless, Deku and Bakugo remain in the forefront as two sides to the heroic coin. However, favorite supporting characters like Todoroki, Tokoyami, Kirishima and Yaoyorozu are afforded memorable moments of heroism in the film’s epic throw downs. Even Mineta emerges more as a hero this time around than his typical purple pervert self.

With My Hero Academia: Heroes Rising, our isolated heroes face carnage and villainy like never before. Stakes are at an all time high, even though this is a self-contained arc. Without pros like All Might, Eraser Head (Aizawa) or Endeavor backing them up, now is the time for Class 1-A to prove themselves as the next generation of heroes. That permits Heroes Rising to be a kinetic passing of the torch on the grandest of scales. Deku’s basically spent his entire UA career living up to All Might and the legacy of One For All. Bakugo, however, is fueled by his eternal rage, determined to surpass the Symbol of Peace as the greatest hero ever. But this is the perfect showcase for the pair to demonstrate their worth and dependency on one another. Teamwork is consistently highlighted through the visually popping battles despite Bakugo’s explosive antagonism towards his classmates.

My Hero Academia: Heroes Rising excels in it fluid storytelling, stripping away the anime’s episodic feel. While many My Hero arcs prolong for hours at a time, its cliffhangers tend to break up the narrative flow. Heroes Rising goes beyond those narrative confines both from a story and visual perspective once the ball gets rolling. While readers of the manga know where the future of My Hero Academia is headed, it’ll be a difficult feat to top the overall scale featured here.

For the most part, My Hero Academia: Heroes Rising evolves beyond what Two Heroes brought to the big screen in 2018. Bigger and bolder in every conceivable way, this is the dream sequel for anime die-hards. While there are rumors that this is the final My Hero Academia movie, what a cinematic send-off indeed.