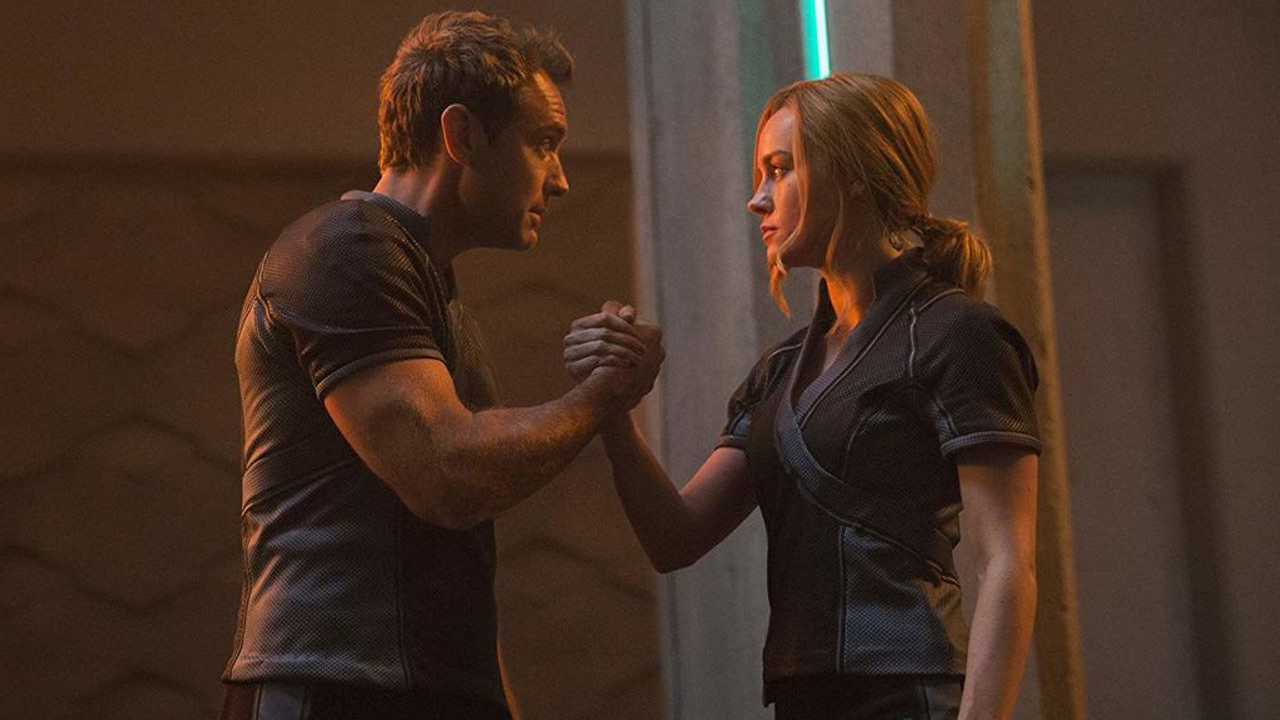 Brie Larson’s Captain Marvel wasn’t exactly part of the unprecedented line-up in Avengers: Infinity War. Nevertheless, her presence was heavily felt beyond that film’s credits as Nick Fury’s ace in the hole. It was that gleaming hope we yearned for after being defeated by such a ballsy cliffhanger. Nearly a year since that simple tease, moviegoers have theorized about her role in the upcoming Avengers: Endgame. But before that epic culmination next month, Marvel offers much-needed insight on their latest superhero.

Set in 1995, Captain Marvel plays host to an intergalactic war between the Kree and its elite Starforce military and the shape-shifting Skrulls. During a botched recovery mission, Starforce soldier Vers (Larson) is captured and probed by her reptilian adversaries. Extracting her fragmented memories, the Skrulls realize that Vers is no Kree. In fact, she’s Carol Danvers, a modified human without any knowledge of her past. Vers escapes Skrull captivity and finds her way back to Earth. There, she hopes to uncover her past and information on a weapon vital to the Kree-Skrull conflict.

Captain Marvel comes at a very unique time in the Marvel Cinematic Universe. While superhero behemoths like Captain America: Civil War and Avengers: Infinity War play on endless years of build-up, Marvel is securing its future with Spider-Man, Black Panther and now Captain Marvel. And it’s no secret that MCU veterans like Iron Man and Captain America will retire the suits and shield much sooner than later. Nevertheless, the future of this ever-expanding cinematic universe is in competent hands. Despite Marvel rapidly wrapping up Phase Three, Captain Marvel still emerges as one of Marvel’s first films out of the gate. That’s not a fault of the film, more so its inevitable position as a prequel. Captain Marvel intentionally restrains its scale and toys around with nailing down a signature identity. In Phase Three alone, we’ve had a psychedelic acid trip, a John Hughes high school romp and a few quirky intergalactic comedies. Which direction does Captain Marvel want to take?

Initially, directors Anna Boden and Ryan Fleck (Mississippi Grind) lay down the groundwork for a detached space cop adventure. But once Vers lands on Earth, Captain Marvel finds its footing as a nostalgia-driven buddy cop comedy. While Stranger Things and retro gaming have made the 80s relevant once again, Captain Marvel shifts gears to embrace its mid-90s backdrop. For millennials, there’s just something satisfying about revisiting a Blockbuster Video in all of its glory or jamming out to some classic Nirvana or TLC. It’s more understated than the stylized backbone of Guardians of the Galaxy. Still, it works within the confines of Captain Marvel’s self-contained journey towards finding herself.

Transitioning from her indie roots in Short Term 12 and Room, Brie Larson has evolved into quite the mainstream role model overnight. With oversexualization and forced romance out the window, the message is crystal clear that the mission is top priority. While Black Widow (Scarlett Johansson), Scarlet Witch (Elizabeth Olsen) and Gamora (Zoe Saldana) have all played vital roles in the MCU, Larson’s Captain Marvel soared higher further and faster. That’s not just her mantra as an Air Force pilot that she quotes to her best friend Maria (Lashana Lynch). It’s a sense of the potential that her character can unlock. Trailers have shown her big “Super Saiyan” moment, though a majority of the film is effectively low-key. Boden and Fleck are more concerned with uncovering the past and navigating muted emotions. But that’s doesn’t deny Larson some quips here and there either. It’s practically necessary teaming up with a seamlessly de-aged Nick Fury (Samuel L. Jackson) and scene-stealing feline, Goose the Cat.

In this empowering origin story, Captain Marvel purposely holds some of its cards back on Carol Danvers’ true potential. But as a reserved segue into Avengers: Endgame and co-prequel to most of the Marvel Cinematic Universe, it’s a pleasing enough tease for what’s to come.